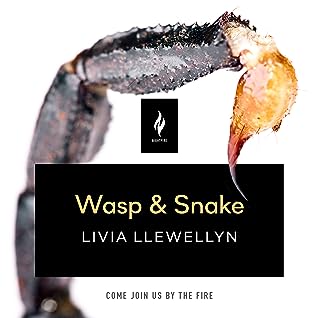 i was unfamiliar with the aesop fable that this story is having its way with, but i’ll save you the google and plop it here for you:

A wasp seated himself upon the head of a Snake and, striking him unceasingly with his stings, wounded him to death. The Snake, being in great torment and not knowing how to rid himself of his enemy, saw a wagon heavily laden with wood, and went and purposely placed his head under the wheels, saying, “At least my enemy and I shall perish together.”

this reconfigures the fable with human participants, employing some effective body horror to tell the tale of a supernaturally-enhanced assassin-for-hire enacting a revenge-plot on behalf of her cuckolded employer, with an outcome that does not go to plan. it dabbles a little too much in the realm of cosmic horror for my personal liking, but the parts the my feeble brain could grasp were chillingly good.