That night, I slept with my arm around him; he weakly returned the hug with his solitary paw. It was a white summer night, a kind of gauze with dusky twilight, no slumber, but a yearning for it. The bear smelled of dust, dust and old age, infirmity, decades, millennia. Opening my eyes in the underwater dimness of this alabaster midnight, I could see the black thread hanging from his miserable little eye socket. I stroked his wooden head; it was covered with scars. I touched his ears.

although i am a grown-ass woman, when it comes to stuffed animals, i am myself a big ole softie. and when those stuffies are old and worn and LOVED, it activates all of the feelings in me that are supposed to be attached to babies, small humans, alla that biological imperative kinda stuff.

i have experienced misty-eyed heart-swellings over books like Much Loved, Dirty Wow Wow and Other Love Stories: A Tribute to the Threadbare Companions of Childhood, Dirty Bow Wow, and Chewed, and if you know of any others like these, please send titles my way.

and this story, about someone reuniting with a beloved old friend, battered now by time and neglect—as short as it is, as achingly unresolved as it is, stirred my feels because i understand this character’s swirling nostalgic remorse down to my core.

I found the bear or, to be more precise, his remains: a furry wooden frame with a single front paw, a plastic button for one eye and bits of hanging black thread for the other.

I grabbed him, holding him tight, clutching his dusty, bristly torso, and closing my eyes to keep the unexpected stream of tears from raining down on him.

it’s a lovely, forlorn little story, and i will never be too grown-up to feel the scouring, heart-panging joysorrow of a fuzzy friend loved into oblivion. 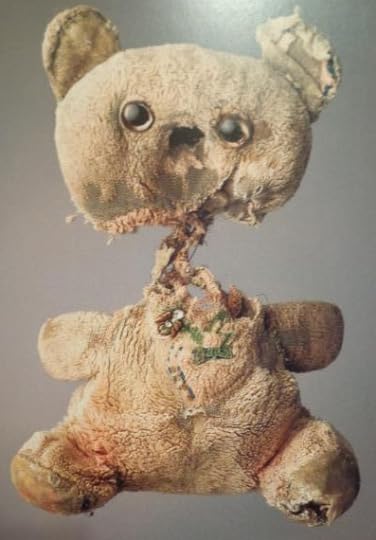