The Tinder Box by Kate Elliott
My rating: 4/5 cats

The king had grown somewhat stout from the soldier I had met thirty-three years ago. He had the expression of a man who will speak politely to your face and then lop off your head the instant you don’t answer questions whose answers he has no right to know. He looked me up and down with the measuring eye of a man who loves his pleasures, but his look held no tremor of recognition. How could it, when he had last seen me in the guise of an old hag? He was the sort of man who knew for certain that witches took to witchcraft only because they couldn’t interest a man like him.

this story is like a snuggie® wrapped around hans xtian andersen’s The Tinder Box; a fairytale i always forget about until i get to that detail about the guard dogs with the various-sized eyes, and it gives me glad-goosebumps. those doggies deserve their own show.

if you’re wondering why social progress, in our world, is slow, and justice is delayed, it’s probably because the immortal beings who are for whatever reason invested in our struggles can afford to take their time fomenting revolution through elaborate, multistage plots; a skull waiting “for the right heart to pass by” for years while we mortals live and suffer and die pawnishly. sure hope that right heart passes by soon, yeah?

still, it’s nice that they want to intervene and help us save ourselves, even when they get all corny about it.

Those who fight for justice will die or they will live. Fate is beyond my power. But I will prick their hearts until they either choke on their own blood or are forced to swim in the river of truth.

i’m being glib because i woke up in a MOOD, but i enjoyed the story and maybe YOU WILL, TOO! 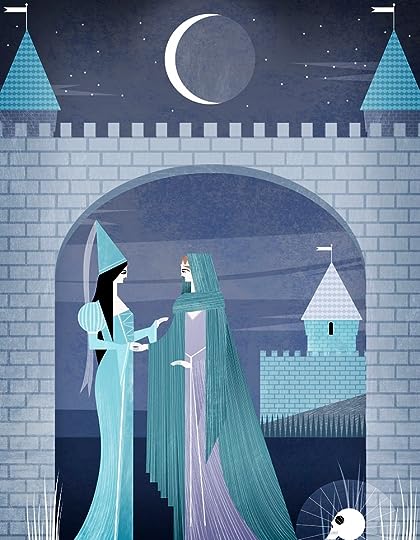