A Rumor of Angels by Dale Bailey
My rating: 4/5 cats

the only thing to do was move forward into the bleak mystery of the future. You moved on. There was nothing else to do.

a lovely atmospheric story i’m not sure i fully understood or appreciated. i loved the writing, but the story itself seems a little off-brand for tor—it doesn’t have much in the way of a SFF vibe; that ending could be divine/supernatural, or it could be geological anomaly, who’s to say?

in any case, for the bulk of the novelette, it’s strictly realism—a dust bowl migration story that reads like steinbeck when it’s optimistic, and mccarthy when it’s not. it’s in no hurry to get anywhere, which is maybe why it feels like it doesn’t go anywhere—it’s well-written and the prose is evocative, but when you strip the story of its pretty wrapping paper, it’s about View Spoiler »a boy who abandons his father—who literally needs him to survive—and then becomes a parasite to a struggling family before stealing their child’s most treasured possession « Hide Spoiler. he’s not written as an antihero, but it’s hard to root for him, bullet-pointed out like that.

i honestly think it would have been a stronger story if he’d just cut out the angel stuff altogether, because what’s there is so brief and ambiguous—it could just be extreme thermal drafts or something (i’m not a meteorologist—those are things, right?)

anyway, the descriptions-of-place-are excellent and hardship-narratives are all my kind of thing, but the ending fell flat for me and it doesn’t feel complete, so if there’s more to this journey somewhere, lemme know and i’ll read it and reassess. 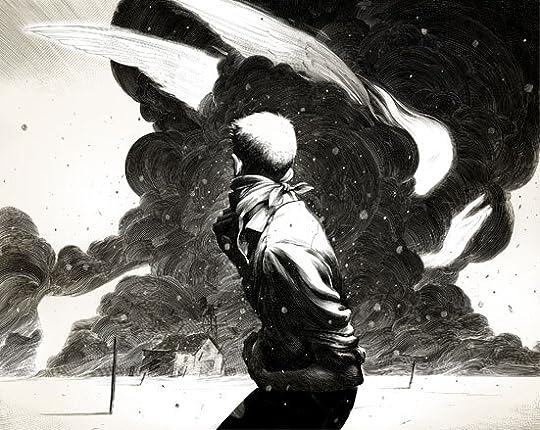