Sing a Song of Sixpence by Lilli Carré
My rating: 3/5 cats 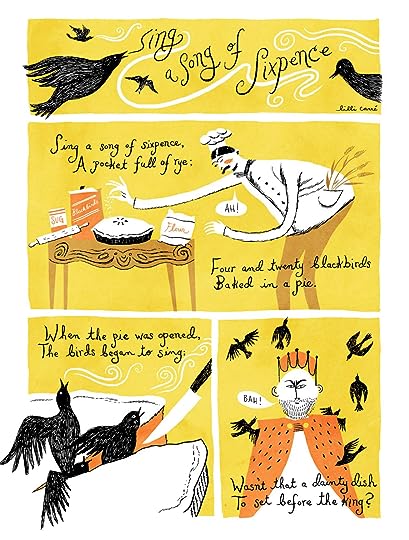 two days ago, i read Babycakes for this project, and entreated y’all thusly:

five pages of sequential art n’ narrative. you have time for this.

and so but maybe some of you STILL felt you had far too much to do to because HOLIDAYS, so here i am again, saying WHAT ABOUT THIS, THOUGH?

this one is THREE PANELS OF ART and the only words are a nursery rhyme YOU ALREADY KNOW and the whole thing is BRIGHT YELLOW.

YOU HAVE TIME FOR THIS!

i didn’t mean to choose a story that feels like a cheat, but goodreads was down for most of the day (LGM) and i had to get a quickie posted (LGM) and i promise to do a long ‘un tomorrow to make up for it (LGM).