The Tale of the Three Beautiful Raptor Sisters, and the Prince Who Was Made of Meat by Brooke Bolander
My rating: 4/5 cats 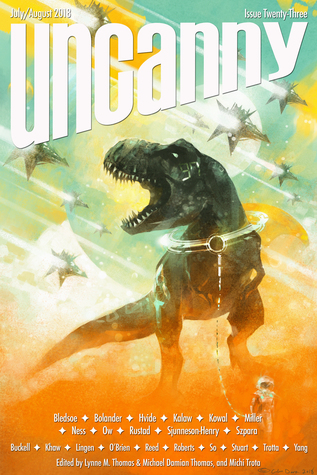 The strength of the pride is in the many. Split us apart and we are nothing, but together—oh, together—there is nothing we cannot bring crashing and spouting to earth.

this is pure brooke bolander goodness. every time i see her name on a story, i’m pretty confident i’m going to dig it, and this one was no exception. a fairytale reversal where the ‘monsters’ are three dinosaur sisters—They lived in a wood together, they stole sheep and cattle together, and all in all, there was no tighter-knit hunting pride of matriarchal dromaeosauridae between the mountains and the sea.

when a shiny blond prince who is too unimaginative and coddled to recognize danger wanders into their forest, the sisters’ formidable hunting prowess is stymied by his lack of fear, and the youngest sister decides to investigate the matter; allowing the prince to take her back to his place, so she can determine if there’s some bigger threat headed their way.

once in the kingdom, she suffers the indignity of being stabled like a beast, playing nice while she’s taking stock of the situation. she meets the prince’s betrothed; an intelligent and powerful woman underestimated and reduced to an ornamental caregiver for prince dum-dum.

the two have much in common, and much to discuss.

it’s a story about the wrong people in power, the snowballing of uninformed decisions, of fast-grown confidence, and how cats can never be fooled. it’s a fairytale with a happy ending…for some, and even a lesson or two, if dum-dums can be taught.

and it’s got all those great bolander lines:

Humans are very soft and spook easily. One brush with fangs in the dark and they bruise like dropped peaches, never understanding that life is a series of extinction events barely avoided.

this is a delicious and humorous story, and i’m so glad to be back on the short story project!