A Clean Sweep With All the Trimmings by James Alan Gardner
My rating: 3/5 cats

DECEMBER 5: A CLEAN SWEEP WITH ALL THE TRIMMINGS – JAMES ALAN GARDNER 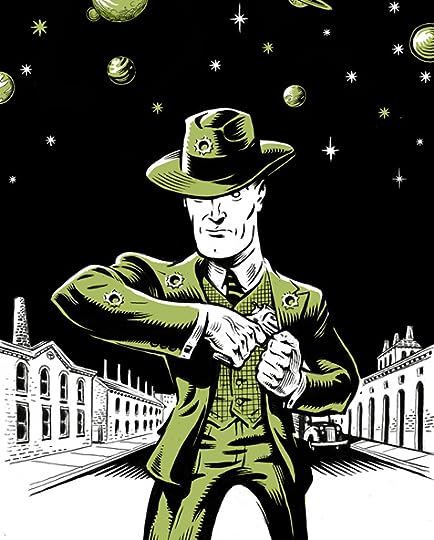 “New York has the finest messes in the universe.”

this is the SECOND free tor short i have read that was written as a tribute to Damon Runyon, after The Tallest Doll in New York City (which is free to read here). have i ever read runyon himself? nope, but it’s not difficult to understand his whole deal without reading him: guys, dolls, speakeasies, tommy guns, lingo, got it. this story adds sci-fi elements to the mix, so you get passages like this:

Carl asks, “Does anyone know what these spacemen are up to?”

“Many guys will give you answers,” I say, “but they are talking through their hats. Nobody knows why spacemen come all the way from Mars or Jupiter just to kill dolls who are friendly for cupcakes. Maybe a spaceman boss loses his doll to a busboy, and it drives him screwy. He shoots all the dolls on Jupiter, but it does not make him feel better, so he sends his spacemen here to shoot some more.”

“That is bad,” Carl says, looking grim. I never see Carl look this way. He never laughs, but never frowns either. Philosophers do not get worked up.

it’s a fun story, if a little silly. but OH, if only we had a carl of our own right now, he would nip this pandemic in the bud with his cleaning skills. ALTERNATIVELY, y’all could stop going to your quarantine speakeasies for like two weeks and stop making such a big deal over having to wear a mask for the 20 minutes you’re going to be in a store FFS.

think how many marshmallows we can have in the future if we temporarily stop marshmallowing right now!!