in this book, a lady has sex with a bunch of werewolves.

oh, dear. that’s pretty lazy, right? and i know you people YOUUUU PEEEEOPLE expect more from me with my monsterporn reviews, but FULL DISCLOSURE – there was an unexpected wine party at work, and i am all sorts of intoxicated, so no one knows what will come out of my mouth at this point. but i guarantee you it will not be anything that came out of a werewolf’s body.

and i am not too drunk to know that taking a nighttime “shortcut” through central park in a tight little skirt and stiletto heels is a stupid-ass idea. and not only because of the sexxiness of such an outfit in a part of town that is pretty much dead after-hours, but wearing stiletto heels in a park is a dumb-ass idea no matter what. stiletto heels are for runways, bondage clubs, and parties. carry some walking shoes in your bag. city living 101.

and if “central park” is in any way shortcut to you – i.e. – you live ANYWHERE NEAR CENTRAL PARK, you can afford a fucking cab. cabs are god’s gift to drunk chicks in uncomfortable shoes. even if you are a lightweight three-pinot drunk like lucy. i drank way more than that tonight, and i was wearing sensible shoes, and survived the subway 100% unmolested. yay, me!

Ahead, the trail led through a dark arch beneath one of Central Park’s stone bridges. The tunnel beneath was only twenty feet long, but it looked like the doorway to hell despite the weak overhead bulbs illuminating the old, gray stonework.

oh my god, have you never watched SVU?? those are all rape bridges. and really easy to just WALK AROUND, even in stilettos. GO THE FUCK AROUND! 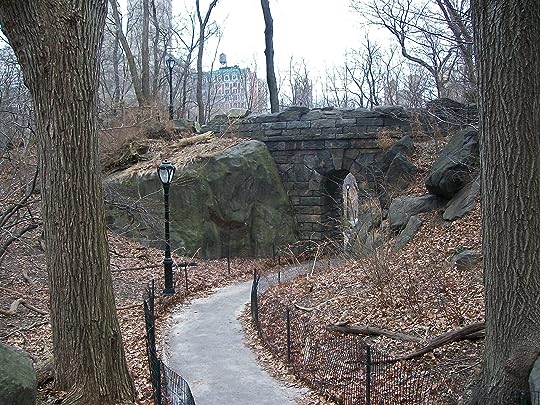 but whatever – lucy decides to waltz under rape bridge through rape tunnel and a homeless fellow accosts her and says, “Woo, heya good lookin’…Hey, can you spare a dollar? I need somethin’ to drink… and some pussy.”

which is apparently how much pussy costs to men living under a bridge.

but lucy doesn’t add it all up, and with a tear rolling down her cheek, says “I don’t have any money, just leave me alone.”

and the homeless wino speaks very slowly to the three-pinot girl and tries to make her understand that the pussy he is referring to is her own when WHAMMO!!! something barrels into the wino and bowls him off the path into THE DARKNESS.

and there are noises. wet tearing noises.

and then lucy sees a pair of yellow eyes…at the far end of the tunnel, gleaming in the darkness beyond the light bulb’s reach. A wolf’s eyes.

because lucy is a fucking expert in veterinary opthalmology all of a sudden.

and just a drunken interjection. you know what stilettos are good for, besides making the line of a woman’s leg unbelievably sexy? stabbing motherfuckers in the eyes. just a free tip for you ladies who insist on walking through poorly lit giant urban parks after hours in party clothes. jeez louise.

so she sees three wolves, and suddenly they turn into men. naked men. and this is not alarming to her, because WHY ON EARTH WOULD IT BE?

she is perplexed, sure, and thinks that someone must have slipped some shrooms in my pinot noir which is idiotic, because nasty-tasting sediment and all, but she’s not freaking out enough, IMHO, probably because this nude stranger has a really big penis. and is a freaking werewolf. and lucy has not really shown herself to be particularly bright.

soooooooo as a “hey, thanks” for rescuing her from being lewdly propositioned by a smelly old wino, she has the intercourse with three werewolves. which doesn’t seem like a good deal to me, but i am someone who makes smart decisions, so maybe this is just dummy math or something.

many entrances are explored.

she feels an overwhelming urge to pee.

the werewolves utter pillow talk like “Room for one more?”

(spoiler alert: there is room for one more)

the three werewolves breathing grew labored and heavy until Lucy realized they were growling, deep, hungry rumbles that made her think of a snarling pack tearing apart an elk.

Was she the elk?

you are worse than an elk. you are a dope.

but it’s cool, because she is totally enjoying having the intercourse with three half-beast strangers who have just murdered someone in front of her. enough to desperately ask, “Will I see you again?”

AND THEY TOTALLY BLOW HER OFF BECAUSE WEREWOLVES DON’T LIKE NEEDY CHICKS.

not sure what the takeaway message from this is meant to be, but that’s all i have in terms of a response.