Mounted by a Monster: God Of Wood by Mina Shay

just when i had begun to despair that i had reached the very apogee of imaginative monsterporn, and would have to slog through MORE werewolves, MORE aliens ad nauseam, mina shay comes through with a GOD of WOOD. which isn’t even a thing. so thank god for the fertile imagination of monsterporn writers. you are all stars.

unfortunately, this one wasn’t awesome. strictly in terms of being funny/fun to review, if you are reading these for the sexxy bits, this one has them. and it’s got a truly gobsmacking premise, but it’s very short, and it lacks some of the silly bits i have come to crave from my monsterotica. but never fear – there is still fun to be poked!

so one day, lindsay is blithely carving up one of her creations when she hears someone enter her studio. but it is not aaron, oh no – aaron has been incapacitated by a creature wanting to know who has been cutting down all the hemlock, and has come to investigate.

He was roughly humanoid in shape. Two arms, two legs and a central trunk and head…His legs looked like two thick tree trunks and were covered in bark. His arms were smaller, smoother tree limbs that bent where an elbow should be and ended in several long vine-like tendrils instead of a hand with fingers. His face was more smooth bark, however moss grew on his face and formed a kind of beard. In fact, she noted the patches of moss occurred wherever a human man might have hair: on his head, the area that correlated to the armpit, there was even a patch of moss down where the two leg trunks met up with his hardwood abdomen.

and what does he want?

“I am the god and protector of this hemlock wood, and you will answer for your crimes.”

lindsay is much cooler under pressure than i would be if a giant tree came into my place and started bellowing at me.

“Hey slow down a moment there, Mister Hemlock! What crimes do you think I committed,” she challenged him.

“Oh,” she said, realization crossing her face. “These are all made from hemlock branches. It’s the hardest of the soft woods, you see. And there’s a marketing angle, too. Hemlock causes death if taken in large doses. But our product means women all over the world can take in smaller doses so as to achieve the ‘little death,’ It’s our company tag line.”

he is unimpressed by this businesswoman’s (s)explanation, but that doesn’t stop her – she babbles more of her mission statement, like she’s a girl scout selling calendars in july.

i mean, a-plus for effort, but were the situation reversed, i doubt lindsay would be super-thrilled to learn that her toddlers were being harvested by tree-creatures to shove into their knotholes 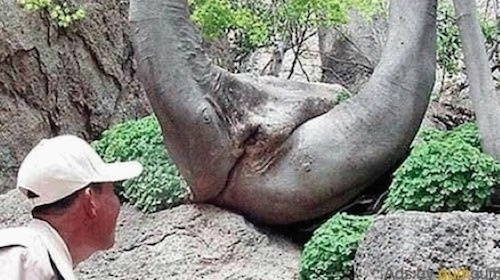 and the GOD of WOOD is not swayed by her sales pitch.

i think that when you make sex toys out of another person’s buddies for profit, you automatically forfeit the right to get offended at personal questions.

and GOD of WOOD agrees. so he’s going to make sure that all the trees stolen from his protected grove are used and used well. he is going to test drive those puppies all up in their creator. but does a tree even know how to please a lady?

“I possess the collective knowledge of every tree in this forest. I know what’s been done under the boughs and the cover of darkness. It’s time to put some of that knowledge to use.”

and it begins. and GOD of WOOD begins to disrobe her.

Lindsay’s chest was small enough that she didn’t always wear a bra. She briefly wondered how the tree god would have managed the intricate clasp on a bra had she been wearing one.

The prehensile vine-fingers pulled at her top button until it popped free. Hemlock then deftly unzipped the cut-offs.

and then FINALLY she asks herself the question that these heroines always ask themselves, always way too late:

What am I doing?”

you are doing the GOD of WOOD, sweetie.

and he uses the first one upon her, with all of his observed skillz, and brings her a little death.

there, that fwiend has served his purpose.

lesson one: you are never free of your own past failures.

Realization struck home. Lindsay was being mounted by a god of the wood.

SEED DISPERSAL IS FOR CHUMPS! 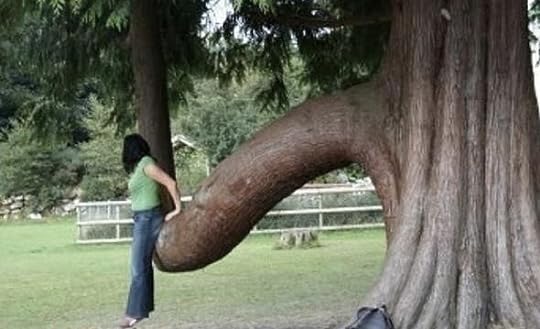 because, suddenly, he has a penis. but don’t worry – there’s no bark on his cock. because that would be weird, right, if there was bark on the tree’s cock? or if trees had cocks? 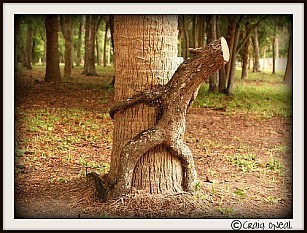 His fucking grew hard like the shaft of wood he was thrusting into her.

this is so true.

Hemlock twitched and spurted hot liquid against her inner walls. Lindsay could feel the odd cock pulsing in her, spraying more of his seed deep into her womb with each pulse.

science, please come back!! please!!! bring socrates and explain this to me! what is this liquid?? is this going to poison her to death?? i need to see a cross section of a GOD of WOOD so i can understand how this is happening.

mina shay is mum on the subject.

but, as always, she leaves it open (heh) for a sequel.

GOD of WOOD, you have pleased me. and taught me a valuable lesson.

i am going to take out my trash now.