Reamed by Ratatoskr by Brandi Burlington 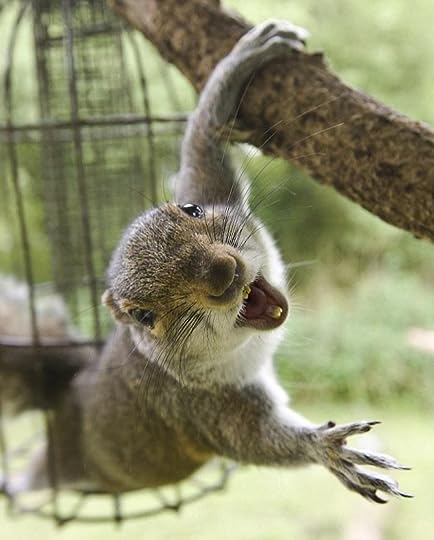 this one throws all pretense of sexxiness out the window, and focuses instead on the funny and sick elements and it is a triumph. seriously, it cracked me up big time. this is probably not for true monsterotica connoisseurs, but for those people who like the stuff eraserhead puts out, this is a must-read.

basically, it involves a rather obscure monster, the horned and “scurrilous messenger squirrel” ratatoskr of norse mythology. 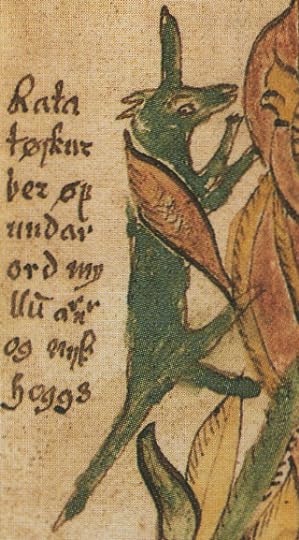 one might suspect that ms. burlington was just looking for a monster that began with the letter “r” to follow the word “reamed.” hmmmm….

it also involves two humans. two terrible everything-that-is-wrong-with-america humans. and they have just met, traveling through europe, where they have many scintillating conversations:

“…We aren’t in Sweden anymore, we’re in Norway. Can you drop the fucking accent already?”

“Norway’s not in Sweden?” Alice asked…

“What’s different about it?” Alice asked.

“I don’t fucking know, but it has its own ruler and shit.”

“That’s kind of dumb. It’s not like North Dakota and Chicago are different countries, they are like states.”

“Yeah, ” Chuck agreed. He didn’t get all these small European countries. Countries should be big like America. He was also pretty sure that Chicago was a city, but if it wasn’t he didn’t want to look stupid when he corrected her and then she used her smartphone to look that shit up on Wikipedia and prove him wrong.”

but they also have sex. lots of sex.

and along the way, they build a relationship based on love and caring and courtesy… no, wait, that was another book. these people are both kind of dicks. he’s just there for the sex; he finds her vapid and doesn’t even have the courtesy to think about her delicate flesh as he proposes they have intercourse upon a stone platform they discover under a giant tree.

“Just put your panties and shit on it and we’ll fuck on them,” Chuck gallantly suggested.

but alice isn’t all that better herself. she, also, is just there for the sex, after having abandoned a previous trip-conquest when he proved himself unsuitable:

“It’s so beautiful. You are so beautiful. Sometimes, the world is too beautiful to bear,” he had whimpered as she had begun moving her mouth down the short length of his cock in an unimpressive attempt to deep throat the dweeb.

She had given up on him when she heard the first sobs and felt a tear drop onto her neck.

“Whatever,” she had said as she left his room in the hostel. Leaving him alone with his still hard cock in danger of being flooded from the deluge of tears.

alice is savvy enough to realize that chuck is an asshole, but as she reasons,

…she did like fucking and they were now fucking so what was a little hardness underneath her when she was getting all the hardness she wanted inside of her?

indeed. unfortunately, they have picked the wrong tree to fuck under: yggdrasill, the tree where the old gods hold their meetings, and the branches of which provide a home for ratatoskr himself.

and watching them, he begins to feel a stirring he hasn’t felt in thousands of years. and he’s gonna make his presence known.

from then on, it gets amazing. i don’t even want to ruin the joy of reader-discovery, but know that the squirrel’s got a horn, and he knows how to use it.

and you know how squirrels feel about nuts… 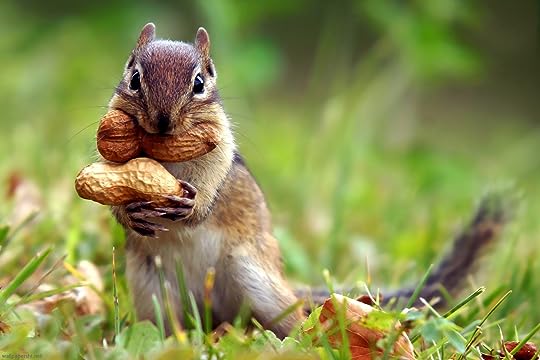 i will leave you with this:

Alice giggled. She thought Chuck was hilarious. He was always making jokes about people like retards, or AIDS patients, that made her feel like she might pee herself. Just the night before Chuck had done this impersonation of a gay retarded person that left her rolling around in the bed gasping for air. “That’s so funny, you’re like almost as funny as Dane Cook,” she said. Chuck had then offered to do an impersonation of Dane Cook and did the exact same impersonation. She didn’t find that impersonation very funny. She thought Dane Cook was the funniest man alive. Funnier than Chuck and sexier, too.

also included is an all-too-brief excerpt from brandi’s next book:

rimjob monster under the bed

i can hardly wait!!!