Marcel the Shell: the Most Surprised I’ve Ever Been by Jenny Slate, Dean Fleischer-Camp
My rating: 5/5 cats

my review for this book will be a kind of open letter to the people on my thread for The Book with No Pictures who were critical of my underwhelmed reaction to it and scolded me that since i don’t spend time with kids, my opinions are “basically useless.” i was very clear in my review that i was an adult reader with no child-contact, and that my response to the book was one of someone who was nowhere near its target audience. i didn’t need to share my personal backstory, but i chose to, thinking it would be helpful for readers of the review to know, so they could feel free to dismiss my opinion on those grounds. quietly. to themselves. but b.j. novak is someone whose successful day job is going to attract a lot of readers to the book who are not the intended audience, and i read it when it crossed my desk out of curiosity, and that was my honest response.

Then why are you reviewing children’s books? Childrens books are not written for adults to love, but for children to love.

because some books intended for children can still be appreciated by adults, duh. Sometimes I Like to Curl Up in a Ball, Sparky!, Hedgehog in the Fog are all books for kids that i have loved. and now there’s this one. that i love. and like b.j. novak, jenny slate is someone whose acting and comedy career is going to attract even childless readers who are interested in what kind of book she might produce. so to you poo-pooers—POO ON YOU because i LOVED this book. and here’s the kicker—i’m not really a fan of what little i have seen of jenny slate’s acting. a few snl episodes, bob’s burgers (which i do love) and parks and rec, where she plays one half of the most annoying duo in the everlovin’ world:

and obviously that character is meant to be annoying, so it’s a success in terms of her ability to BE incredibly annoying, but it doesn’t prevent me from prolonged cringing every single time they are onscreen.

but then connor showed me a video, and i completely fell in love with this little lopsided shell-creature.

there are some scattered others, but it gives you a good sense of what this shell is all about. marcel is such an endearing little guy, and her voice is just perfect—soft and gentle, a little vulnerable, and you just wanna pick him up and give him a gentle hug. or i do, anyway.

and this book is different from the first marcel book, from what i can tell from the reviews. this is an all-new story, not just a static version of the videos.

and it’s so weird. in a good way. it’s a tiny little story about the most surprised marcel has ever been, but like the videos, it’s not a linear narrative – it is told in that little kid way of telling a story, with digressions and off-kilter details that aren’t important to the actual story, but veer off into the fascinating territory of what pops into marcel’s head as he is telling the tale. it’s a surreal little journey, with words and paintings.

this is my favorite page of the book 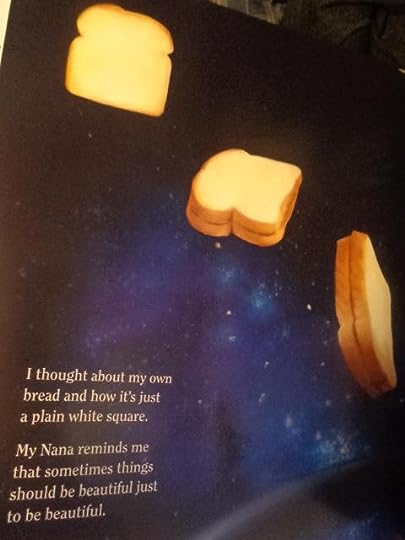 and people of ANY age can enjoy it, which is what characterizes a successful children’s book in my eyes. because it’s not the kids who are shelling out the money for these books. it has to appeal to an adult on some level in order to get into the hands of a child, and this one stands out from the pack and it made this barren old wench smile. so there.