Like a Woman by Debra Busman
My rating: 4/5 cats

“Child, just handle it. Whatever it is. Handle your business. Handle your fear. Because whatever you can’t handle is just going to come back round and handle you.”

this book surprised me. i wasn’t expecting it to be as good as it is, since it is a) compared to Bastard Out of Carolina, which i was not a fan of, and b) because feels so familiar: young girls coming of age on the streets of los angeles, fleeing unhappy homes only to get sucked into the dead-end cycle of sex work, violence, poverty, drug use, and despair.

but her writing impressed the hell out of me, and while there were shaky parts at the end, the strength of the much more frequent excellent parts made this a solid four star read for me.

from the first paragraph, it’s clear that we are already in disturbing territory:

The first job Taylor ever had was pulling down her pants and peeing in front of the old man who lived in the wash behind the Hollywood Freeway. It was easy money. Steady work. Flexible hours. He never touched her, never frightened her. Just gave her dimes for every puddle she made. She was seven.

and that sets the tone for the book – discomfort mixed with humor. shock value schtick doesn’t usually work for me. i read at an emotional remove, so i’m generally unflappable. attempts to horrify reader-me with scenes of abuse and violence bounce right off of me, and i generally feel a little embarrassed for the writer; a little scornful. it’s easy to get an emotional response for normal, non-robot readers: put a child in a terrible situation, sit back and await the gasps. and that’s really easy to do, so i consider that kind of emotional manipulation to be lazy. HOWEVER. there is a scene early on in this book that penetrated my sensors and gears and made even ME gasp. it involves david, and that’s all i will say about that.

taylor leaves her drunken, abusive mother’s house when she is fifteen. at first, she survives by dealing pot, but she soon finds herself turning tricks on the street. taylor is already a tough kid after a lifetime enduring her mother’s fists and a childhood running wild with a bunch of young hooligan boys, but here, among the other teenage prostitutes, she finds a sisterhood of girls who have been beaten, molested, humiliated and are calcifying into a fierce, unapologetic womanhood. the narrative shifts in between taylor’s story alongside stories of the other girls, most frequently taylor’s new girlfriend jackson, who get together after jackson intervenes, with her trusty knife, when taylor is being assaulted by a john, and when taylor later returns the favor:

When in doubt, steal. I laugh to myself. That white girl loves to steal. Everywhere she goes, everything she does, she’s gotta take something with her. Me, I prefer to leave my mark, leave something behind for them to remember me by. My mama says when I was little she’d have to whip me for always writing in other people’s books. “But Mama,” I’d tell her, “I’ve got something to say, too.” And I know that trick is going to remember my mark on his behind a lot longer than he will the few hundred dollars the white girl stole from him. I like to leave my mark. That’s why I write. The white girl, she’s just trying to get back something that was taken from her a long time ago. My mama says the white girl’s a fool, says you can’t ever get back what’s been taken. You just gotta go on and make your way in the world.

for a while, things are as good as they can be for two vulnerable girls living in abandoned cars in a junkyard. their love is based on shared painful experiences, and they believe they are just passing time until their dreams are going to take root and flourish. the life is hard, and their friends continue to fall prey to the brutal life of the street, but their solidarity strengthens them.

there’s a sort of freedom to be found in their self-destructiveness and pain because at least this time, there is “self” involved. they are defiant in the way they handle the consequences of their lifestyle, and the tone of it reminded me of this one scene from one of my faaaaavorite movies, head-on, where sibel kekilli is assaulted in an alley and keeps rising up laughing, with this “fuck you, what else you got?” look in her eyes that is both pitiful and majestic. 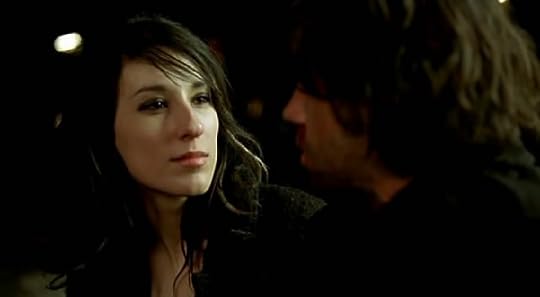 i could not find an image of it on the internet, but you should watch that movie.

the book does a great job addressing both the overt and the subtle humiliations girls are subjected to:

and, if it’s not too much menses-fixation on my part, there’s also great depiction of the faux-tough posturing of teenage girls

“Guess I just don’t see what the big fuckin’ deal is anyway. All this talk about periods, cramps and shit. You ask me, it all ain’t nothin’ more than just another goddamn way to bleed in this world.”

busman has a knack of weaving the episodic threads into little chunks. this isn’t linear or cohesive, but it shouldn’t be, not with the subject matter. i remember greg saying that what really pissed him off about Go Ask Alice, and how he could never understand why people believed it was a genuine diary and not just a marketing ploy is that she became much more articulate as she fell deeper and deeper into her addiction. and while this isn’t first person, or written as a journal, i think it does a good job capturing the pattern of the girls’ lives – it’s frozen incidents, memory-flashes, choppy fragments of the stories of the girls no one acknowledges clamoring to be heard. stories of racism, sexual abuse, identity, and discrimination, the impermanence of love, the casual way girls are made to feel inconsequential, and the sometimes horrifying ways they fight against that dismissal.

i kind of lost interest in the View Spoiler »post-jackson « Hide Spoiler storyline. the flashbacks remained strong, but the main story was less interesting – taylor is here doing this and now she is there doing that, and the way-too-long closing sequence/extended metaphor was a real letdown after so much solid writing before it. i was very disappointed with all that ocean-stuff.

but the bulk of it was terrific. busman has a really strong voice, and i will be looking forward to her next book with grabby-hands.