Death Comes in Her by Faith Frost 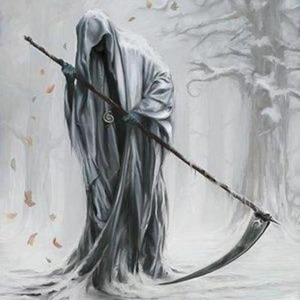 so, what’s it like to receive la petite mort from, well… mort lui-même??

see, amy saw her man all over some other girl at a club. so she punched him in the face. and then got really drunk. but not drunk enough where she was feeling no pain. in her hand – she is so over her boyfriend, man. so she took some painkillers, but they did not go so well with all the alcohol in her system, and death came calling…

but amy is in no mood to go gentle into that good night.

and she figured, if death would come for the archbishop, maybe he would also come for me!!

but death’s biological clock is ticking,see, and he’s not just looking for a tumble in the sack. he wants a baby-mommy.

and he is very specific.

“What will I be expected to do?”

“I will breed you and impregnate you tonight. You will carry my child. I will return in nine months to have sex with you again to stimulate your uterus into the birthing process. I will deliver my son from your body and take him with me,” he stated very business-like.

it is, but it’s not going to be all fun. death has a funhouse body, full of surprises.

“What was that sharp thing on your tongue? The thing that slammed inside me?”

Death smiled, or at least Amy thought he smiled in the darkness.

“I told you that I am not human,” Death stated as he took a fingernail and circled one of her nipples. “I have barbs.”

“You have barbs…like a cat?” she asked curiously.

“I told you this would not be an easy fuck. I am not human. I am pain. I am death. I am that of which nightmares are made. I am trying, for your sake, to be gentle.”

death is like that goth guy we all dated in high school. you just gotta roll your eyes, tell him he writes really good poetry and deal with it.”yes, baby, you are that of which nightmares are made…”

but amy’s goth guy is the real deal, and can get a little snappish, a little abrupt.

“So, at will, you can let thorns release from your body?”

“You can control this?”

“Most of the time, unless… I am in the throes of climaxing. It could also happen when my emotions run high. That’s enough talk!”

and he requires bizarre pillow-talk. at his prompting:

whatever, death, whatever…you’re a big scary monster, i get it…

but despite all his tough-guy posturing, death can be a little clingy:

“I am going to put a magic ring through your nipple. It will help me track you down in case I can’t find you.”

because that is the only possible response.

“I can’t let you disappear on me with my baby in your belly. The nipple ring will let me keep track of you at all times.”

you would think death wouldn’t need jewelry to find his woman. and BTW, this is not what beyoncé was talking about.

“YOU FUCK ANYONE, AND THEY ARE DEAD!”

“You can’t mean that.” Amy was squirming under his big body, so he put more pressure on her arms to hold her still. He wanted his message to be absolutely clear.

sigh – death is such a control freak. it’s a real drag.

but it’s kinda cute, ‘cuz you know he’s just gettin’ all mad because he likes her.

“I am going to swell your belly with my baby. I am going to come in you so fucking hard you will feel my seed hit your womb! If you fuck anybody else while you are pregnant, I will kill them. Do you understand?”

“This wasn’t part of the deal!” Amy was crying now.

“I AM CHANGING THE FUCKING DEAL!”

and this might be my favorite line in the story:

“No, we didn’t agree to that, and I am not even pregnant yet!”

“You are going to be within the next ten minutes.”

and if there is a sequel (fingers crossed) i will tell you what pregnant-sex-with-death is like.

it will probably be confusing. mind the barbs, that’s your son!!!