Beer Run of the Dead by D.F. Noble, Arthur Graham
My rating: 3/5 cats

a tally of the last few books i have reviewed:

and now this book about the zombie apocalypse, cussin’, and a lot of beer.

sometimes i just want to float all seven of my proust reviews and say “LOOK! sometimes i read long and important books!!”

and sometimes i read books that arthur graham sends me.

and a little d&d nerd will lead them.

if you are the kind of person who enjoys a good bizarro-type romp in which obnoxious dudes do obscene things while spouting offensive mantras—climb aboard!! because there is a lot of funny-ass shit in here. and some deeply disturbing imagery, including a zombie birth, fecal alley, and well, this:

Following the sound to the room next door, he’s shocked enough to catch the guys with a zombie in there, let alone one strapped to table with a funnel in its mouth. Steady squats over it, his ass hanging out of his jeans.

“What the fuck are you guys doing?”

Giggling even louder now, Rock half turns his head, never taking his eyes off the zombie’s face.

“We’re farting in his mouth,” Steady clarifies, chuckling as he builds up pressure. “He fucking hates it!”

Suddenly he lets one rip, hard enough to pop an eye out of zombie’s head.

Rock and Steady both fall over, holding their stomachs and laughing hysterically. Kip closes the door and heads up to the roof, sitting down at the table with his journal.

which i will say is the first time i have ever encountered this in a zombie book, so kudos for that!

it’s definitely a big slobbery fun romp of a book. these are the antiheroes of all antiheroes, and you’ll never applaud them, but for all their poor social skills and lack of perspective, they do sort of save the world. and as the synopsis promises:

Not everyone who saves the world is a rocket scientist, a super hero, or a handsome actor turned politician. Sometimes people who save the world… they’re fucking idiots.

fortunately, they do have one redeeming quality. when they meet up with an african american fellow hiding out in a beer cooler that they desperately want to get into:

“Hey!” Steady shouts back, pretty drunk by this point. “You let us in right NOW, you, you…” He struggles for the words, but somehow they fail.

“Come on and say it, you fucking pussy! Call me a nigga! Go ahead!”

which of course i only excerpted here so i could use this picture, one of my favorite things from the much-missed chappelle show: 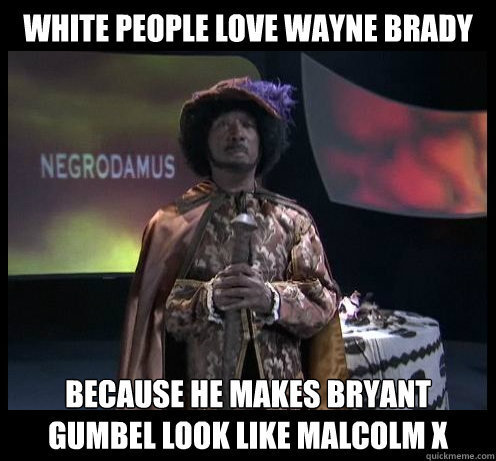 so, read it if you think this is your thing. or read proust. just read something