although i bought this book long before true detective existed, i never got around to reading it because i am the worst at reading. thank goodness for andrea, who gave me the kick in the pants when i actually had a tiny little gap of time to read books of my choosing, because this is both right in my wheelhouse and also a nice departure from many similar stories in that noir/grit lit genre.

there are similarities between this book and true detective – it’s a story told in both the “now” and the “then,” with teenaged prostitutes and a million cigarettes, moral ambiguity and fatalism, new orleans and plenty of drinking, drugs, and death centered on a good man with bad habits. also, beer cans as art. 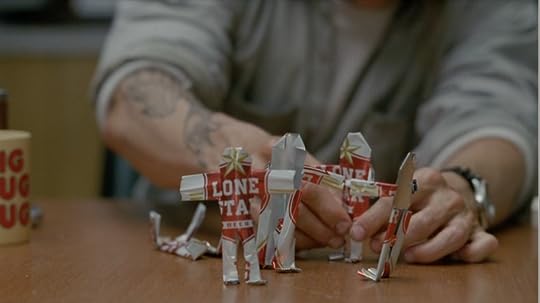 but it’s much more grounded than true detective. the metaphysical doesn’t really enter into this story, except in the most oblique way, and might only be clocked by someone looking for it with true detective goggles. there’s some ruminating on death and the like, but not nearly to the extent that rust cohle rambles about in those lincoln ads.

roy cady is a man living on borrowed time, after a medical diagnosis leaves him with little hope for any kind of future. on top of that, he barely escapes with his shortened life after a set-up disguised as a routine (for him) job goes bad, and he has to kill his way out of it. the reason for the set-up is, naturally, a woman, but after the dust has settled, roy finds himself responsible for a different woman – a young prostitute named rocky, whom he will rescue and befriend. with rocky and her five-year-old sister View Spoiler »we’ll call her a sister for now « Hide Spoiler tiffany, they set out on a road trip to galveston, texas with some incriminating documents and a whole lot of folks pissed off in their wake.

roy cady is very much an antihero, with his criminal associations and his less-than-noble but understandable ogling of young rocky. he’s very gentlemanly about it on the outside but there is a LOT of time spent admiring her butt and legs in some sort of icky blason. but he’s oddly sensitive, haunted by the memories of a love long-gone, and in one of the most emotionally uncomfortable scenes on the book, he meets up with her again and we all squirm for him and his misguided overtures. he’s also not just a common thug. although his terminal diagnosis paves the way for some nihilism, he isn’t reckless, and he doesn’t go out on a revenge-fueled killing spree, which would be the norm for this kind of book. here, it’s actually kind of the opposite.

I felt the cold metal of the gun in my hand and the idea of using it seemed suddenly impossible, the thought paralyzing. My body was sort of transfixed by this panic.

I had no idea I’d become so meek.

I just didn’t want anybody to hurt me again.

So at some point I’d become a coward. Or I’d always been one, and only just realized it, and now, like everything else about me, my insides were on the surface, plain as day.

it’s a great book in terms of structure and pacing, and in the slow but certain closing of that damn flat circle of time as we learn what happened in the “then” to turn the tough roy into the broken roy of the “now.” it’s also a strong character study of a man that diverges from genre-conventions to give the reader some genuinely surprising twists and scenes with unexpected emotional impact. oh, also a shit-ton of violence. seriously, wow.

View Spoiler »fucking rocky, man. the prose in the scene where he finds her body is so fucking flat and unemotional, which made it even more powerful, as though we were in the same state of broken-down shock as roy. fucking masterful. and deserving of THREE f-bombs. « Hide Spoiler

apropos of absolutely nothing, reading this made me remember reading something roger ebert wrote about the characteristics of noir that really stuck with me, because it was both accurate and uncharacteristically poetic. two of his notes were that noir involves

Relationships in which love is only the final flop card in the poker game of death.

and that it was

The most American film genre, because no society could have created a world so filled with doom, fate, fear and betrayal, unless it were essentially naive and optimistic.

chew on that, pals!