seemed like the right time to break this book out.

so far, during quarantine, i have made:

this is from the first chapter: Mild Irritation, which is a bad-day-town we passed ages ago, but it looked tasty, so i gave it a whirl. the only cornflakes i had here were chocolate ones, but i think these turned out perfectly, with a nice little cinnamon kick to ’em. 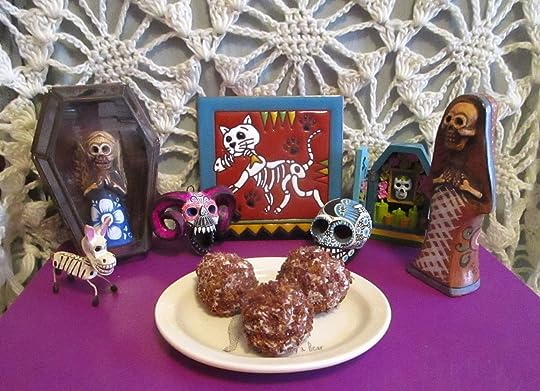 you’re supposed to turn these into little sundaes with whipped cream and chocolate sauce and stuff, which i will do later. for now, just these little balls, unadorned. 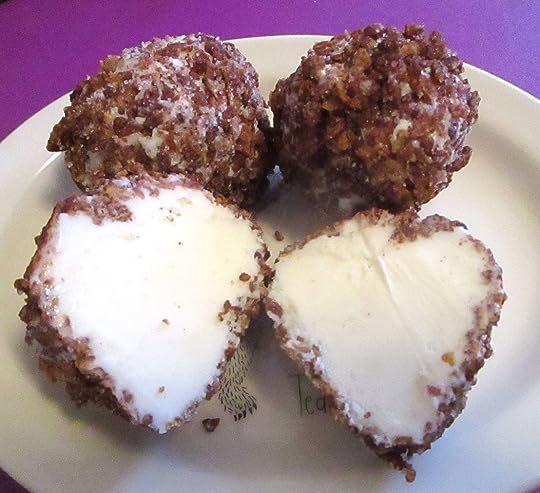 while i am aware that not only have i not made mexican fried ice cream, i haven’t technically made fried ice cream at all, sometimes you’re quarantined in your place and you look around and realize you are surrounded by day of the dead tchotchkes, so you may as well grab a handful and toss ’em into a photo.

this is “a carefully crafted thematic dessert” which helps you bounce back from being dumped by dumping “whatever your heart desires” into some pre-existing ice cream. sounds good to me! i made my own quarantine version of cold stone creamery with the following mix-ins: 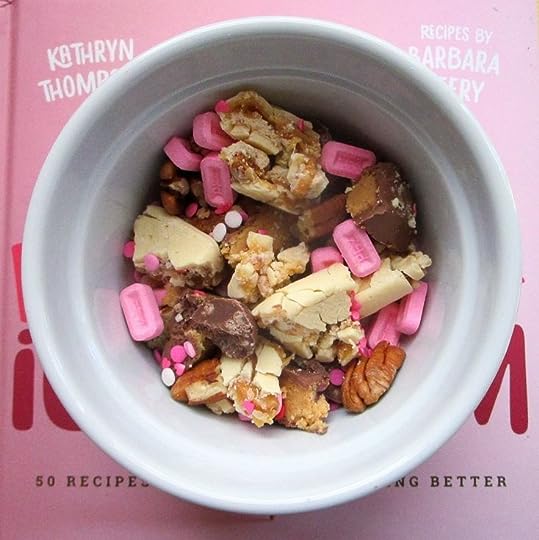 and this is what it made: 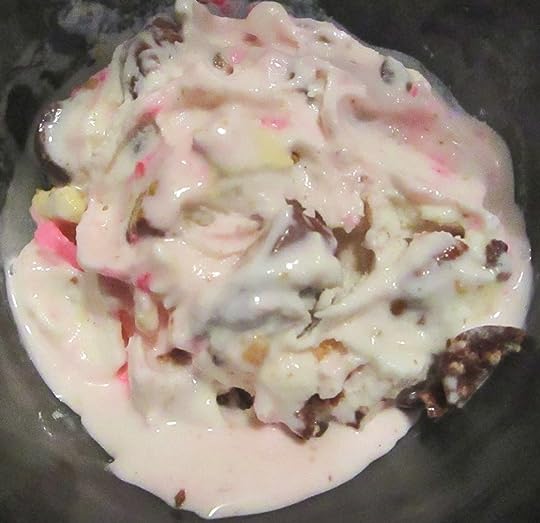 now, you may say to yourself, “that looks like vomit!” and you would be correct, but no one ever got dumped for being too pretty.

meanwhile, this is the example pictured in the book: 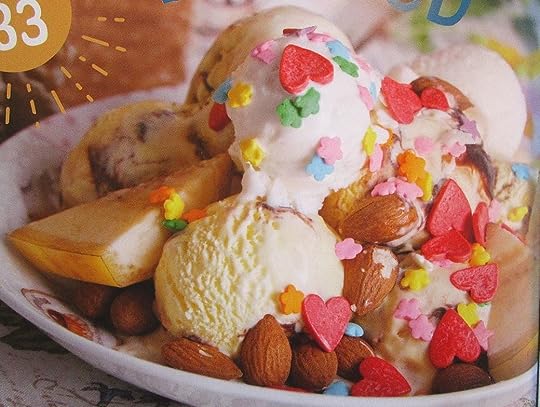 first of all, while it doesn’t look like vomit, it also doesn’t look like following directions, as those add-ins have not been incorporated into softened ice cream, but just tossed all over it. second, their combination of whole almonds, sugar toppers, and what is that—a yellow apple? a QUINCE? that flavor profile is why you’re single.

awww, cat got your heart? 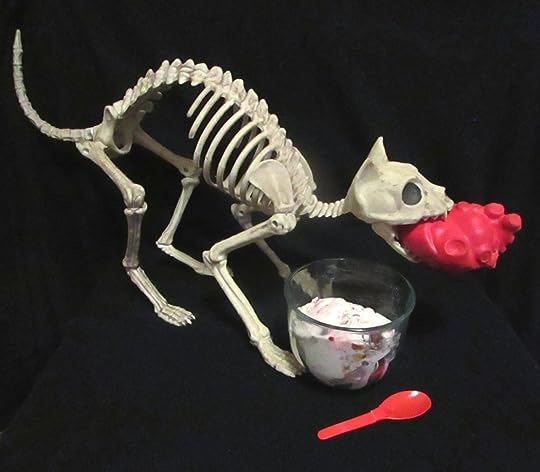 both this recipe and the previous one are from chapter three: Worst Day Ever, or what i like to call “Now.”

first, you need to make a batch of HOMEMADE MAGIC SHELL 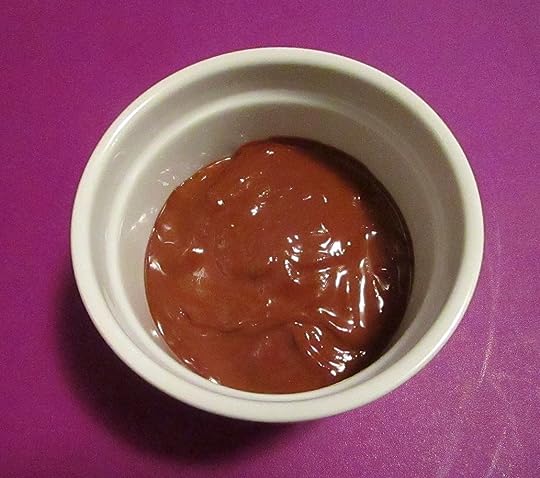 which doesn’t work quite as magically as store bought, but whatever—you’re putting it in the freezer anyway.

here are my balls, chocolate and vanilla: 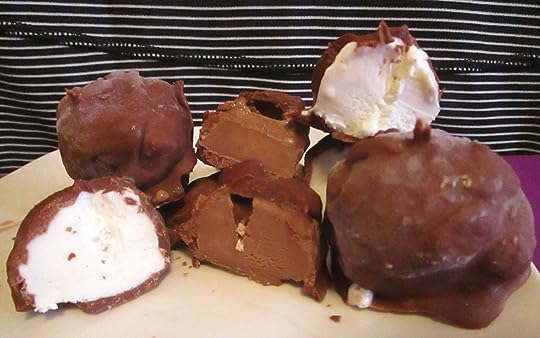 recipe said to put homemade magic shell in a squirt bottle to coat the balls, but i’m not a community pool snack bar, so i froze these with a toothpick in ’em and dipped them into the magic. and YES that is part of a toothpick in the center-square ball. pobody’s nerfect. 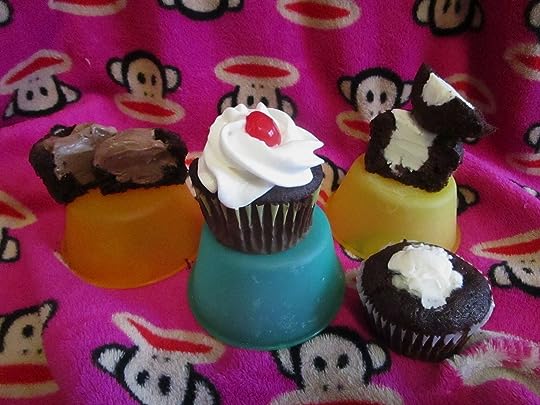 i made some chocolate cupcakes, stuffed ’em full of chocolate OR vanilla ice cream and mainlined them while binge-rewatching the good wife. pro tip: if you make ’em small enough, you can stuff a whole cupcake in your mouth and the cupcake borders will prevent sensitive teeth from spangling in ice-cream pain.

INTERLUDE: here are two toppings i made that will go into the next recipe: 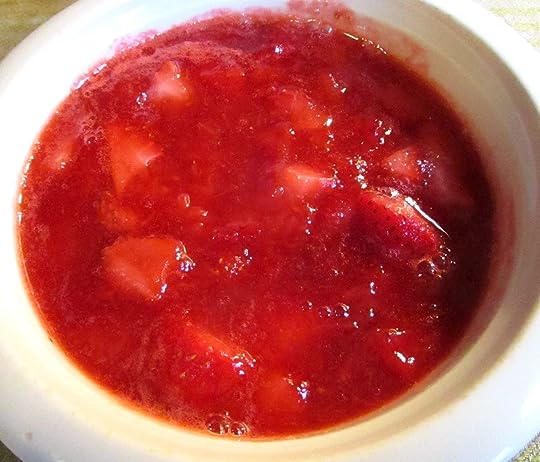 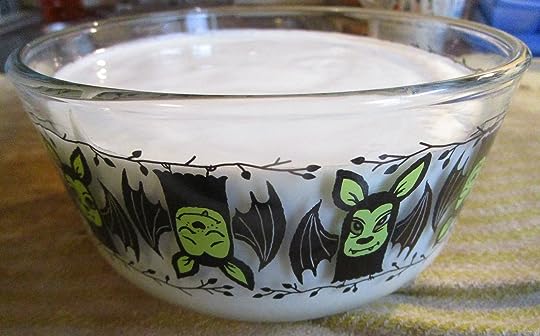 i ate so much of this on its own, with a spoon. okay, a gravy ladle. i managed to save enough for the recipe, but it required all of my self-control to stop pouring molten marshmallow down my gullet. 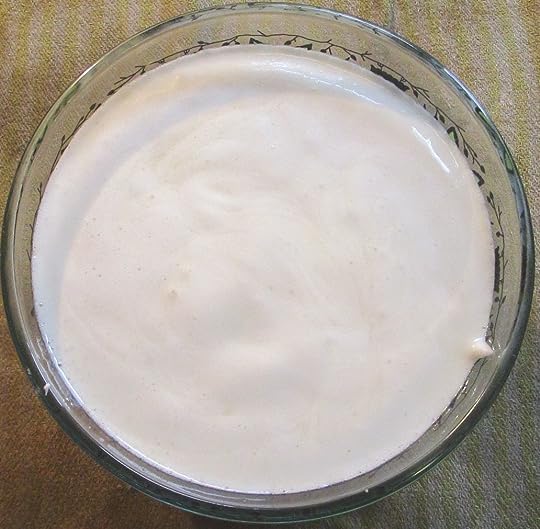 okay, so to make this, you will need to make these sauces: 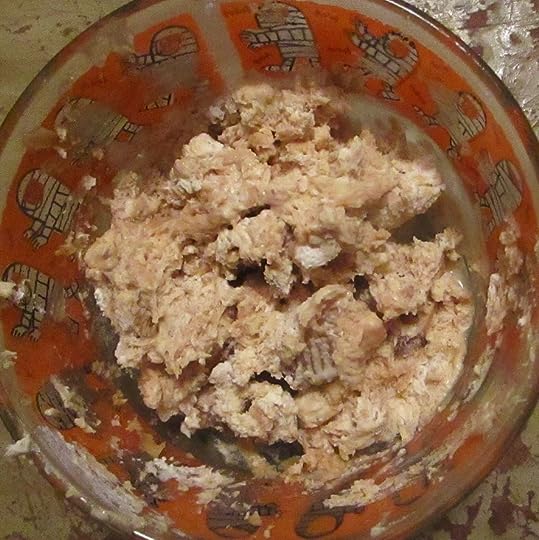 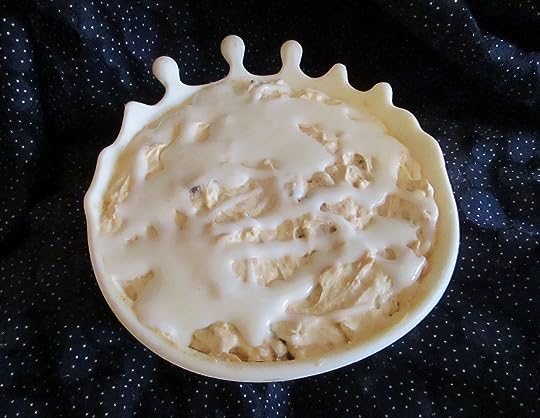 and now you have invented ice cream! 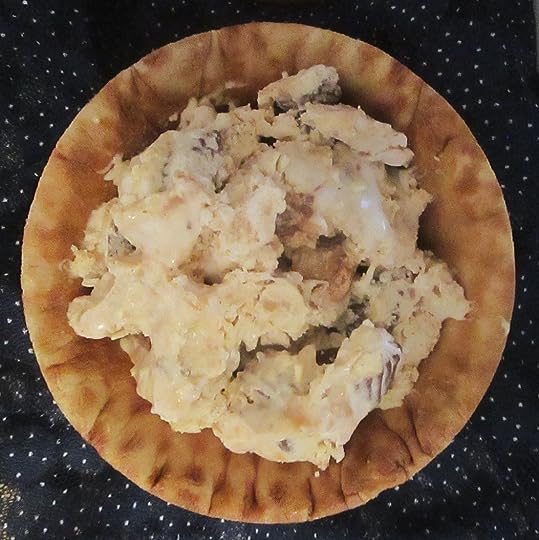 and then you plop that strawberry sauce on it and dive in to this peanut butter marshmallow strawberry concoction that you don’t have to share with anyone else because you are RESPONSIBLY PRACTICING SOCIAL DISTANCING. 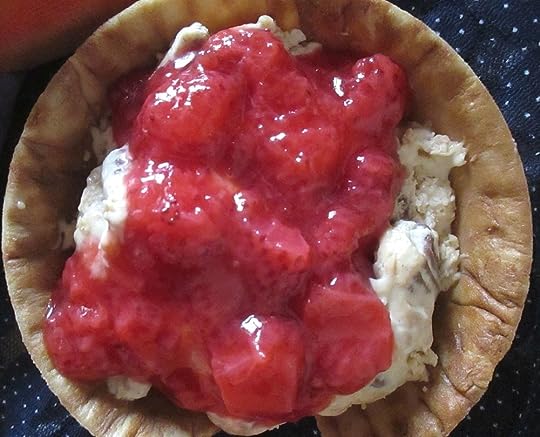 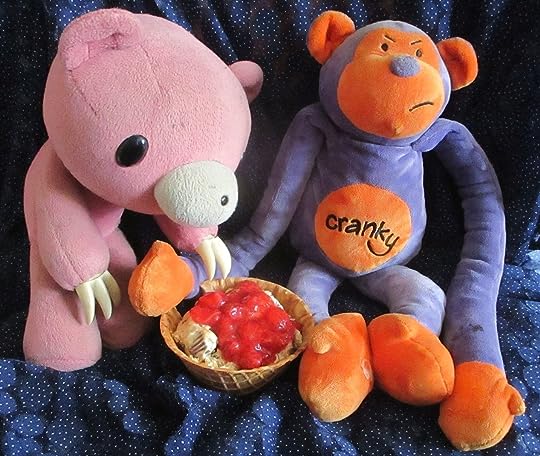 i love this so much. i may never eat anything else.

holding steady in the WORST DAY EVER chapter with these nondairy frozen banana treats. i made four different varieties because who’s got the attention span these days to finish any one thing? and if these ooze back into room-temperature banana mash before you manage to finish ’em, it’s no trouble to pop them back into the freezer or the fridge or cruise by an hour later to have another spoonful before drifting off to pick up and put back down four different books and pull out more of your hair. 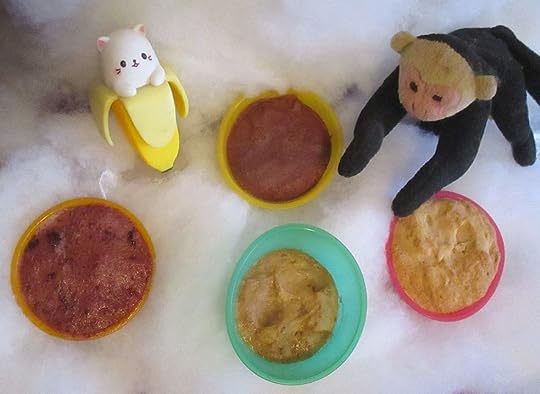 not my most triumphant staging, but not bad for a ghost. 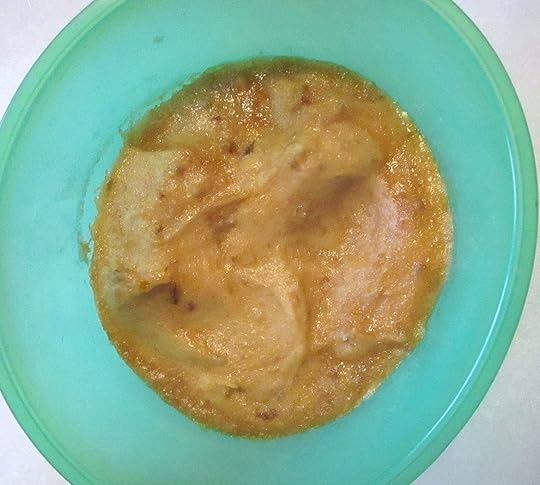 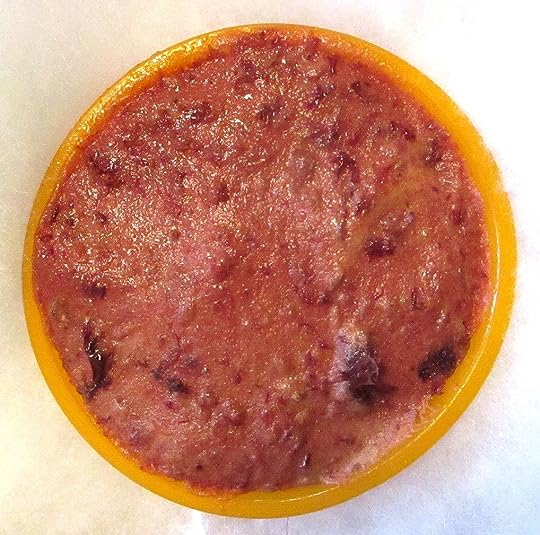 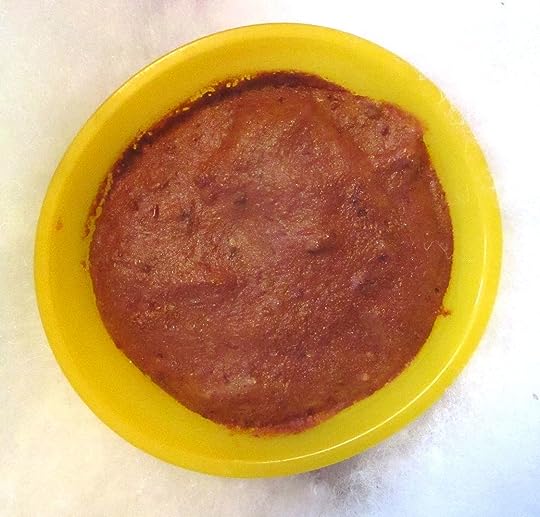 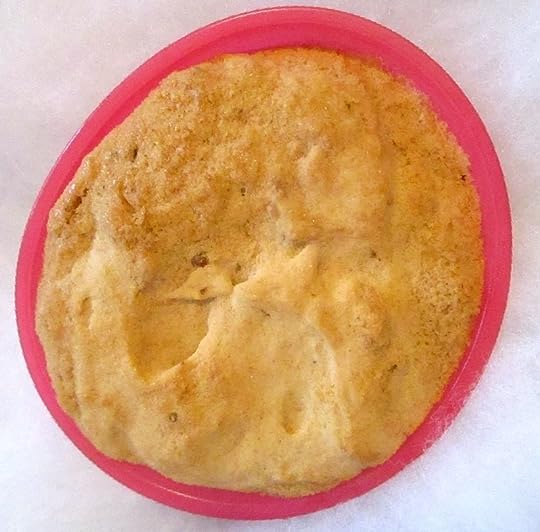 and that’s how to fake ice cream. 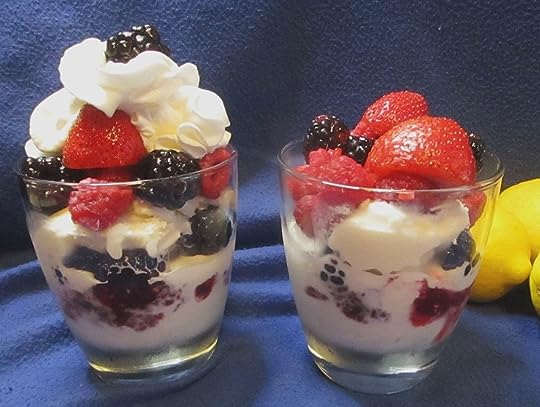 this is a simple layering-dessert of vanilla ice cream, sorbet, and fresh fruit. i decided to use lemon sorbet, because i like the way lemon tastes with strawberries, raspberries, and blackberries, and i thought it would look pretty, too, but OH NO! way to not use artificial colors, sorbet! so, in order to differentiate between the white-on-white layers, i added a layer of raspberry jam on top of the first layer of vanilla ice cream, and some blackberries on the sorbet-layer, and then watched it all melt into one big nonsense moosh but that’s okay because it was still delicious. 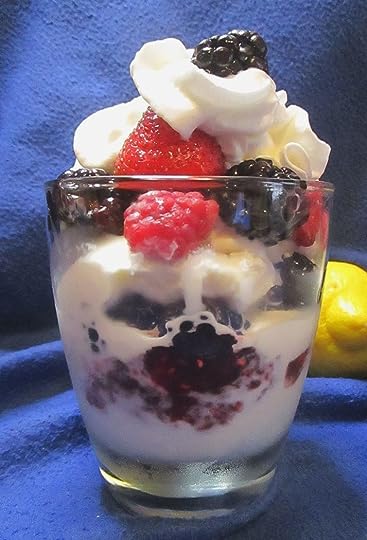 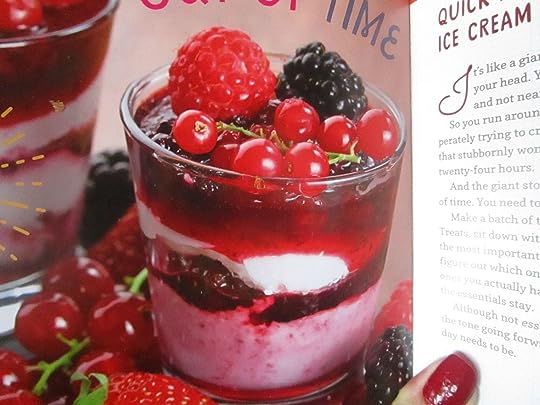 this has jam aplenty and all sorts of other things rounding it out. SO MANY TEXTURES ON BOARD! 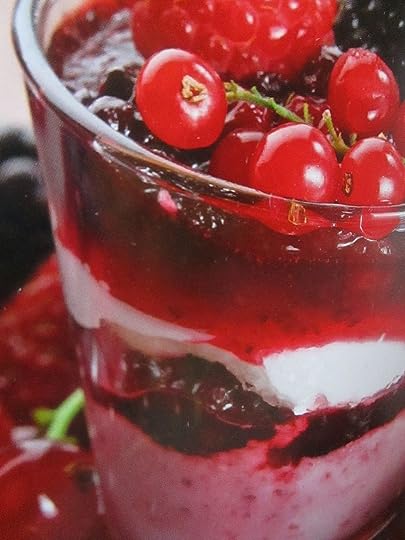 WHY YOU KEEP SECRETS, BOOK? and currants on ice cream?? this is like that quince situation all over again. food weirdos running this joint.