remember when Visitation Street came out and the world was abuzz with ivy pochoda fever?

it was during a particularly robust strain of brooklynophilia in the book biz, and my otherborough self was skeptical about the need for yet another paean to brooklyn, but it was such a phenomenal achievement, i ended up giving it a four star review on here.*

and then not a peep out of her for four years.

but if it takes four years to produce something this good, i’m willing to be patient.

since Visitation Street, pochoda switched coasts and now lives in L.A., and this book does for the skid row section of L.A. exactly what Visitation Street did for red hook – it’s a close look at a community; its inhabitants, its flavor, its practices and values, the unwritten laws operating within but also distinct from the larger city in which they live.

but the novel’s branches stretch further outward and backwards, covering the lives of several characters whose fates will intersect (including one character from Visitation Street!!), and the choices and experiences that led them to this place, “now,” living on the streets on the outskirts of society.

and it’s just gorgeous, thoughtful, brilliant, sublime. even better than Visitation Street. the commune parts reminded me of Arcadia, the overall sprawl and character intensity and overlap of A Visit from the Goon Squad and the “close look at an underserved community” of The Wire.

i was thrilled to see that this was the book in my pagehabit box (although truth be told, i’d already gotten my hands on an arc, which i gave to greg. READ THIS, GREG!), because it’s so enriching to have her notes throughout** – it is like getting an inside look at what is already a very insider-feeling novel.

and truth be told 2 (truths in paradise), this arrived about the same time as my debilitating illness (koff koff), and when i was lolling in my bed all feverish, considering my reading options, i pushed this one back a couple of times, because i knew i would want to have my wits about me if i was going to read anything even remotely literary, and could only handle medium-grade YA and breezy adult thrillers. but i wanted to want to read it, so eventually i decided to see if i could handle reading something i’d actually have to think about, and i ended up devouring about 3/4 of it in one sitting (lolling), staying up until dawn fueled by nothing but canned peaches and the need to stay immersed in this world and her words.

it is easily one of my favorite reads of the year, and while i would wait another four years to read more from her, i really hope i don’t have to.

* i gave the book four stars – the review was probably a three. although the link to the ramones song might bring it up to a three-and-a-half.

** including this note that explains why she chose Book of Longing as one of the companion books in this month’s box:

I was lucky enough to have had dinner with Leonard Cohen while writing this book. He inspired me.

which does not make me jealous AT ALL. except for a lot, even though i had my own encounter with the much-missed troubadour. but still. we did not feast together. hhmph.

review to come, but DAMN.

my new pagehabit box has arrived!! 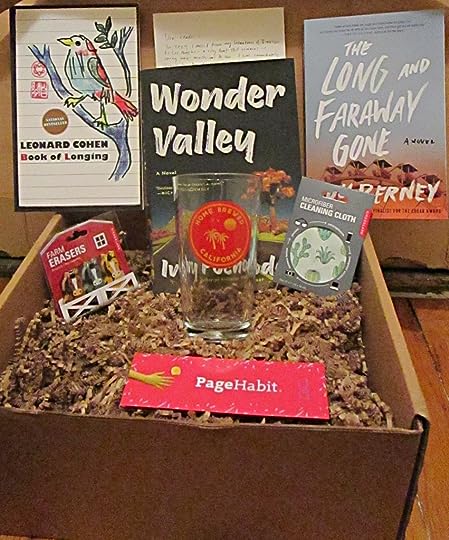 so many treasures! i am going to dive into this super-soon. there’s no explanation about why pochoda chose her book’s buddies, and i’m kind of hoping that the leonard cohen book has nothing to do with her own and is just there because this month marks the one-year anniversary of his death, and she’s mourning along with me.