The Story of the Easter Bunny by Katherine Tegen
My rating: 5/5 cats

2017: i found this book more alarming than expected, and soon i will write a review telling all.

so here we go – i am finally ready to reveal the true story of the easter bunny, which this book tries to pass off as sweet and folksy, but there’s something shady down in the subtext that i’m here to unpack and illuminate for you.

there will be both “spoilers,” in which i will discuss the contents of this 29-page picture book in great detail, and also spoilers in which i will ruin your childhood. for your own good.

it all begins with “a round old couple” and their pet rabbit. and this couple spends ALL YEAR preparing for easter. they are easter FANATICS. keep in mind that this is the easter bunny’s origin story, so at this point, presumably, easter as a greeting-card and egg-and-candy show is not a thing – the holiday is strictly an observance of christ’s resurrection. the book is not particularly religious – there’s a little thomas kinkade-village steeple poking over the snug little cottages in the background, and church bells toll, but jesus is what easter is all about under its candy shell, so if you approach this story as an alien visitor would, with no context beyond what’s on the page, it’s about two people who – for some reason -spend every waking moment of their lives dyeing eggs, weaving baskets, and making egg-shaped chocolates to distribute to the children of the village while they’re already celebrating a man’s return from the dead. are they a couple of jolly pagans? are they going insane? is this also the origin story of march madness? 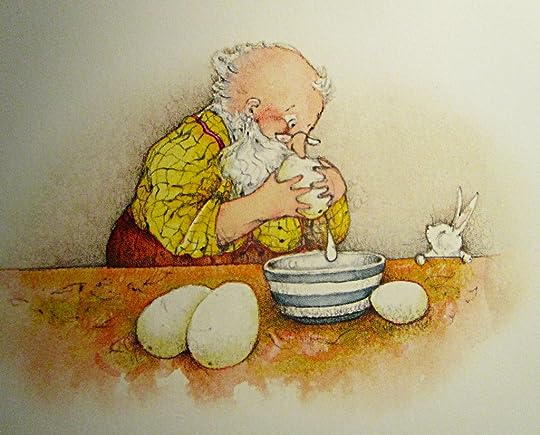 fun fact: basket weaving was a popular form of occupational therapy for mental health patients. fun fact 2: The Walking Dead airs on sunday nights and is also about people coming back from the dead.

so, the couple does their thing, sequestered all the cold winter long with their pet rabbit, who is always watching. always. watching. year after year, waaaaaatching. i don’t want to belabor the point, but when nearly every page mentions this rabbit watching their every move, it bears repeating in the analysis. 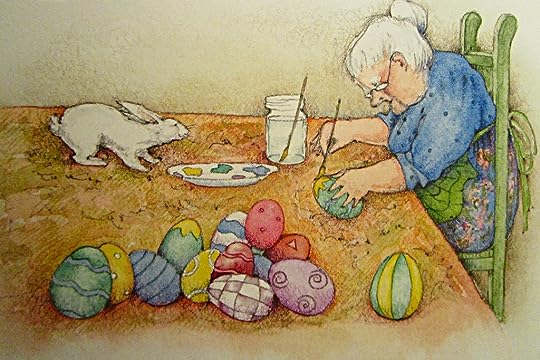 and every easter morning, the round old couple go out into their village and distribute the fruits of their labor. 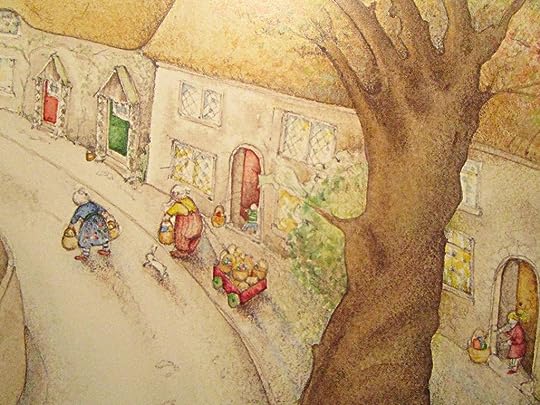 The round old couple brought every child
a straw basket filled with Easter eggs,
as they did every year.
And their little rabbit watched.

it’s a nice social event for them – gets them out of the house after spending all those months cooped up being scrutinized by a bunny rabbit, all dizzy on paint fumes and scorched chocolate. and it probably feels good to make children happy – a fitting reward for all their work. 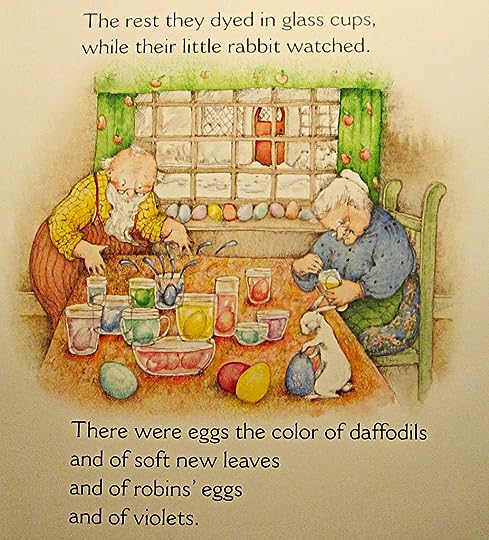 one year, after preparing most of the easter schwag, the couple sleeps in, and the ever-watchful, younger, more energetic, and apparently very calculating rabbit, gathers up the eggs the couple has colored and the chocolates they have made, molded, and wrapped, and puts everything in the baskets they have woven and then he goes off and delivers them all by himself without even attempting to wake the humans, thereby taking all the credit, while making a big show of delivering them “secretly.” which is about as disingenuous as santa pretending to be dismayed when he’s discovered by little boys and girls awakened after he lands a dozen stompy ungulates with festive bells all over them on the frickin’ roof.

The little rabbit scooped up the baskets
and hopped down the lane.
He left one for every child in the village.
He didn’t think anyone saw him.

rabbit, everyone sees you – you are making a spectacle of yourself!

by the following year, the rabbit has taken over this mom and pop operation entirely, overseeing most of the tasks himself, while upping production, and turning an eccentric couple’s gentle, albeit obsessive, hobby into a straight-up sweatshop.

look at these faces – are these the faces of carefree merrymakers or of bunny-whipped prisoners? 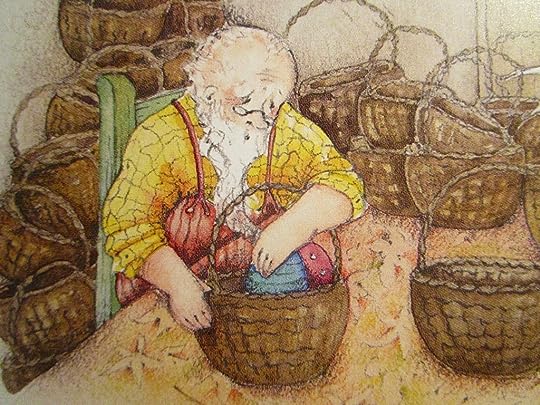 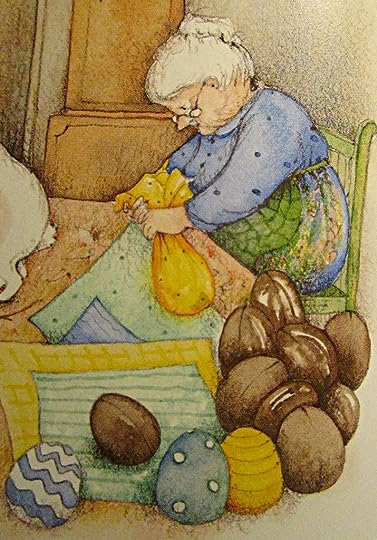 once again, he takes charge of the delivery, takes all the credit, and has evidently branded himself in a way the couple never had:

The little rabbit hopped all over the countryside.
And the children knew, The Easter Bunny came!

meanwhile, the couple is nowhere to be seen.

soon, the couple become too frail to even exploit anymore, and the rabbit just bounces, doing the old “see ya, suckers!” wave, blithely leaving two elderly people to fend for themselves after stealing their legacy. 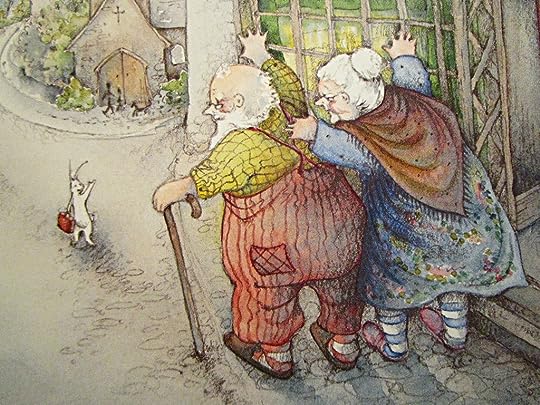 and he starts up a new sweatshop for rabbits 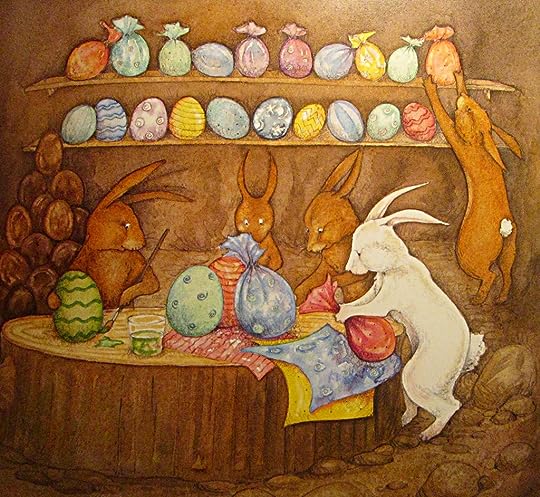 which is as misleadingly framed as his human workhouse was: The little rabbit’s friends came to help him. O RLY, rabbit? is it a coincidence that all your “helpful friends”are brown bunnies? hmmm?? 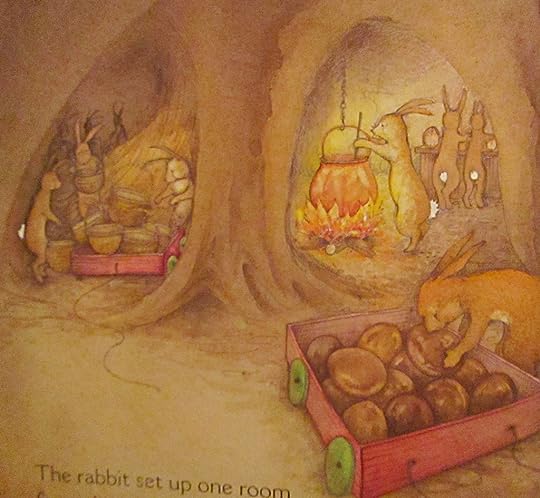 this is not a bunny i trust. his abandonment of the couple is poorly justified:

One year the round old couple could not help
the little rabbit anymore.
They were so very, very old.
And the rabbit knew he could not stay
in their snug little house anymore.
Too many children were discovering his secrets.

that last sentence seems tacked on, like a pencil-scrawled forgery on a rich man’s will. fact is, the rabbit left them because they were too old to help. he drained them dry like bunnicula drains a carrot, and tried to pass off his cutting them loose as, “noooo, too many children know about me!”

but that makes no sense. this is the story of how the easter bunny came to be, so isn’t he supposed to be known?

children aren’t supposed to catch him in the act of basket-distribution, sure, but historically, he’s always taken the credit for the candy and the crinkle-grass and even the marshmallow peeps that NO ONE should want to take credit for. so his betrayal of this sweet daft couple can’t be because the kids know he exists – i think the “secrets” referred to in that last line are about his elder abuse scandal; taking a sweet, addled couple hostage and running a labor mill that only profits himself.

whatever the reason, he leaves and the couple who loved and sheltered him all those years are never mentioned again, and probably do not live very long afterwards – neglect and complications from chocolate-egg-diabeetus. if they’re lucky, someone in the thomas kinkade village will find them come spring, if the predators have left enough of them to produce a noticeable odor.

still think the easter bunny is a hero, selflessly delivering jelly beans out of the goodness of his heart? consider this small, but important, detail: throughout the story, the couple’s baskets are referred to neutrally, as “the” baskets. but towards the end, there’s a shift, and “the little rabbit found the perfect place to make his baskets,” and “the Easter Bunny delivers his baskets.” emphases mine. he moved into a quaint village, exploited their customs, religion, their way of life, stripped them for parts and put his name all over their intellectual property, turning their small kind gestures into a commercial juggernaut. and no one made a peep. 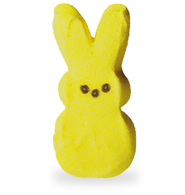 i found this book more alarming than expected, and soon i will write a review telling all. for now, i will eat candy and wish my daddy lived closer.