The Library at Mount Char by Scott Hawkins
My rating: 4/5 cats

i don’t read a lot of fantasy.
i read slipstream, magical realism, and horror, but fantasy typically just confuses me.

i think my obstacle is that with MR and slipstream, things are only just slightly tweaked, and what i relish is that unsettling feeling – that the possibility for fantastical occurrences is present, but there’s still something concrete and recognizable to ground me.

my imagination is typically not strong enough for pure fantasy.

but that cover?? and a library??
i was intrigued and ready to give it a shot.

and at first, i was not digging it. at all. for at least the first fifty pages i was all: holy shit what is happening is this part two of something what is going on?”

this book does not gentle you into its world. there are definitely elements that are “our-world;” character names like “michael,” “carolyn,” “david,” there is mention of a post office, and horses and club soda, but there are also things like Pelapi and people coming back from the dead, a man wearing a helmet of blood and a tutu and another communicating with animals.

initially it is unclear when this takes place, if this is our world or just a version of our world, if there has been some sort of global event that forced people to live …differently and have different associations and only vague memories of something called Reese’s Peanut Butter Cups.

but all will be revealed if you are a patient reader.

in fact, i already want to read it again to see how those earlier scenes read now that i know all that i know.

because the book takes some unexpected turns. so many, in fact, that i’m not really sure how to review it without treading into spoiler territory.

at its most basic level it’s a dark fantasy version of a bildungsroman in which orphaned children are schooled in esoteric and powerful arts by a man known as “father,” whose lessons are dangerous and frequently cruel. they grow up in the flexible time of his library and are raised according to the ancient rituals of the pelapi, which distances them from the americans they once were. they never break into song like the charming orphans in annie, 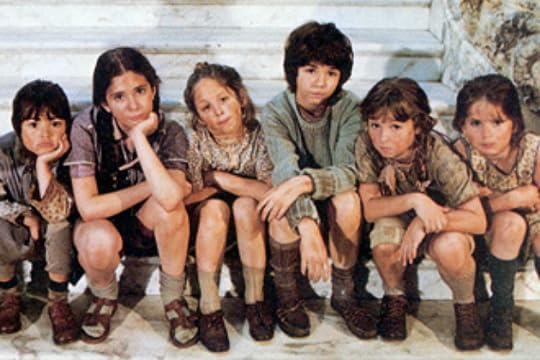 their particular lessons are harder, and turn them into harder people, prone to infighting, violence, and fear.

at the start of the book, father has gone missing, and without him in place the world, including our world, is in danger of his equally-powerful enemies making a power play. which would be very very bad.

unusual alliances are formed, there is a great deal of violence (for those of you with triggers – many animals are harmed. people, too – scores of them – but i know a lot of readers are more sensitive to animal deaths, so be warned), and the story is not at all concerned with who the reader may have become attached to – this is a harsh realm.

it’s a vengeance plot with a long fuse that demonstrates that power doesn’t just corrupt, it also dehumanizes.

i really enjoyed it, and i would be really interested to see what those of you with a deeper background in fantasy think of it.

but i do know that never has a tutu been more terrifying than it is here.

or has slapping a lion been funnier.