this addition to the burgeoning world of monsterotica is a) about a leprechaun, which is good because it is all new to me, and b) about a girl named karen.

it is as though the erotica world has heard about me and is tailoring itself to meet my needs. it knew i needed a leprechaun to add to my mental Q and A of “how do they do it??” so it called to me by name.

however, the leprechaun in this book would not care about my needs. he is pretty grabby, and “no means no” has not quite reached his little cave at the end of the rainbow.

he is not a pocket-sized leprechaun, of course, because what fun would that be? rather, he is the offspring of a human and a leprechaun, but he still gets all the leprechaun perks of living in a cave full of gold and the human perks of having a pretty impressive member.

and he uses that member on poor karen who resists mightily, but secretly, she likes it. i think she’s just got one eye on that pot of gold, you ask me. she probably thinks she will get some decent hush-money out of this. but i think that concept hasn’t reached his cave yet, either. damn leprechauns – get with the program!

is this one funny? well, after he force-feeds her his lucky charm,

“I’m guessin’ it don’t be tastin’ magically delicious to you, eh?”

and it is full of life-lessons:

To have a happy leprechaun fucking you hurt enough. To have a pissed off one, would be downright agony.

so… bad idea to piss it off, okay, karen? haven’t you pissed off enough people already? stop calling the leprechaun bad names. there is no place for vulgar language in the monsterotica world!

but i am so glad that the monsterotica world has taken my fascination with hygiene into consideration. after the leprechaun…changes gears? is that the polite euphemism??:

Shock! That’s all Karen could feel, was shock. Didn’t she read somewhere you shouldn’t “double dip”? Yeast infections, bladder infections, fecal matter going into her vagina and not to mention just plain gross.

yup. again – this is about a character named karen, it is not autobiographical, but it is eerie just how much of this seems designed to find my little eyes.i am thrilled that this was brought to my attention. thrilled, i tell you! 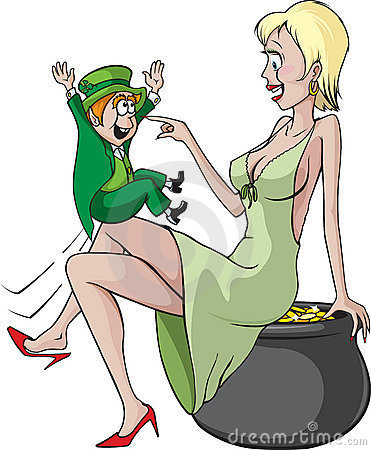 and is there room for a sequel?? boy is there ever! this author has tons more leprechaun shenanigans to share! stay tuned!