The Forbidden Apple: Sex in the Schools by Victor J. Ross

along with the people responsible for 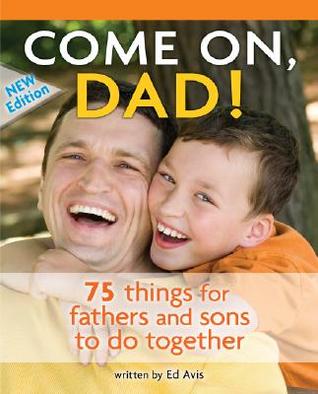 Come On, Dad!: 75 Things for Fathers and Sons to Do Together 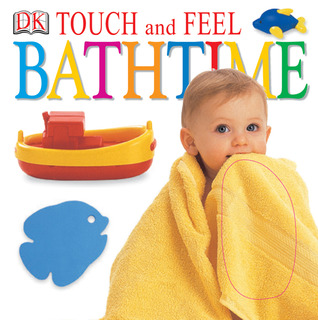 the parties responsible for this cover design really need to be rounded up and given a lecture about the difference between “appropriate and effective” and “flat out batshit,” and only in part for their use of four different fonts. 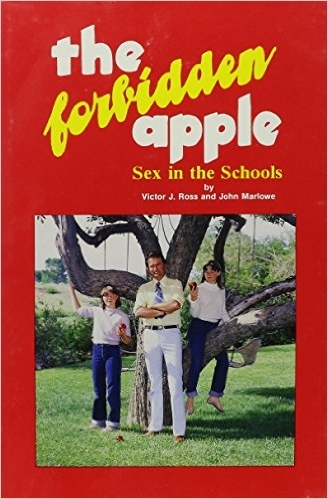 even way back in 1985 when everyone was all coked up and preoccupied with hair mousse and synthpop, someone had to realize this photo was a bad idea. not seeing the creep under the cliff huxtable sweater is one thing – we were all caught off guard there, but this looks like a cult leader surrounded by little girls holding their temptation-laced apples out for teacher like they’re the responsible parties in the “hot for teacher” scenarios. and is that fallen apple on the ground because the teacher threw it down in a defiant “i will NOT touch, you, girls!! no matter how you beg me!” tantrum?

i’m not suggesting there’s ever anything funny about sex crimes in the schoolroom, but there’s a lot about this book in particular that is bringing out the horrified laughter in me, from the misstep with the cover, to the provocative table of contents: 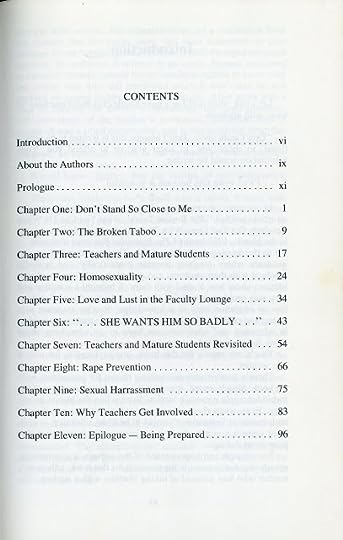 what’s with the all-caps, chapter six??

now, i haven’t read this book (although if the angels want to give it to me, i gladly will), so i don’t know how the topics are actually handled, but i am very apprehensive about a book that discusses homosexuality in the same breath as child molestation and harassment in a book barely a hundred pages long.

the national library of america lists the subjects as:

an amazon review and adds staff romances to the mix.

so, in fewer pages than The Stranger, this book covers all possible shades of sexual misconduct that can plague a high school. and also homosexuality.

this site has scans of some of the pages, where i was able to take a small peek at the homosexuality chapter, so if this is too small for you to read here, you can check it out there: 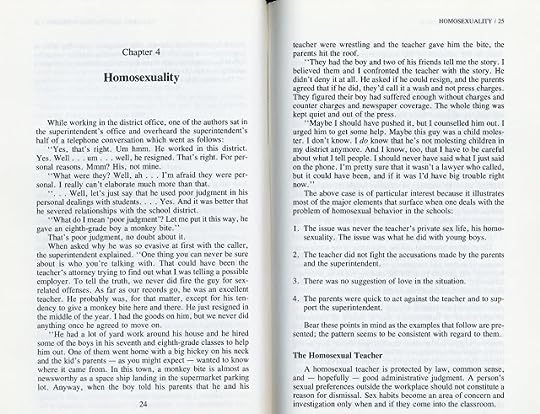 to summarize, in this case a homosexual teacher who was also a pedophile (allegedly), employed male students in a “yard work” capacity after which at least one of them returned home with “monkey bites”* and stories of “wrestling.” the teacher was dismissed, but no charges were filed. said the superintendent of schools:

“Maybe this guy was a child molester. I don’t know. I do know that he’s not molesting children in my district anymore.

To tell the truth, we never did fire the guy for sex-related offenses. As far as our records go, he was an excellent teacher. He probably was, for that matter, except for his tendency to give a monkey bite here and there.

the small part of the chapter that i can see doesn’t seem to have the appalling slant re: homosexuality i had fearfully anticipated when i first saw that table of contents, but it also doesn’t say that it’s a bad call to quietly let a monkey-bite-giving teacher go off to bite more kids in some other town.

some of the other pages on display are scary in a whole different way, both grammatically and for content:

Speculate in regard to the reaction of radically conservative groups – who have never supported public education and never will – such as the Moral Majority, the Ku Klux Klan and others of that ilk, if educators allow the public schools to become a modern-day reincarnation of Sodom and Gomorrah.

Do we over-dramatize the problem and its dimensions? We hope not, and we think not.

i am raising my hand to suggest you might be – sodom and gomorrah were straight-up party towns that didn’t even have ten righteous people to rub together. and those folks actually refused the offer of virgin girls because they wanted to know the newly-arrived grown men instead, which is exactly what you’d want in a school setting, so that’s both hyperbolic AND inaccurate. and what does “we hope not” mean? wouldn’t you hope that you were overreacting and the problem was smaller than this secular, imprecise notion of “sodom and gomorrah?” and is the same person who gave the go-ahead to the construction of that first sentence also the person who approved the cover design?

also from the (far too few) scans of this book on the awful library books site, from the chapter entitled Teachers and Mature Students, this line occurs. for real:

… sometimes the love is genuine, and happy endings do occur – albeit it at the expense of a near-ulcer for the administrator in charge.

and OF COURSE, there aren’t any scans of that page, but it’s cool as long as it’s true love??

again, this shit isn’t funny, and it happens, but this also threw me for a loop:

The book The Forbidden Apple resulted from a simple article that Dr. Ross wrote in The Executive Educator publication entitled, “What You Can Do When Teachers Get Too Cozy with Their Students.” The article caused quite a stir and elicited an unexpectedly large response. Readers wrote back with more than 90 per cent stating they were aware of teachers in their schools making sexual advances toward students and concurred with Ross’ advice as to how administrators must deal with the problem… This problem was never more timely. One respondent, an educator from Missouri wrote, “To deny this problem exists is no longer possible. It must be dealt with firmly and decisively.”

NINETY per cent? that’s really fucking high. and while i wasn’t in high school in 1985, my brother was, and i don’t remember him coming back with tales of: 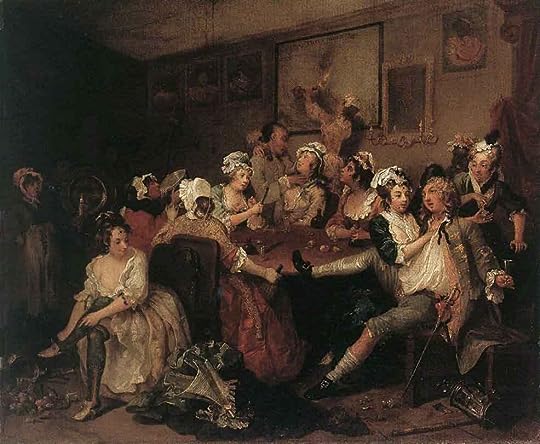 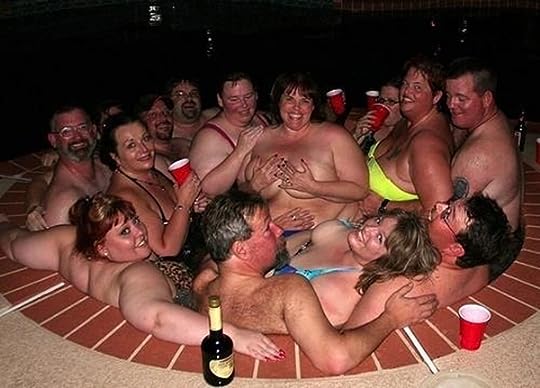 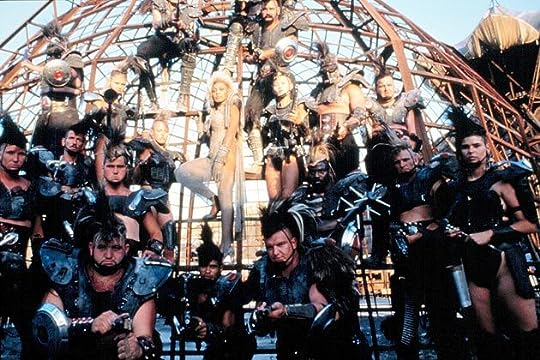 i mean, there’s so many reasons i need to read the full text of this book. these little teasing snippets are killing me with their contradictions and bad ideas. but surely, in context, it would be more reasonable, right?

*an expression i have never heard, and i thought it was some sorta lancelot link gone wild situation, but no – just hickeys