—hear me? This is Harry Lo of KNBR, the Bay Area’s real rock, broadcasting live because I have nothing else to do and no other way of getting the message that I’m still alive in here out to the world. I have now been broadcasting for twenty days straight. It’s almost Halloween, kids, and if anyone’s out there listening, I recommend against going trick-or-treating this year, because the streets are alive with the actual undead, which may make it hard to tell the kids in costumes from the people who want to eat your face off.

the temptation to open this review the way mira grant opens her chapters was too great to resist.

i have seen bunches of poopy reviews for this book. not “poopy” like they were poorly-written or even irrational in the things reviewers mentioned as bugging them, but just disappointed reviews from otherwise mira grant fanpersons.

and i agree with a lot of the complaints, but there’s something i find so soothing about her writing that just takes all the bad away and rubs my tummy while feeding me red starbursts. i can’t account for it, or articulate what it is that is so comforting about her style, because it’s surely not her subject matter of zombies and sentient tapeworms that makes me feel safe.

but her prose-hypnosis aside, this book is objectively weaker than the first. this was originally conceived as a duology that swelled into a trilogy. and this book suffers from middle-child syndrome, like so many middle books. it’s neither an introduction nor a conclusion, and sometimes it feels like it’s just plodding on like filler story, drawing out the tension before the third part can begin. there is a lot of repetition here, a lot of times when already-established facts are hit again and again, and hit hard. at the beginning of the book, this was very welcome, because lord knows i needed a refresher of the scientific intricacies she set up in the first book, but once i was already on solid ground, i found myself encountering the same reminders and i was like “I GOT IT, MORE ACTION PLEASE!”

and even the “don’t go out alone” parts, so charmingly sinister in the first volume, weren’t ringing my bells as much here. although some of them were great and i do still want them to be collected and sold as an illustrated companion book.

and if you are greg stahl, and tansy was your favorite character in Parasite, well i am sorry to report that she does not get a lot of screentime here. View Spoiler »however, her character has the potential to be very interesting in the third book. god, i really want that third book right now. « Hide Spoiler

so, yes, there were things here that i felt were letdowns after the promise of the first book, but i can acknowledge them without it diminishing my enjoyment of the experience of the book.

because i did truly love it.

and it’s going to be hard to talk about the book without spoiling the reveals from the first book, and i don’t want to invite the same kind of criticism of those cranky folks on my The Girl with All the Gifts review, so i am going to have to be a bit evasive here.

this story picks up from where we were left, desperately, at the end of Parasite. we know things now that we didn’t know before, and we are in the middle of some seriously chaotic circumstances while we are trying to wrap our brains around the crazy science and the various betrayals and so many different agendas that compromise our ability to trust anyone’s motives.

in mira grant’s worlds, “good” and “bad” are useless words.

but we have sal. in the first book, sal was a character coming back to the world after being in a prolonged coma, and having to learn everything over again. View Spoiler »or, you know—for the first time ever because TAPEWORM!!! AHHHHH! « Hide Spoiler she was, in many ways, as helpless as a child. but in this book, she comes into her own as a proactive character, and it feels really good to watch her progress. she retains some of the innocence and confusion inherent in her unique perspective, but she’s stronger, more strategic—she has a backbone. View Spoiler »of course, it kinda belongs to sally—HAHAHAHAHAHAHAHAAHA 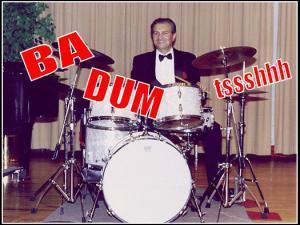 and girl’s got a line in the sand that you do not cross:

“Do you hear me, View Spoiler »Sherman « Hide Spoiler? I’m going to kill you. You can use my body for your fucked-up experiments, but you had no right to cut my hair. It’s not yours.“

do not mess with a lady’s hair. not even for science.

there are a lot of great action sequences in this book, along with more surprising revelations and more debates around medical ethics and the difference between “people” and “humans.” some turns are a little too convenient and some villainous moments are a little too cartoony or illogically short-sighted, but if you can roll with that, roll with it because nathan, doggies, candy factory.

and some sweetly melancholy insights from sal

View Spoiler » He was the one who had held my life in his hands and decided not to tell me what I was. How could I help but hate him? And at the same time, he was the man who had provided my medical care and taught me how to walk, talk, and think—even if he’d done it for his own reasons and to serve his own twisted ends, he’d done it, and that left me with a debt to him that I could never entirely repay. I wondered if humans felt this conflicted over their parents and teachers. I hoped not. It would be terrible to have an entire species with bellies full of mingled love and hate, anger and fear, walking around and thinking that they controlled the world.

but despite all the important developments that come out of this book, a lot of it is just treading water, preparing us for what will hopefully be a spectacularly satisfying grand conclusion.

we walked away from everything, moving toward the distant, terrifying future.

hopefully to TOO distant.

The broken doors are ready, you are very nearly home.
My darling child, be careful now, and don’t go out alone.

I don’t know why that lady transcribed my earlier reviews in allcaps like I’m some kind of derivative meme, but there will be no more of that nonsense.

This book made me angry. I was told there would be only two books, and now I am expected to wait for a third book like I have some kind of human-sized life expectancy? That’s just rude. So, yeah, I ignored this book. 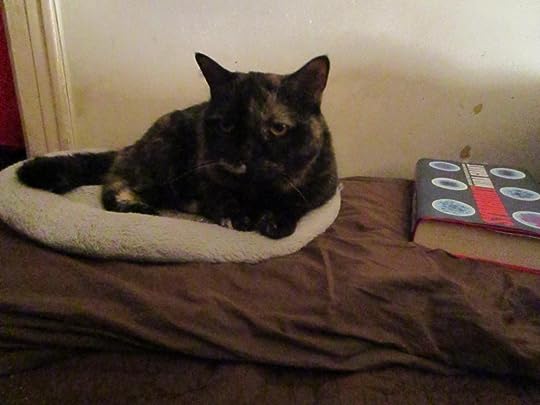 You can put it as close to me as you want, lady-person—I’m not going to read it. I am protesting this breach of contract.

Then the lady thought it would be cute to pretend to be a cat and “show me how it’s done,” but she’s not half as cute as she thinks she is. I send scornful looks her way. 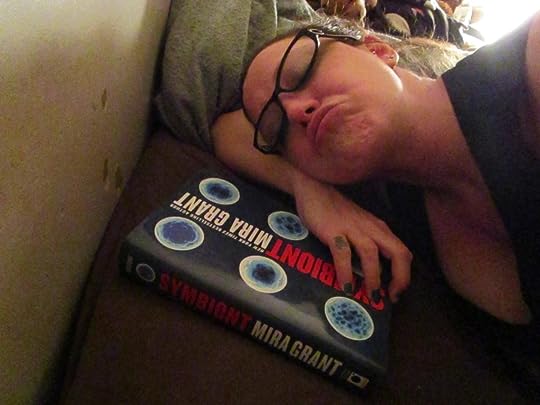 And I turn my back on you, lying book-liar. 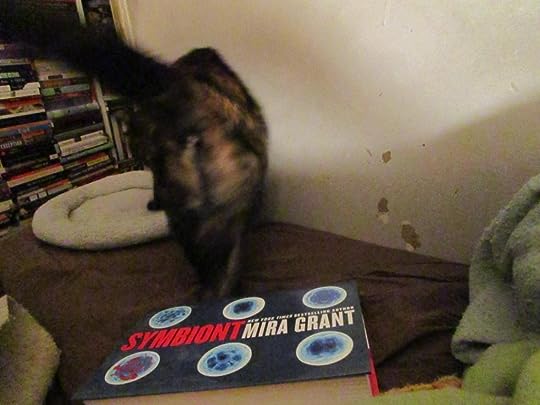 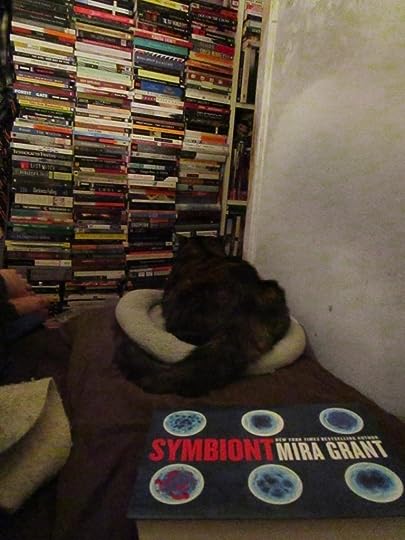 But then feeder kept bugging me about it, so I finally gave in because otherwise it’s all “blah blah blah” in my ears and I can’t even get a minute’s peace. However, I read it upside-down to show the book how little I care for its deception. 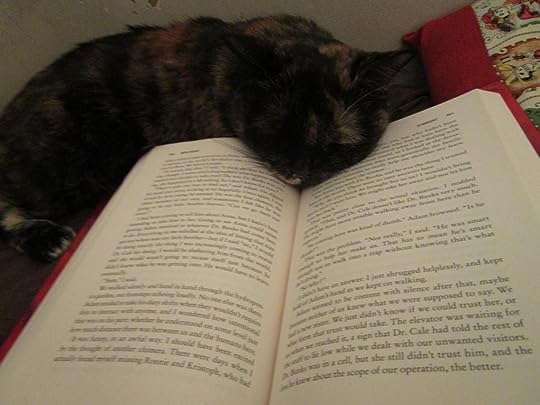 Conclusion: I do not like how dogs are portrayed as heroic in this book. It’s just more lying lies. This is not a book for cats, and later I will shred the dust jacket. But now I must nap.