Survive the Night by Danielle Vega
My rating: 2/5 cats

in a desperate attempt to squeeze some spooky-reads into october; a month where i’d foolishly made promises to read so many books that were so unspooky, i decided to plow through some YA horror because the pacing of teen fiction is perfect for little book snacks between responsibilities.

but i should have left this one alone.

true, i read it in a couple of hours and it is technically a horror novel so i guess it fit my needs, but i never felt scared or spooked or even entertained.

the cover is the best thing about the book 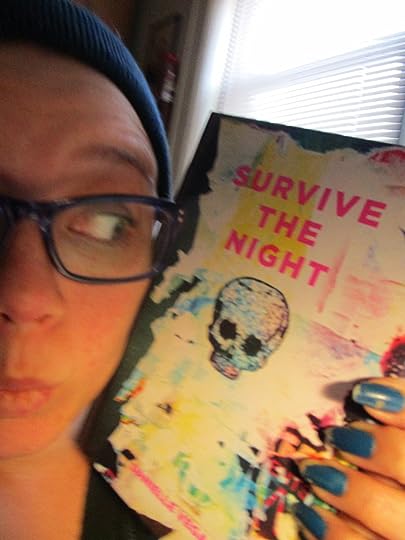 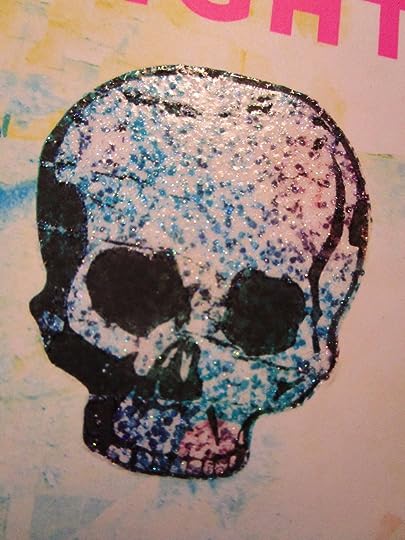 unfortunately, the prose does not sparkle at all.

there are two problems here: tone and characters.

if i had to summarize this book, it would probably be “careless but well-dressed teenagers work out their problems underground until someone gets murdered and things get weird.”

you know how This is Not a Test pretends it is being a zombie story before it gradually dawns on the reader that this book has a completely different and more rewarding agenda and that it’s using a horror backdrop to address real-life issues and that you don’t even need zombies when there is already so much horror in the world? this feels like it’s gonna be that for a really long time. fresh outta rehab, casey ditches her parent-approved slumber party with the wholesome soccer girls in mcmansion pennsylvania to ride off to new york city with the group of wild badgirls who are responsible for her needing to go to rehab in the first place. after an awkward reunion with her ex-boyfriend sam, who is playing a show at a club in brooklyn, all the pennsylvanians decide to go to this notorious super secret underground (literally underground) rave and party like it’s 1994. and then it’s just like any annoying teen party – casey tries to get back with her ex and acts bitchy towards competitors, girls go wild, drinking and drugs and terrible music occur, and it’s not until page 100 that a body finally drops. and even after that – when casey and her remaining friends are running through the subway tunnels, the memory of their friend’s blood and guts fresh in her mind, it’s still mostly about her wanting that boy back and taking a closer look at what she values in a friend. which is perfectly reasonable because the horror elements are way spread out and, along with “considering the consequences of our actions,” are mostly just punctuation and afterthought. and while a book like This is Not a Test can get away with making zombies the opening act to focus on a meatier headliner, this one doesn’t fare so well. it tries – there are serious issues introduced into the narrative: rehab and peer pressure and addiction and bullying, but they aren’t treated as serious issues and it’s all just froth. shana makes casey drink alcohol in the car over because

Shana groans. “Please tell me you’re not going to be all boring now?”

“What?” Shana rolls her eyes. “She went for drugs, not alcohol.”

she later spikes casey’s drink with ecstasy for helpfulness and the book’s like, “grr i am so cross with you, shana,” instead of treating it like an assault, which it pretty much is.

which leads to the problems i had with the characters.

golly, they make bad decisions. i mean, they’re teenagers, so it comes with the territory; i know i made some choices in my youth i wouldn’t make now, but come on! leaving aside the fact that the “invitation” to the rave comes from a shirtless and barefoot man with rotting teeth who is dressed like a clown and smells like garbage who physically picks casey up and licks her cheek before lighting a sparkler and making the announcement (and considering this is an all-ages club, is a real good way to get yourself in trouble, so it’s a dodgy marketing move) but leaving aside that going to a rave that uses a smelly clown as its spokesperson is still somehow appealing, once they get to manhattan, shana asks a homeless fella for directions and follows his spacey observations which leads to all these kids removing a manhole cover and descending a ladder to get to a rave. a rave. one of them is barefoot by this point because big-girl shoes hurt. she has also climbed a dumpster, flashed her panties and yelled a lot. many characters will willingly remove their shoes in this book. like, to play twister on a deserted subway platform with other kids who make bad decisions. later, they don’t really fret about walking down subway tunnels that are slowly being flooded – subway water-soup up to their knees, up to their thighs, then later there is swimming and spitting of water. 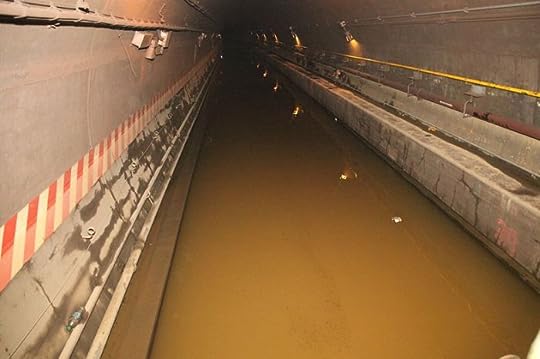 i know one does as one must in survival situations, but it’s never really mentioned how disgusting this is. cold, yes. annoying, yes. i think the water is described as “smelling like vomit” once, but vomit is the least of your concerns splashing around in a flooded subway tunnel.

oh, and one of the ladies is wearing leather pants. which can’t be good in the water and i’m pretty sure would eventually make it impossible to move. that’s another thing- i understand the willingness to ruin a pair of leather pants when it’s life or death, but early on, casey discloses about how long it took her to pick out her outfit for maximum impression, but then she’s totally fine playing paint-twister and wiping the paint all over her jeans like “this old thing?” who does that? but that’s all mostly minor brainfarty poor decision-making from kids drunk and excited to be underground and in nyfc. this one is unforgivable: the teen who is the first to get murrrrrderrrred wants to leave the rave early. when the mean bouncer at the manhole-entrance says that no one can leave before 5 am, she tells her friends that she’s going to bounce with the homeless fella who got them in in the first place because he knows a secret exit.

and no one says “this is not a good idea because we know nothing about this homeless fella!”

and no one says “this is not a good idea because you are intoxicated!”

and no one says “this is not a good idea because what are you going to do in the wall street area of nyfc after midnight when you live in pennsylvania and the car is still parked in brooklyn?”

and no one says “this is not a good idea because wandering through the subway tunnels in your fancy clothes with a stranger is never a good idea, even if you know him and he’s not a loon!”

and no one says “this is not a good idea and i will come with you!” because they are terrible friends.

bad characters making bad decisions in a book that is only occasionally remembering it’s supposed to be horror, so it will trot out some splatter and gore and casey will lose another friend and then she will go back to getting mad that shana is standing too close to sam and what the heck is that all about? and then she’ll probably fall over. casey falls a lot.

and ugh, that ending. it’s dumber than a barefoot teen in the financial district.

apparently they put forgiveness in the drinking water in pennsylvania. and apparently i am alone in thinking that a soccer-shaped balloon is maybe undermining the gravity of the situation. or maybe not – this book is pretty terrible at psychological repercussions and you could tack its ending onto a story about a girl who got the chicken pox and it would be a seamless graft.

i still want to read vega’s first book, because it sounds like a cool blend of horror and camp, which i think can work so well when it’s done thoughtfully

but what cannot work is a combination of horror and uninteresting.