One, two, three days of waiting for the end of the world, or something like it, to arrive. Listening to reports of the virus infecting the passengers and crew of the ocean liner Queen Mary in the mid-Atlantic, turning it into a literal death ship. Then sporadic reports of outbreaks in Europe—followed by a day’s silence that raised Trina’s hopes that perhaps the virus had blown out to sea, might never arrive here…

Until, on the fourth day, the sirens began screaming.

this is a perfect short story and it has, in a small but significant way, changed my life.

i have been reading one of these free tor shorts each week for…seven years? and one week, back in 2016, i attempted one that was part of the wild cards-verse, Nuestra Señora de la Esperanza. although this “series” has existed for more than 25 years, this was my introduction to its world, and i was so confused by the details (which confusion my review certainly reflected), that every time a new wild cards-shorty dropped, i would mutter “fool me once…” and would comb thru the archives for another one to read for that week.

i didn’t feel like doing that this week, since the pool of unread-by-me shorties has been shrinking, and many of the ones i haven’t yet read have been avoided for reasons, so when i saw that this week’s offering was a wild cards story, i begrudgingly decided to give it a try and WOW! i’m so glad i did!

this is a perfect introduction to the wild cards universe. from the intro: In Alan Brennert’s “Skin Deep,” we see for the first time the events of September 15, 1946 from the viewpoint of someone living on the West Coast of the United States.

i’m not sure why, in a quarter of a century’s worth of expanding the universe, no one has ever written this particular angle, but i’m so grateful that brennert took on the task, because now i get it! i’m sure i missed a few little easter eggy bits that people more familiar with the series would have noticed, but for a NOOB like me, it was a great introduction to WHAT HAPPENED and now the pool of unread-by-me tor shorties has increased exponentially!

it’s a lovely story, thoughtful and well-crafted, taking its character through several stages of emotional development while providing ample context for what’s going on in the world around them.

i had a twinge of apprehension when that particular real-life-person appeared, because it was clear where it was headed, and i was worried that it would turn into a silly pop-culture reference for-the-sake-of, but it was so seamlessly incorporated into the narrative and expanded into something one hundo percent satisfying with wonderful closure.

i loved this story and i appreciate it so much, because now i don’t have to grumble every time there’s a new wild cards story, and i am looking forward to going back and reading all the ones i’ve avoided all these years. i don’t think they will all be as good as this one, but at least i won’t be as adrift as i was back in 2016. 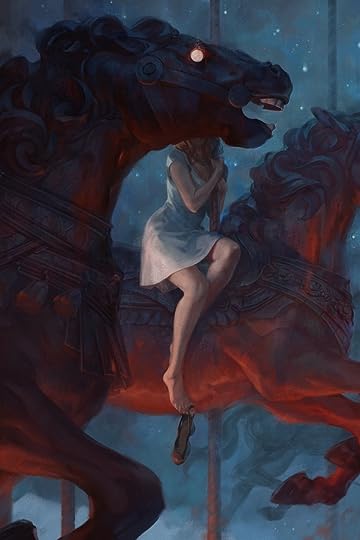