And with the rain at their backs, a dark bank of clouds looming over the horizon, and no food or water, they headed down into the unknown valley.

this is a very wholesome book about friendship and it’s a decent enough survival story, although in terms of EEK, PERIL it is closer to Hatchet than Be Not Far from Me.

wilderness survival stories—i’m a fan. Island of the Blue Dolphins was probably the first one i ever read, and i must have burned through it a hundred times between the ages of 7 and 12, appreciating the similarity between karana’s name and my own, and secretly yearning for the chance to tame a wild dog and build myself a house made of bones.

now that i am old and doughy, i don’t think i’d survive for too long in the wild, but i still like reading about people who do and can, and i always pick up a few just-in-case tips along the way.*

Be Not Far from Me is the best one i’ve read recently, starring a badass girl whose ample woodsy know-how is put to the test in a series of brutal and intense situations. by comparison, Switchback (whose author previously wrote a book called All the Feels), is practically gentle, and although it’s marketed as YA, it’s probably also fine for the older side of the middle-grade readerverse.

it features besties-since-childhood ash and vale, two canadian teens who become separated from the rest of their 10th grade PE class during an overnight nature outing in waterton lakes national park (i.e. the canadian rockies).

ash is a real indoor boy—a lanky and klutzy gamer who has never even been on a hike before now, who prepared for this mandatory wilderness adventure by staying up until dawn playing on his computer before tossing some doritos and mountain dew in a bag.

he’s goofy and well-liked, and he tells the geekiest jokes of all time

“What do you do when the world champion of Scrolls of the Illuminati knocks on your door?”

vale has more outdoorsy experience than him; both physical-practical and theoretical-academic, and she actually enjoys being out in nature, but ash is her only IRL friend, and she’s bullied relentlessly by the rest of her classmates, so she’s not thrilled to be heading into the wilderness surrounded by people determined to make her life miserable.

it’s unclear just what makes vale a target for bullying. she’s aroace, but that doesn’t seem to be the motivating factor for the abuse. when it comes to the bullying, the writing is very unspecific and vague—things like, She’d been the butt of several jokes in the short time since she had switched seats.

the bullies think she’s boring and they call her “valley girl,” which i assume is clever wordplay on her name, but unless the phrase has some other meaning in canada, the bullying doesn’t seem to be tied to anything she is or does, she’s just…disliked. she does kind of give off that tracy flick energy, especially when it comes to litterbugs

and she’s also a bit stiff and humorless and unwilling to engage with people other than ash and her online LGBTQIA community, but whether that’s the chicken or the egg of the bullying is unclear.

suffice it to say she hates them, they hate her, and now they have a photo of her changing in the locker room, so it doesn’t matter why she’s been singled out; they’re just little shits, being shitty.

recently, ash and vale have drifted apart slightly—vale quit gaming with him when she started getting bullied online (again, providing an explanation about how and whyyyyy doesn’t seem to be important to the author), and ash never stands up for her against the rest of the class—he’s a puppy defusing situations with humor, but he’s too insecure to actually take her side in any of these confrontations.

so, even though she’s grateful to have ash along on this trip as a buffer against the bullies, there’s a new little crack in their friendship that’ll be tested to the extreme when they become separated from their class and have to rely on each other to make it out alive in the face of exposure to freezing temperatures, snow, hunger, injuries, and nature’s myriad furry dangers: cougars, bears, and elk (which are more formidable than i’d reckoned**), along with more of ash’s jokes:

“Why do you always find demons in the same game level as ghouls?”

“Because demons are a ghoul’s best friend.”

which jokes may be the biggest danger of all.

in the lineup of “survival stories i have read,” it’s not my favorite, because i’m a monster who prefers a grittier edge, but i thought their friendship was charming and their struggles were portrayed realistically, both in their survival-competence and in their relationship.

i just wish there had been more character work done on vale. the lack of explanation about why she’s been singled out is only part of it—i suppose leaving out the details of what it is about her that brings all the bullies to the yard makes her more relatable—a sort of archetypal ur-victim, but she also has this intense fear of abandonment—she’s constantly on edge, braced for ash to stop being her friend, and she becomes disproportionately panic-stricken when she thinks he has left her in the night. i get that it’s scary to be alone in the woods, but her fear was more about the emotional insult of being discarded than about the dangers of being left alone in the wilderness. there’s a lot about her psychological makeup that’s left unexplored, and i wish i understood her as a character better.

still, i appreciate that stone, like mcginnis in Be Not Far from Me, addressed the additional discomfort of enduring menses whilst trying to survive in the wild, because that particular trial was never addressed in Island of the Blue Dolphins, and i think it’s an important consideration.

a medium book for me, but those less marinated in survival stories will probably get more out of it.

* i have one technical question about how fire works.

At one point, Vale found an entire dead tree that was small enough to drag with her. inspired, she pushed the entire log into the fire at one end, and as it burned, she moved it inward into the flames. It reminded Vale of the way you could sharpen a pencil down to nothing. It was a solution that gave her time to stop gathering wood.

genuine query for all the boy scouts and pyros of any gender: wouldn’t the fire just keep going up the trunk? does fire respect boundaries?

an excellent drawing, for reference: 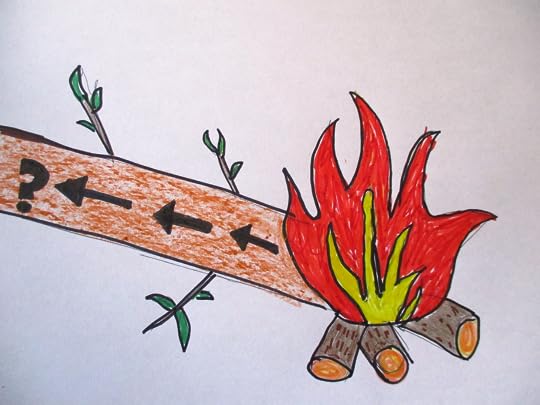