i was so excited a few months back to hear that steve erickson had a new book coming out, and so titillated by jonathan lethem’s saying of it, in granta (wayyy back in december 2015):

It’s my best of the year, but you can’t read it yet…I’ve read every novel he’s ever written and I’ll still never know how he does it; Erickson’s not so much a writer’s writer as a tour-de-forcer’s tour-de-forcer.

BEST OF THE YEAR, and he was saying that more than a year before its publication date.

it’s hard not to be intrigued by that.

and i gotta say – despite this being a great year for books already, this one is definitely at the top of my list, too. of course, since it’s pubbing in 2017, who knows where it will end up, but i’m telling you – this is some fantastic erickson here.

this is my fifth book by him, and it’s hitting all the things i love about his writing. his style is unmistakeable, and i have this visceral warm-bath response to it. i don’t even know how to describe it – you just know it’s him. it’s not necessarily in the themes or words, although he does revisit a few touchpoints in his work – music, dread, liminal spaces, the “national dark,” but there’s something about his writing – its urgency/intensity/the weight of his ideas beneath a deceptively delicate sentence-flow, i was hooked immediately into this one and it reminded me of The Sea Came in at Midnight one of my all-time faves, and its sequel Our Ecstatic Days.

that’s not to say i understand all of this one, because i don’t. it’s steeped in a musical scholarship far beyond my own, and he’s very coy with the details, referring to certain songs only by their lyrics, or musicians by their biographical details. i recognized plenty of the details (including the nod to my beloved leonard cohen, although SRSLY, erickson?? you neglected the opportunity to quote tower of song in a book about a tower … of song?)

and there are times when he lost me with sentences requiring some brow-furrowed unpacking:

Neither has yet learned how time lays relentless siege to the denials of hearts drawn most inexorably to the truth.

but, as a writer-character in this book claims,

and that applies to erickson full-bore.

at its most basic, this book is about the sudden appearance, in 2021 south dakota, of the twin towers. and in those towers (or one of ’em, anyway) is the full-grown manifestation of elvis’ stillborn twin brother jesse, negating the life and influence of elvis, causing an alt-history ripple to barrel through the american landscape, changing the entire shape of american music, impacting the world beyond its borders. spoiler alert – no elvis = no beatles.

it’s a playful road trip novel full of juxtapositions, missed opportunities, america, rock and roll, racism, emptiness, music crit, social commentary, “supersonik”, the role of luck in both fame and history, a mysterious secret highway connecting the american coasts, and the idea of identity: either of self, cultural, or national:

it is, indeed, about everything.

in many ways it reminded me of A Visit from the Goon Squad, or delillo when he’s on his game, but it’s a book whose connections are implicit or suggested rather than spelled out, and a lot of it is hinged to the idea of twinnings – twin brothers, twin towers, twin appearances of these towers, alt-world “twin” versions of historical figures, surrogates commissioned to pass as a famous author across the world, this warhol portrait of elvis 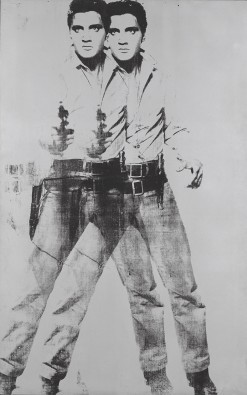 twin playlists and songs paired up against each other in thematic face-offs:

he even floats the twinning in the casual descriptions of musicians:

…a Detroit ex-husband-wife team posing as brother and sister who could be twins.

and there’s the constant flipping of the world we know to show the (stillborn) world that might have been.

This moment, like all of Jesse’s moments, exists within the shadow of the other life never lived.

it’s just brilliant all around.

and if you don’t understand all of it, don’t worry – you’ll still enjoy it, and erickson’s probably used to people getting lost in his books, if the writer character’s comment is any indication:

People always joked (maybe) that he should give up writing books for mixing drinks, to which his father muttered, “Yeah, no one’s ever said, I don’t understand your martini.”

an impressive achievement here. trust me, trust lethem, trust erickson’s reputation – this is well worth your attention.

EEE! fastest netgalley approval ever! they could tell how badly i WANTED it!