Ravaged by the Magic Pebble by Fannie Tucker 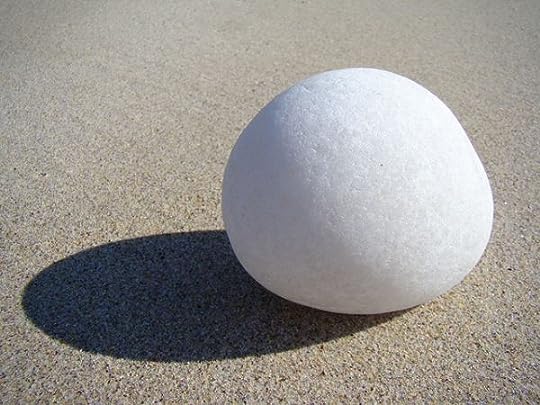 so, in this story, we find the lovely camilla walking on the beach of the jersey shore one evening, taking solitary respite in the beauty of nature to distance herself from the hookup scene going on in the nearby clubs. she’s already consumed a few mojitos, so when she sees a tiny little pebble rolling about in the wavelets at the water’s edge, it makes perfect sense that she would be filled “with an inexplicable dread” at the thought of it getting sucked back into the ocean’s secret depths, and feel compelled to snatch it up. (i do not make my word-choices lightly, friends. this is foreshadowing)

it’s not a particularly striking pebble, just Three inches of smooth, ocean-worn white marble, elongated with a slight curve, but once she has it in her grasp, she feels tingles running all through her, and has a hallucinatory episode in which she is confronted by images of ancient rome, the castration of a statue, and then … herself. 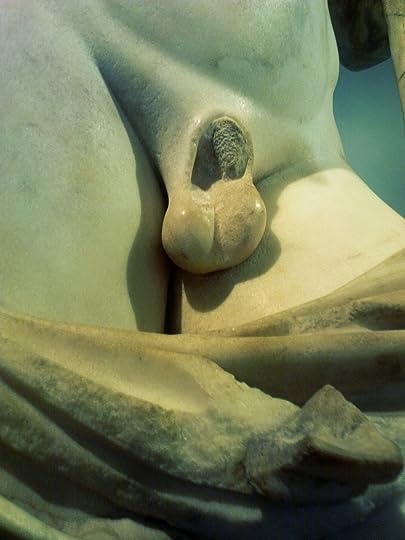 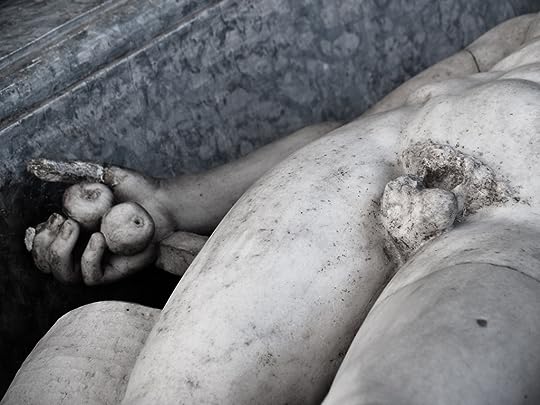 she hears a whispered voice on the wind, inquiring

“Are you really there? Is this a dream?”

followed by another voice that is anything but whispered

startled, camilla is overcome by the impulse to hide the pebble she’d snatched from the surf, and braless as she is, she does the only thing she can think of with her limited imagination. and, yes, it involves more snatching.

Without thinking, she lifted the dress’s hem and slipped the pebble into the front of her panties before turning to see who had called her name. 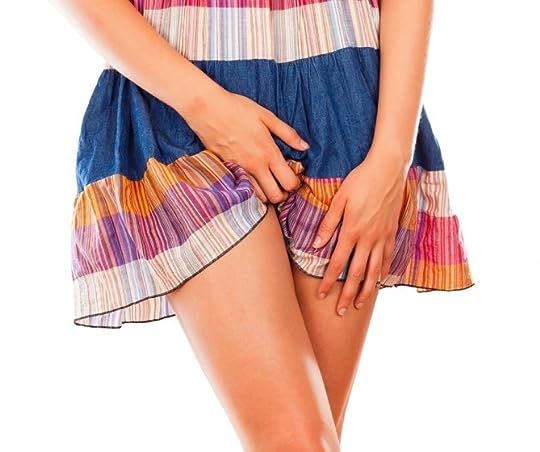 this “without thinking” will become something of a pattern for camilla.

this second voice belongs to vinnie. you know vinnie, right? he’s this guy: 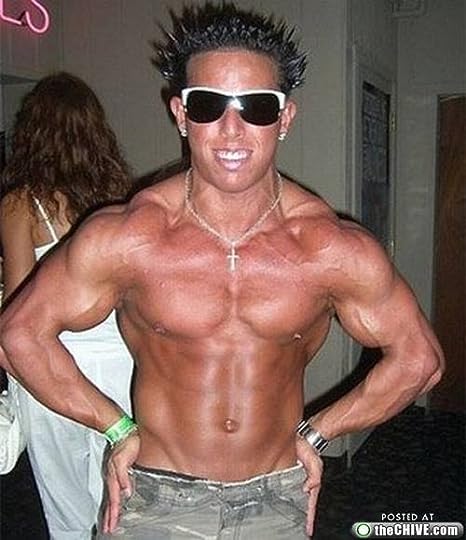 His bulging pecs bounced up and down as he jogged toward her, his big stupid grin framed by a goatee. Vinnie was a typical Jersey guy, with skin tanned until it exuded an unhealthy orange glow and bleached spikes jutting out of his head. He had a weightlifter’s body, courtesy of illegal pharmaceuticals, and a simplistic view of what women wanted.

He trotted to a stop in front of her, not even bothering to hide the way he ogled her cleavage. His brown eyes held a dullness, as if sun and steroids and cheap liquor had long ago erased any glimmer of intelligence. “’Ey, babe, we didn’ get a chance to talk.  Whaddaya doin’ out here? Dey got dolla longnecks back at the bar.”

Camilla desperately wanted to be alone so she could pull the pebble out of her panties and just… stare at it for a while.

but vinnie’s got more on his mind than just ogling cleavage. and he gets a little grabby. 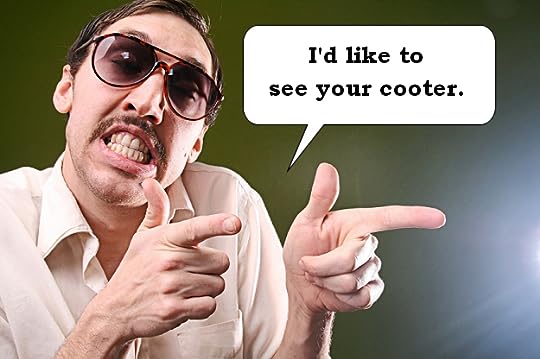 sorry, man, there’s a pebble in it right now. and the pebble is becoming as frisky as vinnie

Camilla gasped as she felt a pulsing sensation against her pubic mound. The pebble had slipped down toward the crotch, and now it hummed with some otherworldly energy.

the pebble-voice is displeased with vinnie’s clumsy attempts at seduction. as anyone already occupying a woman’s vagina would be.

“Who is this… clown? Is he your lover?” Camilla felt an angry buzz between her thighs, a stir of jealousy from the pebble that had somehow worked its way back into the silk crotch of her panties. That buzz didn’t relent, but swelled in its intensity, sending a surge of sensation through her that made it difficult to think straight. Her skin grew flushed and hot, and again she felt a burning need to pull a man’s big, bulging body against hers, to feel his kiss penetrate her lips, to feel his hard…

but let’s not get ahead of ourselves. camilla is still dealing with the difficulties of carrying on a simultaneous conversation with vinnie and this disembodied voice – who has officially identified himself as pietro trevisani, master of marble – and both of them are attempting to romance her, in their own ways.

Camilla pressed her fingers against the front of her dress, trying to shift the pebble upwards. It had slid a little too far down, a little too close to something she wasn’t sure she should let it touch. Even if she wanted to.

camilla’s trying to talk, avoid orgasm, and also keep vinnie’s cray-cray sensors from activating. it’s a lot to accomplish for one little dummy.

She didn’t like Vinnie, but she didn’t want him going back to her friends and insinuating that she was crazy, shoving rocks in her panties and striking up conversations with Renaissance sculptors. 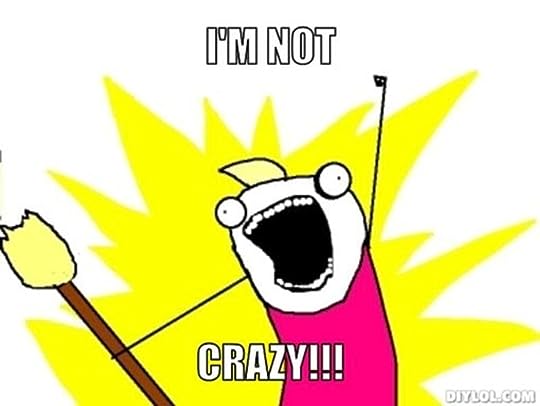 eventually, vinnie goes a bit too far for pietro

well, not nothing but a disembodied voice, because once vinnie shoves his hand in camilla’s pebble-storage area, as bewildered by what he finds as stephen rea in the crying game,

pietro seizes the opportunity to invade vinnie’s body, turning it from an overtanned douchebag to a pale and hard statue of a real man. well, a statue-man, but you take my point. 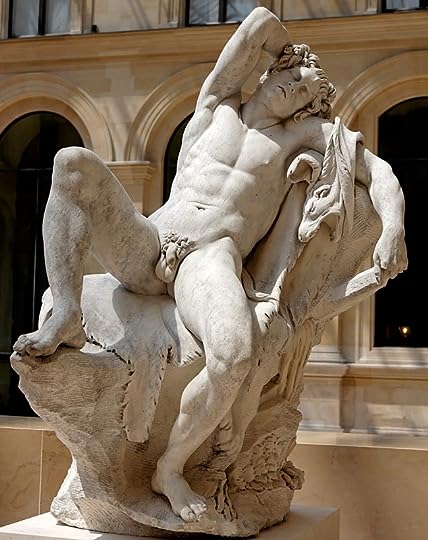 and he’s eager to invade another body, but in a sexxier way this time ’round.

He pushed the straps of her dress off her arms, and Camilla reached back and loosened the zipper. The dress slipped down to puddle on the wet, firm sand. She kicked off her sandals and stood before him, naked but for a pair of purple silk panties.

awww, those panties were his home! and pietro’s ready for his homecumming, all right!

he’s no longer just three inches of old statue-peen, now he’s all grown up! and up and up and…

Smooth and thick, it rose from his groin like a marble column in some ancient ruin, every inch rock-hard in truth. It had the weight of stone, not flesh and blood.

and he’s got something to declare

“Take it,” he told her. “Take it as deep as the ocean that held me for so long.”

ooh, nothing is more of a turn-on than suggesting that a woman’s vagina is as capacious as the ocean. times have changed since you last talked game to a lady, pietro. but camilla’s not turned off by this command/comparison, although she’s about to learn that, amorous similes aside, ancient statues aren’t the most considerate lovers.

Pietro felt her surrender and knew that he had tamed her. She was his to do as he would, and at last he withdrew his manhood.  Camilla’s saliva gleamed on the marble rod as it wavered in front of her face, and she gulped a desperate breath of air as she readied herself for the next plunge. Then the next. Again and again, Pietro plumbed her depths, pushing himself into her throat and holding her against his crotch until her body gave out. After a few minutes, a sheen of sweat bathed Camilla’s naked form, and she knelt before him, gasping and broken.

was it good for you, baby?

Camilla’s knees and hands dug furrows in the beach sand as his forceful thrusting pushed her slowly forward. Each time, Pietro dragged her back, and she sensed his building tension as he worked himself into a frenzy. A vision flashed through her mind – herself as a block of stone, Pietro a mad sculptor, his cock the chisel that he used to shape her into something new. 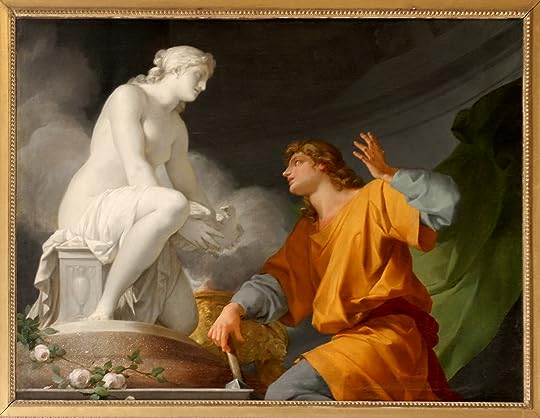 come on, camilla, make with the self-respect! don’t let this statue push you around, getting sandburn on your knees…

but she’s lost in the moment.

Her heaving body brought Pietro to his own climax moments later, and she felt his stone cock throb inside her as he let go.  Something hot and thick spurted into her, bathing her cervix in rich, heavy gobbets of molten seed. Fleeting questions bounced across the surface of her mind like water droplets on a hot skillet. Was it Vinnie’s semen unraveling inside her, or something entirely different? Could a man of stone make her pregnant? Questions for later. For now, there was no thought, only the sensation of Pietro’s pulsating member as he emptied himself inside her. 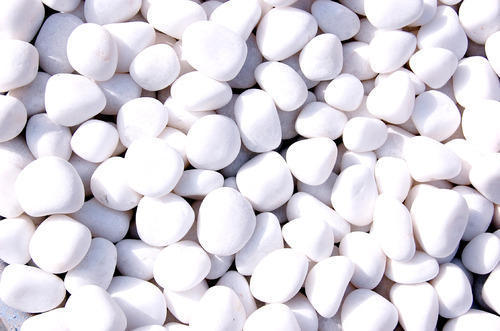 the post-intercourse blather is strong with camilla:

“I wouldn’t have, you know, but there was something about how you made me feel. Was it magic? Damn, I feel like an idiot…  hey, what are you doing?”

what he’s doing is returning back to the ocean, having gotten what he came for and not sticking around for breakfast.

or, in the NSFW or minors version:

View Spoiler »yeah, i’m making you work for it, but it’s worth it « Hide Spoiler

the moral of this story is – don’t put shit you find on the beach into your vagina. 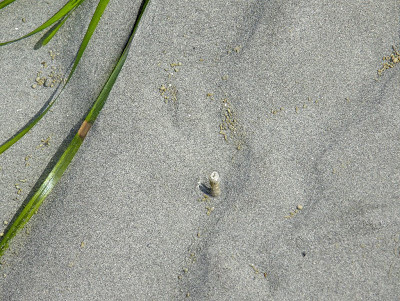