Mounted by a Monster The Trash King by Mina Shay

so here we have our heroine, brandy. she is at the local dump, searching desperately for her commemorative tonya harding hubcap. this treasure had been thrown out in a rage by ken, the spiteful “yuppie bastard” with whom she’d been shacked up. ken was incensed when he caught her providing oral pleasures to a biker, and callously tossed the commemorative tonya harding hubcap in the garbage, which is the rudest thing a person can do to someone they are sleeping with. i mean apart from blowing a biker.

brandy’s going to get her commemorative tonya harding hubcap back, and then she’s got some other revenge plans up her … sleeve.

Brandy decided to suck every cock she found just to get back at Ken.

atta girl, brandy!!! that is a super-empowered attitude you have there!

she’s got other problems with ken, though. he’s got all this money, and no clue how to spend it properly

Money was meant for the good things in life, like alcohol, cigarettes and cover charges.

Brandy wished she’d had time to change out of her Daisy Dukes into something more appropriate for rooting through heaps of trash, but she couldn’t waste her time getting down to the dump. Someone else might claim her hubcap!

like most heroines in monsterporn, brandy is dressed completely wrong for her intended activities, but completely appropriate for attracting monsters. and she does attract a monster. she attracts … the trash king.

and what is the trash king? i’m not … sure. not really.

The Trash King was filthy. He stood at least six feet tall and was covered in grayish, pock marked skin. His ragged clothing was four layers deep, fraying at the edges with numerous holes showing deeper layers of clothing. His jeans looked too short for his legs and his boots too large for his feet. The clothing would have been hopelessly out of fashion even if it had been clean and whole. Beady little eyes peered out from his oversized brow. His arms seemed too long for his body, hanging down far too low at his sides. Brandy wasn’t sure if he’d ever been human, or if living in the trash heaps had somehow changed the man into something else.

so it’s like … a shabbily dressed dude?? who may or may not be human?? like a cross between a hobo and a scarecrow? 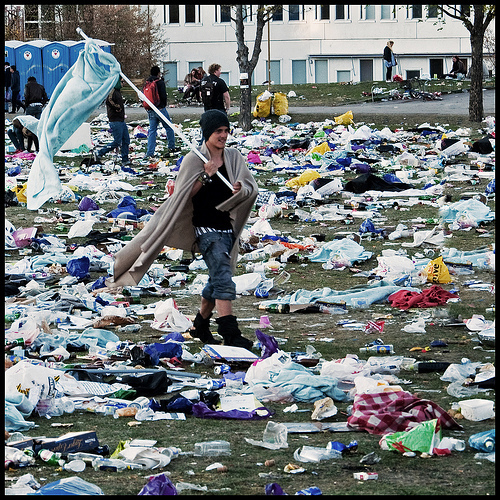 but as little as we know about the trash king, he certainly knows all about brandy. and he’s about to KNOW brandy, you dig? how does he know all about her?? and all about ken??

“I get your trash here. I get everyone’s trash here, from that street. You can learn a lot about a person from their trash… [ken] really needs to learn to shred his bank statements.”

and the trash king, unlike ken, recognized the value of brandy’s commemorative tonya harding hubcap (sadly, not a real thing that can be bought on ebay. i looked) and he’s not giving it up. looks like brandy’s gonna have to negotiate.

she plans to seduce the trash king to get her commemorative tonya harding hubcap back. but she doesn’t even have to make the first move. the trash king, who is very presumptuous, no matter how much he knows about brandy and her loose ways from her trash, just whips out his peen with no provocation.

Brandy never even saw the grin on his face. All she saw was cock and her body reacted instinctively. Brandy was a moth and she’d seen flame. She quickly stepped forward and knelt down on the hard ground in front of the Trash King. She wasted no time in greedily reaching out and grasping his grayish-skinned cock. It weighed heavily in her hands, full of promise.

oh, brandy. i know you vowed to suck every cock you found, but did you need to lead with this one?? this one that you refer to as “mystery meat??” but that commemorative tonya harding hubcap isn’t gonna restore itself to your mantelpiece…

Brandy suspected he was close to coming and wondered what the trashy man’s come would taste like. 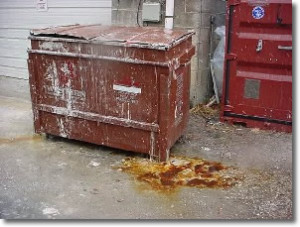 and then there’s a lot of blah blah blah. and sex sex sex.

he bends her over a sofa in the middle of one of the trash heaps because you gotta treat a lady right. 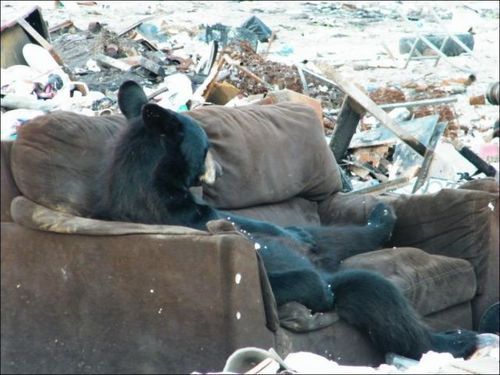 and unlike all the other mina shay bonbons i have read, this one reads almost like a parody of monsterporn. no, like intentionally. i mean, this must be meant to be funny, right?:

A couple of springs rose up through the exposed bottom of the sofa. It smelled like her grandmother. The dead one.

and then, she gets spanked by the trash king. which should be a whole ‘nother story because it’s a priceless title.

they enjoy some conversation in the middle of their romantic lovemaking

“Yer a dirty little slut, aren’t you? Right at home amongst all this trash.”

“Yes, I am!” she agreed wholeheartedly .

oh, brandy. you are too eager.

and trash king – amongst? no need to overcompensate with the flowery speech just because you live in a trash heap. i mean, you are still the king. of the trash.

and then more sex sex sex, and since it is essentially human-on-human sex, it’s all very perfunctory and vanilla to this monsterporn connoisseur. no fangs, no dragon tails, no big furry beasts. yawn city.

just the bland and obligatory descriptions of the old in-and-out. i mean, apparently the trash king is hung, but even that is just ho-hum.

His cock filled her in a way that her human partners never had. She grit her teeth and braced herself for his continuing onslaught. She beamed inwardly in pride when her pussy took the entire size of his cock.

because it’s important to take pride in one’s work.

and that’s pretty much it. they are both pleased with their orgasms, and while the trash king will not give brandy her commemorative tonya harding hubcap back, he will allow her to crash with him. “…the way I see it, it looks like you need a new place to stay for a bit. You stay here in my RV and you can look at it every day. And I can fuck you senselessly every day, too.”.

which pleases brandy. and the trash king spanks her once more as punctuation, and they go off to drink cans of piss-beer together which is the white trash equivalent of riding off into the sunset atop a white stallion.

mina shay! you can do better than that, girl! and brandy? no, you’ve pretty much hit your glass ceiling there. sorry!