A river of black, wet earth and pebbles and moss and tiny blind helpless worms erupts out of Eurydice’s smile, splattering so hard onto his mother’s perfect plate that it cracks down the middle, and dirt pools out across the table and the worms nose mutely at the crusts of the almost-burnt toast.

He clenches his teeth as he clears the dishes. Eurydice stares up at him, her eyes swimming with apologies.

this is a chillingly beautiful rework of the orpheus/eurydice myth. in the original, you will recall, orpheus’ attempt to rescue his dearly departed bride from the underworld soured when he disobeyed the pretty straightforward instructions to not turn around and look at her until they were well out of hades, and when he did, she was swooshed back down to the land of the dead.

this is what happens when you don’t look back. it is much, much worse.

valente’s version unfolds in close third person, following orpheus’ POV through his new life with his corpse-bride, her decaying body really putting a strain on their relationship.

it’s a very modern adaptation—eurydice in a smiths t-shirt drinking lamb’s blood microwaved by her rock star spouse, and it features a number of cameo appearances by familiar-but-tweaked characters—sisyphus in a t-shirt that says Rock ’n’ Roll Forever, cerberus as an emotional support dog, prometheus lighting everyone’s cigarettes, etc.

some of these little easter eggs were great, some a little too on the nose, but i appreciate that she included so many in-jokes for those familiar with the story or those fluent in ancient greek (or fluent in googling ancient greek*) i’m sure i missed a bunch of references—what, pray tell, is the significance of all the vintage star wars glassware?

DIGRESSION: when i finished reading this story, i did a little refresher on the original myth, to see if i could catch any more of the references, and i discovered that orpheus’ father is, in some versions, king oeagrus of thrace, but in others, it is apollo. which, yes, makes him eurydice’s half-brother. i don’t know if that matters when the d in the dna stands for ‘deity,’ and considering how free with the d those olde timey gods were, everyone’s sharing some of the same god-genes, but it’s an interesting detail new to me. 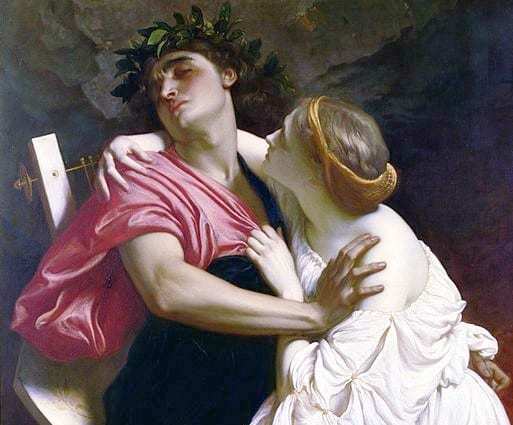 anyway, if you aren’t familiar with the source material, you can read this as a story about a relationship that should have ended a long time ago—after all, marriage is hard enough when both participants are alive and don’t need to be scrubbed of persistent mold on a regular basis. true love never dies &yadda, but this is not a love story, and their relationship is more toxic than any of the stuff oozing out of poor eurydice. orpheus is a shitty husband—a golden boy whose music was so powerful that “the world opened itself up to him like a jewelry box,” and he’s an entitled and selfish man resentful of eurydice’s lack of gratitude for bringing her back to the living world.

She didn’t even thank him for making her breakfast. He doesn’t want that to annoy him the way it does, but he can’t shake it. She owes him. She owes him so much.

his attitude is even more reprehensible when it becomes clear—to everyone but him—that he’s holding on, not to who she was before she died, but to the idea of who she was before she died. to him, eurydice is “adoration in human form,” and he doesn’t care about how she feels, but how she made him feel. the very foundation of their love story is rotten:

He was famous. She was beautiful. What else did anyone need? They were young and it was easy. Orpheus saw himself as he knew he could be reflected back at him in that heated, shimmering stare. He wanted it. He wanted that ease forever. He wanted himself as she saw him.

Just because he went home with a maenad that night and had to be reminded of her name when they met again a month later doesn’t make it any less love at first sight.

Orpheus has repeatedly explained that to their therapist.

their new reality takes some getting used to, and although eurydice frequently comes across as passive and pliable, there are sharp moments where her bitterness pokes through.

She runs a couple of miles a night, hood drawn up, headphones in. It tenderizes the meat. Orpheus has tried to tell her it isn’t safe for her to be out alone. She laughed in his face.

one of the most intriguing things about the story is how little we know about “this” eurydice. because this is all told through the might-as-well-be-narcissus perspective of orpheus, we only get tantalizing glimpses of her life in their therapy sessions (bruises on her arm the night they met whose origins are undisclosed-but-hinted-at, her own abandoned musical aspirations he knows nothing about). she doesn’t get much of a voice, but she certainly has a presence, and the hair dryer scene’ll rip your heart out.

she only gets one extended speech, delivered towards the end of this story, but it’s a killer.

View Spoiler »“Why didn’t you turn around?” Eurydice whispers.

Orpheus tells the truth. “I knew you were there, baby. I never doubted it for a minute.”

Children yell and play in the neighbors’ gardens, high-pitched giggles fizzing up into the streetlights. “You didn’t know. You assumed I was there. Behind you. Like I’d always been there. Behind you. You couldn’t even imagine that I might not do as I was told, that I might not be where you wanted me to be, the moment you wanted it. That was my place, and you assumed I would be in it. What in your life has ever gone any way other than as you wished it?” « Hide Spoiler

oops, i accidentally wrote a long review for a short story. 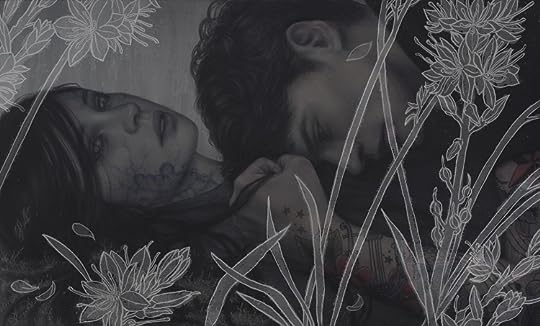 * although eurydice’s menin aiede qea sweater required an extra step; the phrase—according to some guy on the internet—is a conflation of two different translations of the iliad’s opening line: menin aeide thea and MHNIN AIEDE QEA. why all-caps? i don’t know; ask that guy on the internet.