Everything Is Teeth by Evie Wyld
My rating: 5/5 cats 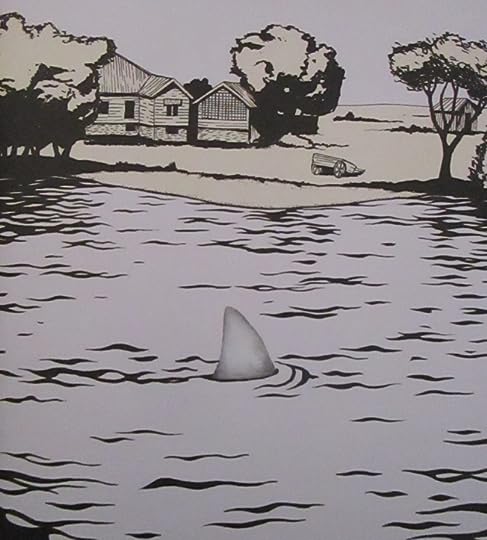 I run a hand over the sandpaper skin I’ve read about. Survivors find themselves grazed from it when the shark glides by.

this is a family memoir in graphic novel form by evie wyld, focusing on her childhood trips to visit relatives in australia and her lifelong fascination with sharks; their role in both her actual experiences and in the realm of her imagination.

the writing is beautiful:

It’s not the images that come first when I think of the parts of my childhood spent in Australia.

Or even the people. It’s the sounds

– the butcher birds and the magpies that lived amongst us on the back veranda.

And stronger still, the smells –

rich and rude and sickly strong.

Most of all, the river, muddy and lined with mangrove.

at low tide the black mud that smelled bad,

that had stingray burrows hollowed out in it.

The smell I associate with the smell of sharks.

the artwork is also stunning – a combination of cartoon and hyper-realistic pencil drawings which are perfect complements to the text. 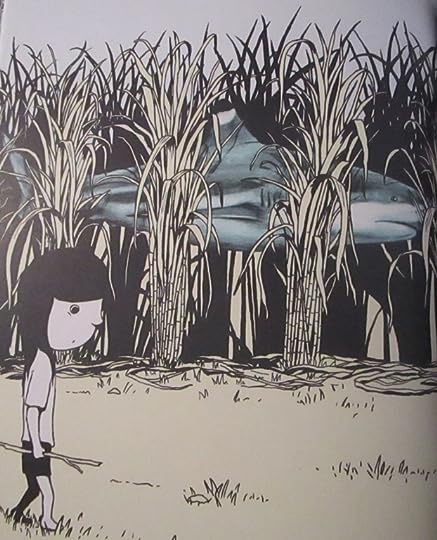 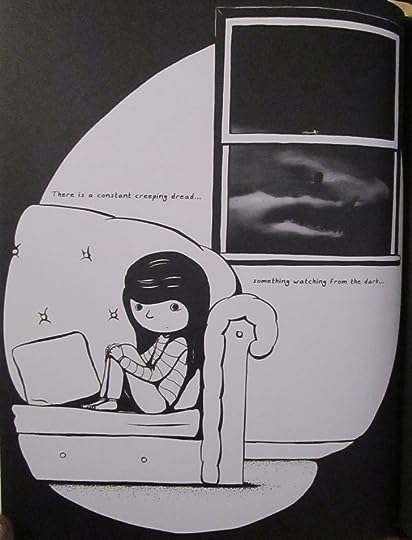 even the endpapers are fantastic: 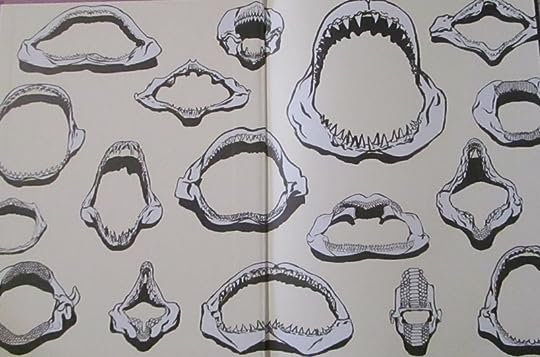 the story itself is fairly quiet. this isn’t a bleak memoir about childhood trauma or life-changing circumstances; it’s more like a series of snapshots of small memories – some good, some bad, muted by life-distance, and riddled with sharks.

sharks are everywhere in this book and they represent both an alluring magnetism and an embodiment of her fears. she is enthralled by the stories her australian family, fishermen by trade, recount about attacks and near-misses, but she also imagines her parents and brother being eaten by sharks. If I think the worst, then the worst is unlikely to happen.

sharks are also fun at parties 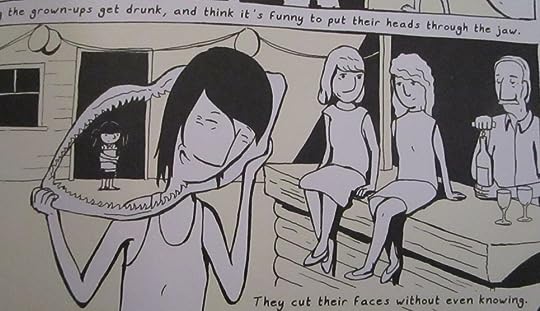 Rodney Fox, I fall for you at six years old.

I see right inside your viscera and you tell me about surviving. I read about how your abdomen was opened
and all your ribs broken. Your diaphragm punctured,
lung ripped open, shoulder blade pierced,
spleen uncovered.
The main artery from your heart exposed.
The tendons in your hand all cut…
and how the shark left behind a tooth,
still stuck in your wrist.
I see the before photograph, impossible red
sausages stuffed into an empty carcass,
the white skin tender, swollen and peeling away.
And I see the after photograph, the horsehair
stitches, that make a perfect semi-circle from
shoulder to ribs – a cartoon apple bite.
And your face: salty eyes,
strong bone in your nose.
An expression that said
the whole thing was just fine.
Stuck in the mouth, wrestling your thumbs into its eyes till it lets go,
and you feel yourself loose in your skin suit.
The shark is gone and people are nudging your guts back inside,
and when you wake again it hasn’t changed your face.
It is all fine.

I solemnly understand you to be the greatest living man. 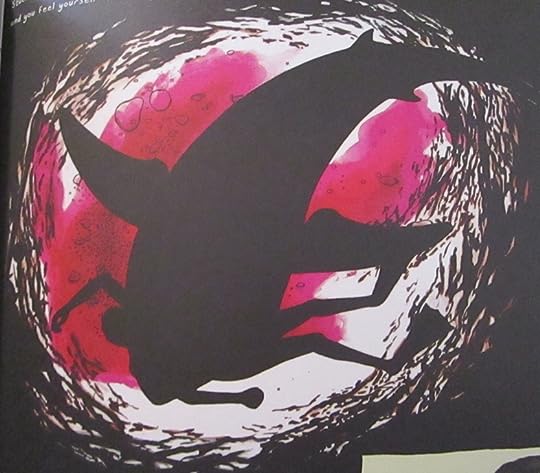 later, visiting a shark museum, she recognizes him just by a photo of his spleen, which is the truest test of devotion and intimacy.

she also, while watching Jaws, finds other men who appeal to her: I like the moustache on Quint, and the beard on Hooper.

when she’s home in england, she regales her school-bullied brother with stories of sharks to distract him from his sadness, and has fantasies of shark attacks where no shark attack outside of a syfy movie could be.

incidentally – this image is actually from ghost shark, one of the best syfy shark movies

sharks stand in for that nameless dread permeating childhood – for all of the situations you don’t understand, for the feeling that something bad could happen at any moment, sharks are the boogeyman embodying all of life’s anxieties, lurking in the most unexpected places. 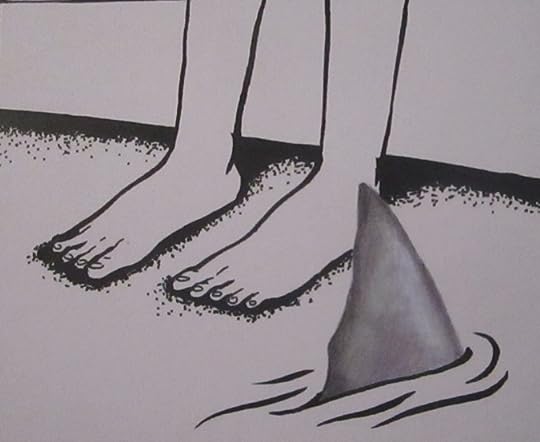 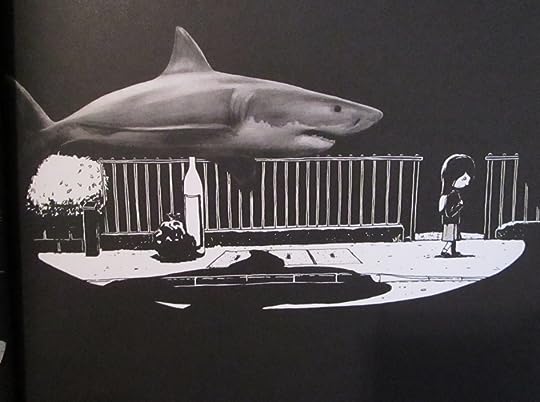 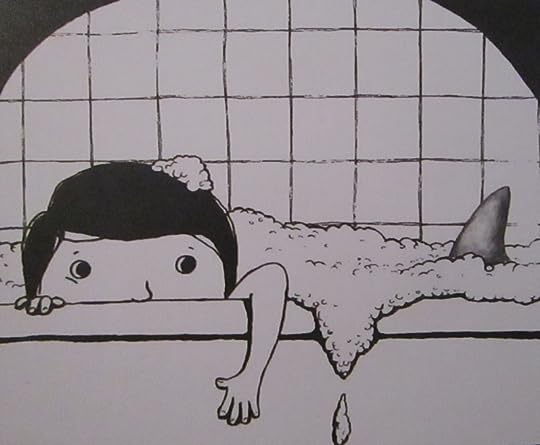 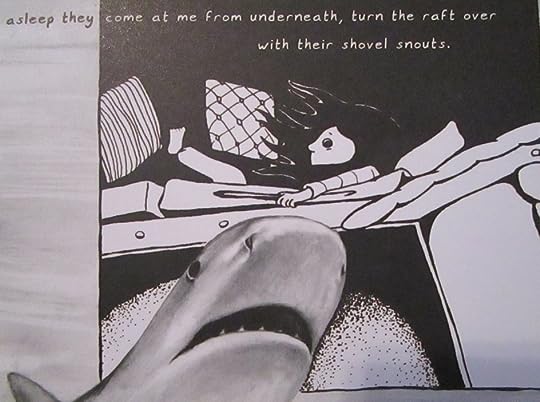 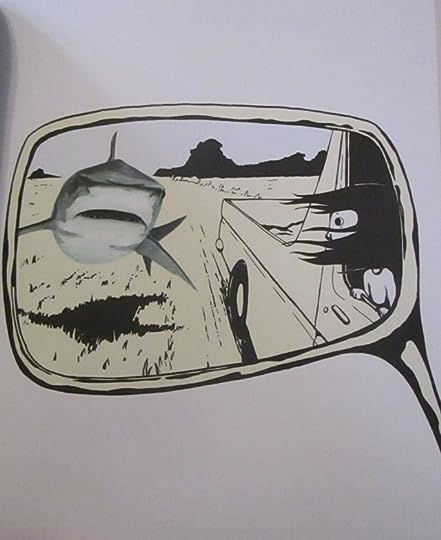 but they aren’t just manifestations of her fears, they also inspire awe and respect, as the majestic but misunderstood creatures they are. when she is taken to “Vic Hislop’s Killer Shark Show,” by her father, featuring the attraction of “Conan the Record Breaking White Pointer,” she is excited, wanting to be there for feeding time, imagining:

Great hunks of raw meat,
bellowing gops of blood against the bone-white teeth.

but it turns out to be a cheap and sordid spectacle, featuring sacking-cloth sharks, a video in which vic hislop himself characterizes sharks as “killing machines with a taste for human flesh,” posing triumphantly with the corpses of sharks, cutting them open to reveal their insides, and a photo of rodney fox’s spleen, “but there are no after photographs with your smiling face,” which reduces him to a victim instead of a survivor. worst of all is conan, for whom there will be no more gops of blood. instead, his seventeen-foot corpse is suspended in a tank of nauseatingly dirty water, undignified, skin flaking away.

and while many of the images of sharks are sad – hauled out of the water and killed by her relatives, cut open to reveal their young (taking “two puppies back home for frying”), 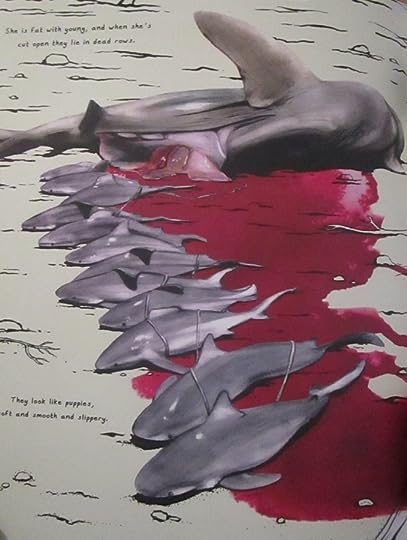 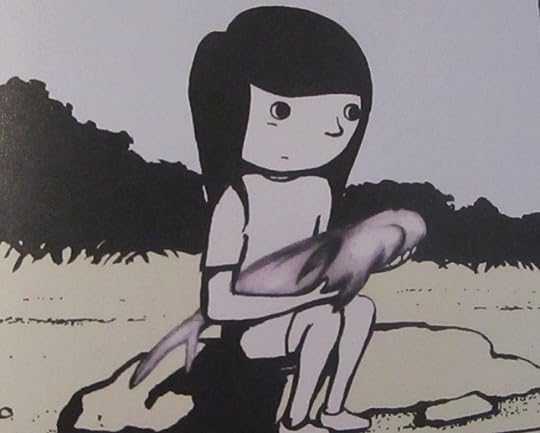 or definned and rolled unceremoniously, wastefully, back into the water, or left to thrash and wear herself out and die, it’s never preachy, just memories of things that happened.

one more reminder for me to never go to australia: 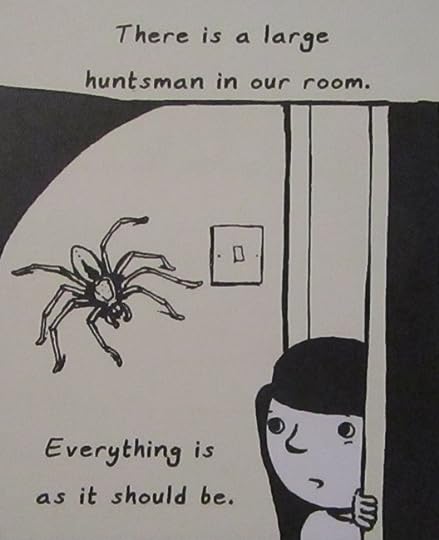