An Explorer’s Cartography of Already Settled Lands by Fran Wilde
My rating: 3/5 cats

You measured and cut so all the maps fit together. You laughed and forgot, and teased and remembered, and you grew so big you defined the entire world.

if you’ve been reading any of my flailing attempts at book-reviewing lately, you’ve already heard me complaining about how frustrated i am by the inverse relationship between the length of my self-quarantine and the length of my attention span.

this story was not a good choice for karen-tine.

there is some undeniably lovely writing here; delicately turnt phrases and an evocative lyrical atmosphere, but right now i got a bunch of slippery noodles where my brain should be, and the story, its message, even its shape—i was more perplexed than anything else. it leads off strong with a ship’s arrival upon an unfamiliar shore—dropping expository backstory to establish past events, and suggesting a future course of action.

and then there are a series of short prose chunks that are sort of journal entries chronicling the exploration/anthropological impressions of the region, but soon become less strictly observational as the segments begin to feature the navigator who is presumably writing these as they assimilate over an unknown but significant period of time, and i’m not really sure if this dialogue is meant to be written or if we’ve moved away from the initial conceit and if we have, why are they still marked off in these entry-sized chonks, with separate, additional narrative chonks and why do we need both and what’s the difference and to whom are the dramatically italicized tagline-sounding sentences addressed and again, i’m not the sharpest needle in the haystack these days, but the transitions were unclear to me long before You come into it.

it’s my fault—i was disengaged early on. when the first set of ‘journal entries’ began, they read like a series of imagery-heavy magical realism flash fiction pieces and i’m not in a place where i can *do* abstractions right now.

The Salt Maps and the Blood Maps

The salt maps of the people who live by the brackish river are carved into the cliff walls, a history of people who hunger for the taste of the long-forgotten sea. Each layer of the map digs the river’s embankment deeper. The river, which once ran smoothly from the mountains to the sea, now crashes and falls from a great height and runs along the map’s edge until it disappears underground.

At one layer, less than a third of the way down, the salt maps run pink. There, a people to the east of the brackish river had ventured near and carved their own maps on the skins of their neighbors. But they’d found the water sour and left, and those few who had hidden within the carved salt walls of their history began to emerge again, and dig the river deeper, and wider still.

loses me halfway through the first paragraph because THE BRAIN IS JUST NOODLES.

but i thought i’d gotten a handle on it—that this was going to be a story comprised of journal entries about the region’s inhabitants—disconnected bits of pretty poetic fluff without narrative. i’d resigned myself to the likelihood that i’d be re-reading sentences several times without the anchor of action or character or plot to keep me invested, but then when it started deviating from this initial structure, i got even more bewildered, and while there were some effective passages with sad-pretty-achy writing, i didn’t *get* it as a story.

welcome to olive garden. i’ll be your meal today. 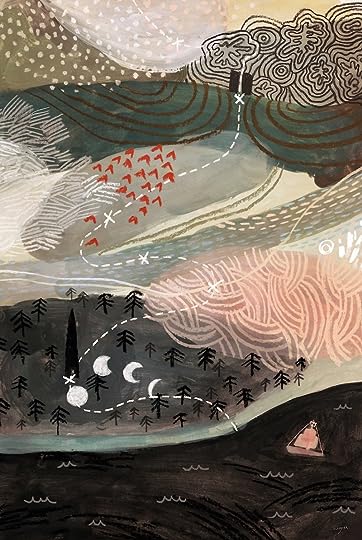