A Boy and His Dog at the End of the World by C.A. Fletcher
My rating: 4/5 cats

i have never seen this on an arc before: 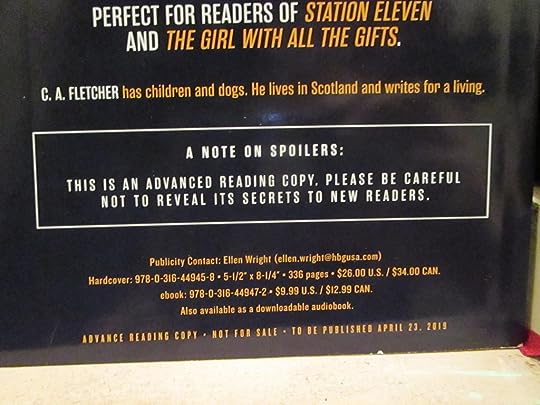 usually, i am very mindful to avoid potential spoilers in reviews of ARCs.

BUT THIS EXPLICIT, POLITELY-WORDED REQUEST MAKES ME FEEL SO MISCHIEVOUS! THERE IS NAUGHTINESS STIRRING WITHIN ME!! WHAT WILL HAPPEN???

THIS IS WHAT WILL HAPPEN

i’ll write a general review first, for the booknerds, and then i want to say a few words about SEEEKRITS which will not be the giving away of seeekrits, but more of a slurry of thoughts about ‘em, which may or may not be interesting or useful or even a smart use of my time.

this is a solid post-slowpocalypse novel, in which humanity has dwindled down to nearly nothing after all but 0.0001% of the population underwent the Gelding – an epidemic of sterility/barrenness of unknown origin. those who have managed to survive see few, if any, humans outside of their immediate family over their lifetimes, knowing only what that family knows about the larger world.

this is certainly the case for griz’s family: teenage griz, siblings ferg and bar, their parents and their two dogs jip and jess. they are further isolated by living on an island off the coast of former-scotland, with only one other family within sailing-distance, getting by through scavenging and farming, and certainly having suffered their own losses along the way.

and then a man arrives on their shores – brand is tall and charismatic, a vikinglike adventurer with stories of his travels and a ship full of treasures to trade – who charms his way into their hearth and home and then takes off in the night with jess, a beloved family pet but also a valuable commodity; female dogs being nearly as rare as fertile humans.

and griz is just not gonna stand for that, setting off into the unknown with jip to get jess back, completely unprepared for the threats and truths of the world beyond those islands.

it’s a good contribution to the post-apoc genre, and i love that griz is a total booknerd whose favorite thing to read is…books about apocalypses and dystopias; because it’s always interesting to see what the Before thought the After would be like, and i love how many aftermath books survived the aftermath for griz to read.

the situation is inventive, the voice is appealing and a believable combination of knowledgable and innocent. there’s a thoughtfulness in the character’s worldview that i very much enjoyed — ordinarily i get frustrated with… pacifism, i guess i’ll call it, in aftermath lit, because once the world ends and all that’s left are predators and prey, you’d better adjust right quick because nature won’t coddle things that don’t fight back. those things are called “food.” but while griz’s reluctance to fight is naive, I didn’t want this story to end with a fight. I just wanted my dog, it makes sense given the circumstances – with so few people left in the world, it seems wasteful to kill any of ‘em. but me personally – you steal my dog, apocalypse or not, you best run fast and far ‘cuz i will fight back.

it’s not a very long book, but there’s a lot packed into it – backstory, currentstory, coming-of-age musings, action sequences and even WOLVES! the pacing is also really fast even when there aren’t action sequences, because this is one of those books that likes to hint forward – i thing i know i have lambasted before (The Known World &etc), but this book does it well, and it makes you want to keep turning the pages to find out what those hints are foreshadowing.

it is a very good book. this huge, nearly empty world is beautifully realized, with equal parts dark and light, ultimately optimistic, with definite sequel potential.

SLURRY OF THOUGHTS ABOUT SEEEKRITS:

that warning, though. this is We Were Liars all over again.

if you tell me there are SEEEKRITS, then i will know that there are SEEEKRITS and i will most likely figure out your SEEEKRITS before you want me to. which i did, in this case. now, thankfully, this book is way better than We Were Liars and is more than *just* its twist, but once i clocked it, i couldn’t help but wonder if the book really even needed this extra move, and the whole time i was in that readingspace of knowing what without knowing why, i was apprehensive about whether this was twist for twist’s sake or whether there was going to be a good reason for it.

i’m on the fence about it. sometimes a twist changes everything for the viewer*, forcing you to think back over and reinterpret everything you were shown through the filter of this new information: it was eeeeearth all alooong, he was deeeeead the whole tiiiiiime, yadda. and sometimes the twist only really changes things for the characters – i am your faaaaather, these are not the genitals you were expeeeecting, etc. here it doesn’t really do… either. it’s less of a twist and more of a fact. there’s a reason for the secrecy, but it doesn’t change the way you read the book— the consequences would have been the consequences with or without springing it on the reader in this way. all of this is just me being fascinated by authorial choices in general – benefits of choosing first-person over third, chapter titles v numbered chapters, basic structural decisions interest this brain ‘o mine. and maybe the point here is just that – an extratextual point being made about how little it matters. i am being cagey here, because i was so ordered, but yeah – i don’t know why the THING was a THING, but i do know that no one should ever announce that there will be a THING if they want people to be surprised by a THING.

* i’m using films because there’s a larger body of commonly-known twists to work with. apologies if i’ve just spoiled the empire strikes back for anyone.