i’m so glad i’d already discovered rich larson through his free tor shorts before this book came out. i LOVED two of them (Our King and His Court: A Tor.com Original and Meat And Salt And Sparks), and the third, Dark Warm Heart, was only just fine, but as a wise man said, 2 outta 3 ain’t bad, and larson went onto my radar as a new author for me to look out for. more importantly, the fact that i had five-starred catted him twice meant that even though neither the cover nor the synopsis of this, his debut novel, called out to me at all, i trusted he would find a way to make an alien invasion story arc interest me.

i’ve explained/confessed/apologized for the fact that i’m not a sci-fi girl many times before. aliens, intergalactic warfare, spaceships – none of those milkshakes are bringing me to the yard. fortunately, once i actually sat down with Annex, i found that the aliens were more of a secondary focus, and the primary concern was with the human characters – the ways they cope with life in the aftermath of an event, the specifics of which just happen to be shaped like aliens this time.

this was a one-day read for me, smack dab in the middle of my vacation, so if i get any of the storybits wrong, please forgive me. although everything you need to know is really right there in that sentence: “one-day read” and “on vacation.” i did not want to put this down, tearing through it like a tornado made of gusto.

so – a giant alien craft appears above an unnamed (i believe) city, cutting it off from its surroundings with magical alien fog. everyone older than 16 has been incapacitated, neck-clamped and set on autopilot, and most of the children have been rounded up and warehoused, implanted with a kind of parasite. there are floating whirlybirds and wormy membrane thingies, and if any kids escape the warehouses, it triggers the release of a different creature, an othermother, which is like a giant creepy monster version of yo momma that knows everything about you and you’re basically forced to kill the thing you love, over and over, in order to stay free. (that all sounds whack-a-doo, but it’s better when he says it).

some kids have escaped and remained free, forming a ragtag and affectionate mini-society in an abandoned movie theater they call neverland, they call themselves “the lost boys” in the peter pan way, obvs, not the “you’re eating maggots, michael, how do they taste?” way.

wyatt is their sociopathic peter pan, adored and feared by those who know him best, violet is the fifteen-year-old post-apocalyptic trans girl version of wendy, fierce and nurturing – as ready to throw down against a monster as she is to bandage an under-eight’s skinned knee, and bo is a newcomer to the group – a eleven year old nigerien* immigrant who has seen some terrible shit already and is about to see a whole lot more. all he wants to do is rescue his sister lia from the warehouse in which she is being held, and the new tricks he’s learned about how to manipulate the parasite inside of him should help him do just that.

unfortunately, things are always gonna be more complicated than they seem.

there are two things here that hooked me: violet and gloom (insert capital-g there).

violet is a star, and this end-of-the-world situation suits her perfectly – not only is she finally able to become who she really is, raiding all the pharmacies for hormones without requiring parental consent, but she’s coming into herself in more than gender-related ways, overcoming past trauma and choosing the kind of woman she wants to be.

gloom (insert capital-g there) is my other favorite, but i will say little about him. he is not human, he is a saboteur, and i love him as much as i love aidan in the illuminae files series.

i’m curious to find out why this series is called “the violet wars,” since the pov is pretty well-distributed between the characters, but violet most certainly deserves to take the stage from the rest of ‘em, and any war she chooses to pursue is going to be one worth checking out.

this is an adult series, but there’s plenty of YA crossover appeal – good energy, strong themes, intriguing characters. bring on the next book! 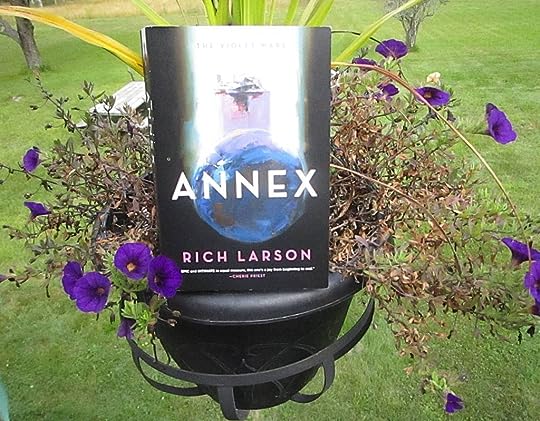