The Book of Dog by Lark Benobi
My rating: 4/5 cats

“Well that was something,” Stella said.

this is a very…contemporary satirical look at the run-up to a possible apocalyptic scenario that begins with the spread of a “Yellow Puff-Ball Mushroom Cloud,” which disrupts the weather before going on to overturn the order of the world, eventually turning people into different animals.

a pregnant teen is about to pop out the spawn of The Beast (and the fetus is very chatty), and a group of “unlikely,” “insignificant” women (or, once-women, now-animals) will be placed into position to prevent the full-on apocalypse from coming to pass:

”The undocumented and disabled. The forgotten ones. The left behinds. The last will be first. It’s our turn. All of you need to fight together, every which way you can, and then some, and then some more, and even after you do all that, you will probably fail, and then die.” 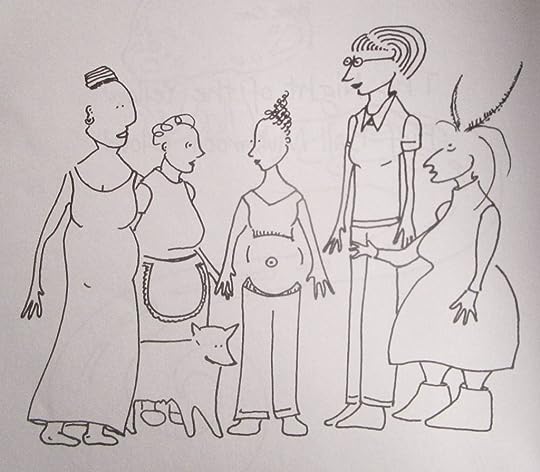 even though i’m not much for political fiction (reading is how i escape from all of the things in the world), it’s a broad-spectrum satire that encompasses not only today’s worrisome political sphere, but it also lassos in various aspects of the social, cultural, religious, personal and natural worlds for pointed commentary.

as far as political satires involving anthropomorphized animals, this one is a lot more rollicky fun than Animal Farm and has more pig latin than actual pigs.

there’s something—to me—a little freeing about turning into an animal, as long as you get to be a good one, like a bear. or one of these little creatures in a traveling pack of mischief pals: 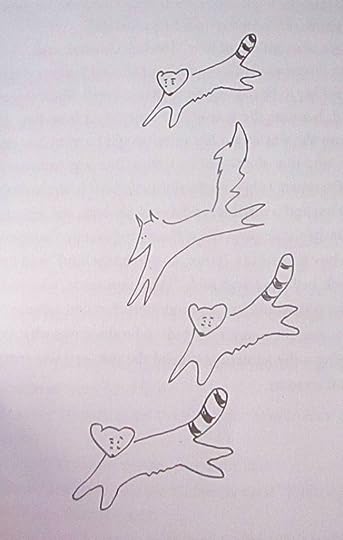 Just when both of Josefina Guzman’s feet were safely back on the ground, some shapes made their way out of the muck and reeds. The shapes were trotting toward her. Her eyes were bad and she thought they were dogs until they stopped right in front of her: a fox and three raccoons, traveling together. Their eyes glowed. They nodded their small animal heads wisely. Josefina Guzman half-expected them to speak. Next she wondered if they were rabid. She wasn’t sure whether to step toward them boldly to scare them off, or to run away. Before she could decide, the fox let out a cry that sounded like laughter and the four creatures ran away together into the dark.

“That’s right, scat, get out of here,” Josefina Guzman said.

But she felt disgruntled to be so easily dismissed by these creatures. Also it worried her to be talking out loud to animals.

later on, she turns into a goat, so the lesson here is, ‘don’t worry about looking crazy, because crazy things happen all the time.’ lesson two is ‘please don’t ever let me turn into a goat.’ i wanna be something chubby and fuzzy with big eyes and clever hands. lesson three is ‘read this book if you want to feel hopeful about how even marginalized, habitually overlooked people can overcome impossible odds by working together. even if they are goats.’