What Stands in a Storm: Three Days in the Worst Superstorm to Hit the South’s Tornado Alley by Kim Cross
My rating: 4/5 cats

The boy pointed at a tree branch drifting down from the sky, featherlike. What looked like a twig grew into a limb. In a blink, it became a full-sized tree hurtling directly toward them. As it hit the ground nearby, green lightning spidered out of the clouds and seized it like a hand.

even without sharks in them, tornadoes are terrifying

this book covers the superstorm event of 2011 in which 358 tornadoes occurred over a three-day period. 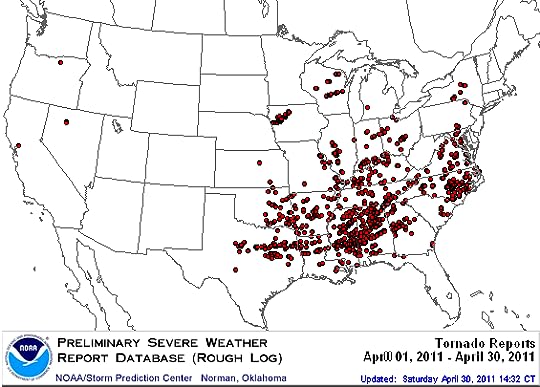 the storms spread out over twenty-one states, but this book’s focus is on alabama (where 252 people died) and parts of mississippi, using interviews, facebook posts, emails, and news reports to reconstruct the devastating event. the story contains accounts from survivors, the families of the deceased, meteorologists, emt workers and doctors, storm chasers, and the heartbreaking internet posts of the dead which remain online, outlasting their authors. it is both comprehensive and immediate – a genuine nail-biter – as the tornadoes approach, destroy, pause, and resume – sometimes five at a time.

i am terrified of tornadoes. which is why i read this book. i am also terrified of volcanoes and earthquakes. i am grateful to live in a region where these giant natural forces are uncommon, and it is mind-boggling to read the nearly blasé reactions expressed at the beginning of this book by individuals so accustomed to tornadoes and so used to experiencing false alarms that they barely even react to the warnings:

Smithville’s tornado siren, an ear-splitting 50 feet from Patti’s house, had been screaming so often this spring that she found herself sleeping through the warnings.

When the sirens screamed she sighed and joined her colleagues in the stairwell, stopping by the coffee pot on the way to pour another cup.

now, i completely understand that repetition dulls alarm, and that after several false warnings, a person can overcome their natural instincts of terrified awe, but not me. first hint of an alarm, and i am in my custom-made bomb shelter with my hands over my ears. true story: when i was 6 or so, there was a hurricane warning, and i overreacted because – 6 – and i spent HOURS toting all my beloved stuffed animals and toys down to the basement. that i was able to do this for hours points to how very unmonitored i was as a child, but i was very cross indeed when i was finally discovered and made to bring everything back up. “but mommy, my yooooonicorns!!” i am pretty much still like this when i think about tornadoes and such. false alarms or no, if i lived in tornado country (and i would NOT), i would be in the basement with my yoonicorns at the first peal of a car alarm. and a mobile home?? that’s just hubris, man.

but the book discusses the danger of false warnings in the way they decrease that respectful fear, and explains why false alarms are so common:

In an age when we can map the human genome, gather dust from a comet hurtling through space, and engineer synthetic DNA, science cannot predict exactly when and where a tornado will form. A radar cannot “see” tornadoes. It can only detect conditions known to be present when they form, such as signs of strong rotation. And the presence of those radar features does not prove a tornado exists. The only way to confirm a tornado is for a human to lay eyes on it.

good thing THAT’S not terrifying. but it’s why there are so many warnings that come to nothing. and why there is only an average 13-minute warning time.

this is a terrific book, and it’s very intense. it’s extensively researched, she’s a very clear and vivid writer, and even her organization is excellent; a great balance of heart-pounding action and factual material. and it was smart of her to choose to relay the information about “how does a tornado form?” by structuring it around an assembly where a beloved local meteorologist addresses a group of fifth-graders, which makes the science both comprehensible and also very lively.

this is the perfect book for fans of The Perfect Storm: A True Story of Men Against the Sea, Into Thin Air: A Personal Account of the Mt. Everest Disaster, Isaac’s Storm: A Man, a Time, and the Deadliest Hurricane in History, The Children’s Blizzard – any of those narrative nonfiction books about natural disasters or other survival stories featuring people much tougher than i am:

The tornado had ripped off his jeans and his shirt, had stolen his watch and his glasses. A 3-inch shard of wood pierced the tender arch of one foot, and blood was pooling beneath it. A Bic pen was impaled in the flesh of his side. He wrapped his fingers around the pen and winced as he yanked it out.

and like all these stories about communities destroyed, in the aftermath of the storms come the accounts of altruism. of the healing and hope and the endurance of the human spirit and the way in which survivors and strangers both step up to help a community in need. and it manages to not be treacly about it. much.

at any rate, it is a gripping account of an unprecedented event, and it only reinforced my fear of tornadoes. i will be in my bunker if anyone needs me.