She went to slap him and he caught her wrist.

He hadn’t meant to hurt her. It was reflex, self-defense, a hand raised against a hand. But the moment his fingers met her skin, she screamed. He let go at once, but it was too late. The flesh had bubbled and burned, raised welts in the shape of his hand.

He tried to apologize, tried to explain, but he couldn’t make her understand. He didn’t understand.

i’d forgotten about this story! i’d bookmarked it as a potential december short story advent calendar-story last year since i’d finally read Vicious and wouldn’t be all adrift in this world but then i forgot all about it come advent-calendar-time, so it’s rather a good thing that there wasn’t a new tor shorty posted this week, allowing me the chance to rediscover it and get back into the spirit of the series.

silly of me, really, since TIL that this story was posted as a teaser before Vicious was released, so a familiarity with the world was not necessary. HOWEVER, i do believe this story is better to read AFTER Vicious, because it really is a tease—the character we are introduced to here does not appear in the book for REASONS, and all the sympathy schwab makes us feel towards him and his situation is for naught, a bait-and-switch serving as a means to introduce Vicious‘ real herovillain.

as a standalone, the ending is too abrupt and inconclusive to be satisfying, but if you know who this guy is, showing up at the end with his mumbo-jumbo, i reckon it’s a lot more rewarding.

i really need to read Vengeful before i forget the finer points of Vicious. that’s what i get for only writing an all-caps placeholder review for it; i don’t remember enough of the book’s connective tissue, so i hope one-a-you goodreaders did a more thorough job reviewing it than i did, because i’m going to need your beautiful brains! 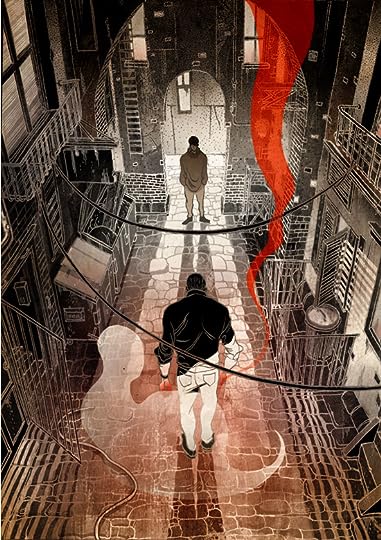