The Council of Animals by Nick McDonell
My rating: 3/5 cats

“It is better,” said the cat, “to accept what cannot be changed, and pee on it.”

brief personal backstory: i slap every book i’m even casually interested in on my ‘to-read’ shelf here, so whenever there’s a giveaway for one of them, i get that notification email, and i enter all of them, even if i can barely remember the book in question. despite the sheer number of giveaways i enter, unlike in the olden days when goodreads was a small family operation, i rarely win—this year, i have only won TWO, this one and The Memory Theater.

so i was SUPER excited to get the email telling me i had won a giveaway, but when i clicked through to see which book i’d won, i was more apprehensive than triumphant.

obviously, i was drawn to this book because animals! but the synopsis gave me paws pause. i could see this going one of two ways; either some treacly The Boy, the Mole, the Fox and the Horse pap, or an Animal Farm reboot. neither of those two options appealed to me—the first because goopy sentimentality is not my jam, the latter because you don’t mess with Animal Farm.

this ended up being closer in scope to Animal Farm, but on a simpler and more superficial level. which is not a criticism—it’s not trying to be a scathing political satire, it calls itself a fable and it delivers exactly what it promises.

so, a dog, a horse, a grizzly bear, a cat, a crow, and a baboon walk into a clearing. these representatives have assembled to discuss what to do about the human problem. if you don’t know what this problem is, read a paper. we broke the world. here, the world is even more broken: humans have caused an unspecified event known as The Calamity, and while only a few stragglers remain, humans nonetheless pose a threat—their potential to go forth and multiply and ruin everything all over again is a real concern, so the animals are taking it upon themselves to vote on a course of action: let the humans be or eat ’em all up.

you may notice that the species-representation is on the slim side, which highlights one of the problematic features of decision-making by committees, and this one has already experienced some challenges in establishing its quorum:

Each of the animals at the council was a species ambassador, chosen (some more democratically than others) by their fellows. It had been agreed that each would have an opportunity to speak before voting.

The order of speakers had been agreed at the previous meeting, after a venerable rabbit had been devoured over questions of procedure.

the baboon is the de facto leader of the council, and his attitude towards the proceedings seems pretty consistent with those in leadership positions:

“But if the others aren’t here,” said the bear, slowly, focusing on one bit of the problem, “how will they decide how to vote?”

“They vote as we tell them,” said the baboon. “Animals like that.”

this is only one of the reasons why committees, while noble in theory, are frequently doomed endeavors. this one in particular is plagued by the usual petty disagreements; infighting and vote-switching as each creature puts forth their arguments, and the process is further tainted by bribes, secret alliances, and some munching-on of furry bystanders wanting their own vote in the matter.

it’s not exactly a meeting of the best and brightest. the crow’s contributions are particularly unhelpful:

“Hear the bird laws! On the full moon, no worms! On the seventh day, attend thy nest! Thou shalt not fly above the mountain, nor below the sea! Caw Caw Caw!

and though you may have disagreed with me in the past about the Evil of birds, remember i tried to warn you.

“Humans are a danger to The Egg,” said the crow. “Kill them all!”

i was unsurprised that the crow was such a wing’ed monster, but i was pleasantly surprised to discover this wasn’t just an “animals good/humans bad” story because i tend to bristle at being spoonfed simplified morality.

it’s brief and quick (and illustrated!), probably a single-sitting gulp for most, and while i wouldn’t call it an essential read, it was occasionally clever and funny, and there are certainly some insights to be gleaned, and i am, naturally, team cat.

Though the crows and the baboons had, per the agreement at the council, spread the word about the decision to eat all the humans, no other species had massed with them. The original baboon emissary, whom we came to know earlier, was frustrated by this, but finally he decided it did not matter. He was certain the baboons would finish off the remaining humans. They didn’t need any other species’ help! And he, personally, would be certain to approach the battle from the rear. Plenty of idiot baboons to go ahead of him. He started a chant, to rile them up:

Other baboons joined in.

But why should it be?

Why, indeed, the historian would ask, are we continually surprised by the rapacity, violence, and arrogance of those creatures who ascend to leadership? Do we not recall, throughout animal history, the despots and fools who have so handily outnumbered the saints? History is a dark tail that doesn’t wag.

when the monkeys and the birds team up, we are all doomed. 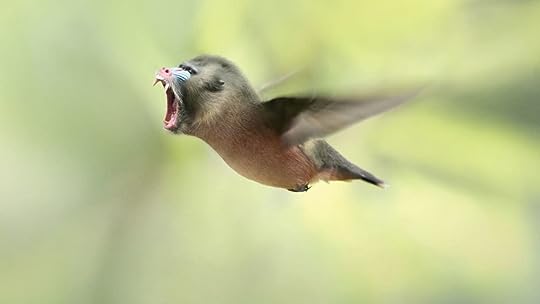 hooray, i won a book with animals on the cover!!!