Volk: A Novel of Radiant Abomination by David Nickle
My rating: 4/5 cats 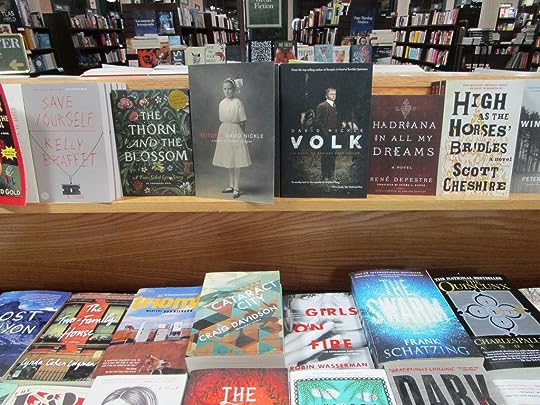 and if you look closely, you can see that greg’s fox table is still alive and kicking. FOXEN! 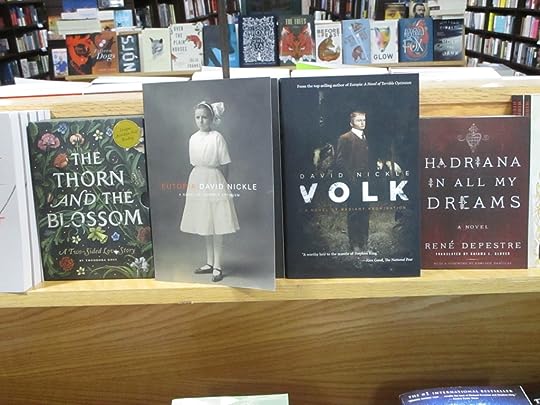 ”When was the last time you saw Molinare’s ghost?” asked Andrew.

Dominic set the cup down before Andrew.

“Just now,” he said. “Just a moment ago. He was at the bar, over there.” Dominic pointed to the far end of the bar, toward the Liberty’s street entrance. “He warned me, as he often does.”

if you read Eutopia: A Novel of Terrible Optimism and thought to yourself “i liked it, but it coulda used more nazis,” then you are in luck, friend! this sequel is LOADED with nazis! and, yes, since i know you are thinking about asking me—i do think you should read eutopia before reading this one. i was surprised (but thrilled) to learn about this sequel, but with six years of forgetting-time between the two books, i was concerned that i would be lost. fortunately, he does a really good job hitting the touchpoints of the first book, memory-refreshers that don’t come across as exposition-dumps. he also gets the reader up to date, bridging the timeline between where eutopia left us in 1911 and where this one picks up in 1931 with a few key moments. however, i do not think there’s enough in the refresher bits to catch a complete newbie up to speed. that’s not to say you can’t enjoy this as a standalone, but i think you will miss out on a lot if you try to be some kind of “i only read sequels” renegade.

this is the rat king of genre-blends—it’s science fiction, horror, and historical fiction, where historical personages like goebbels and that other guy coexist with familiar fictionals from eutopia as well as ghosts, jukes (which you will know to fear from having read eutopia), and the menacing new-to-the-scene orlok, whose taxonomy is…complicated. for now, just think of a combination of charles manson and drax – surrounded by naked and adoring hitler-jugend, bellowing “Joseph Goebbels is a man that I would not ever fuck” with a dave bautista belly laugh.

it’s only natural that a story with its roots in eugenics would become filled with nazis once it became era-appropriate, but it’s not the kind of nazi horror i’m used to, which is admittedly awesome, but a bit sillier. 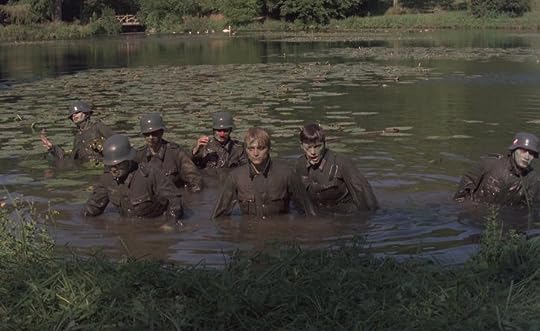 this is much more literary—the grown-up dark chocolate of horror writing where the historical detailing is as considered as the horror-bits and which highbrow manners you can pretty much tell from the titles; stiff and formal, invoking (involking?) brittle browned paper:

it’s not dry, just…respectable. although it’s true that the horror in this one is less front-and-center than in eutopia. there’s one really creepy scene, but for the most part, it’s closer to supernatural historical than true horror. whatever it is, it is a very good book, which you will discover when you come to it after having diligently read eutopia.

because you have been so well-behaved, you may read the prologue for free here:

I DID NOT KNOW THAT THIS SEQUEL WAS HAPPENING, AND NOW I CAN’T EVEN CONTAIN MY EXCITEMENT!!! WWWWOOOOOOOOOOOOOOOHHHHHHHH