i have decided to give this five stars after all, because i can’t really think of anything i didn’t like about it, but so many readers had so much less fun than me, i worry i will be cast outta goodreads for my opinion!

good thing i have a blog now.

i don’t mind that this book isn’t a horror novel. i wouldn’t classify either Black Mad Wheel or A House at the Bottom of a Lake as horror, so i didn’t have any hardwired genre expectations going into my fourth malerman.

as far as what it IS, well, it’s a dark fantasy/fairytale/western with some horror dustings that has a lot of fun subverting genre conventions. and if i ever had to make a tick-the-box wishlist of “things i like to read,” that’d be a pretty good start.

it reminded me a lot of Smonk, which is a kinda-sorta western that is so full of over-the-top, campy violence and general ickiness that it comes across more comedic than disturbing. the tone of the violence here is the same – it’s a rollicking book with the same quality to its violence as SMONK, although far less quantity.

Unbury Carol is essentially a sleeping beauty rework: carol has a condition that she has suffered with in secret her whole life – it’s a little bit like narcolepsy on steroids – in times of stress, she will fall into a sleeplike state so deep that it slows down all of her bodily functions – her pulse and breathing cannot be detected unless someone knows what to look for, and she appears to be dead, even though not only is she still alive, she’s not even truly asleep – she can hear what is going on around her paralyzed body, and what she experiences while she is under is a long slow fall through a place she calls howltown.

i’m not really clear why she has kept her condition a secret, except for the fact that it serves the narrative. the only people who knew were her mother (now deceased) her bestie john bowie (now deceased), her former lover james moxie (estranged) and her husband dwight. unfortunately for her, her husband dwight is a golddigging jerk tired of living in carol’s shadow and when she has a howltown spell following the death of john bowie, leaving dwight the only person alive (so he believes) who knows she’s not for-realsies dead, it becomes more lucrative for him to keep his mouth shut and get her buried ASAP.

what follows is a high-stakes race between several parties: dwight trying to get her in the ground, carol struggling to wake up before he succeeds, james moxie, now an outlaw legendary for a miraculous gunfight he once won in a town called abberstown, riding a dangerous trail to save a woman he hasn’t seen in years, unknowingly pursued by an assassin named smoke who has two oil-filled prosthetic legs made of tin and a head full of crazy.

i love the energy of this book, i love the episodic feel of the events and adventures along the trail, i love how “what happened in abberstown” is withheld time and again, in oh-so-pleasantly-frustrating ways. smudged to black, indeed.

but i must confess, even after the abberstown reveal, i still don’t understand it. i understand how the reenactment worked, but given the conditions of the original – time, witnesses, etc – i don’t understand how he pulled it off. magicians – wanna risk being cast outta the guild and tell me what’s what?

i had a ball with this one, and i read it in a day, breaking a long, disappointing streak of not being able to concentrate on books the way i used to. for that alone – reminding me that i enjoy reading – it gets five stars.

bonus glee – malerman’s notes in the pagehabit edition were great fun and full of plans and promises i hope he fulfills.

oh, man – that was so much fun! i’m bummed so many readers weren’t into it. but i loved it – i really needed something fun and feisty to cheer me up outta my glums, and this certainly helped. 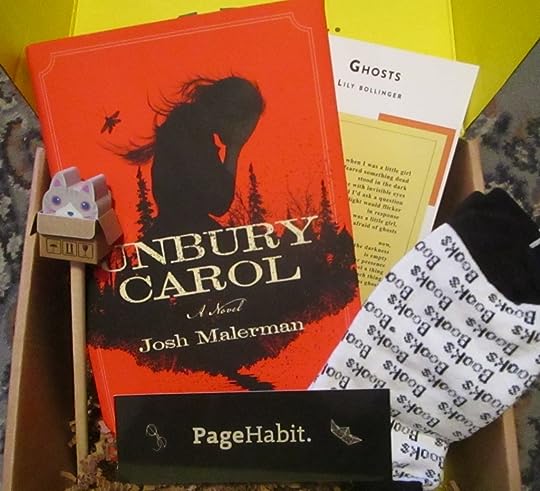 which means i really need to get cracking on mt. stackmore – i still haven’t read last month’s horror book yet. yeesh. but i am looking forward to this, and i love malerman’s little letter w/ doodles: 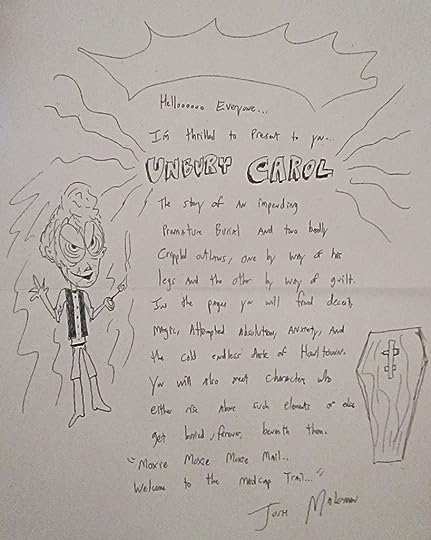 i’m also melting a little at this cat-eraser in a box. i may have wept a little.