The Meat Hunter by Megan Allen
My rating: 3/5 cats

this was a like-not-love book for me—i appreciated it more than i enjoyed it. it conveys its message effectively, it elicits a reaction from the reader, and the various storylines meld harmoniously, but i wasn’t crazy about the MC, and it’s not for those made squeamish by animal or grammatical violence.

for the gentles: even though it is a book about a lady-turnt-vigilante going around killing people because meat is murder, there is a lot of on-page animal cruelty, including some by the vigilante’s own hands, which means many readers who ordinarily would cheer for this kind of heroine either won’t be able to read it because of the animal-stuff or will be conflicted about her whole deal.

the writing has some iffy spots—there’s that tendency of people who are either over- or under-confident to choose the pompous “utilize” over the humble workhorse “use” and it clunks up what they’re trying to say. i don’t remember if she specifically uses “utilize;” that example is just my personal bugbear, and the foible isn’t rampant here, but whenever she tries for the fancy word, it’s slightly off.

those were just PSAs—neither of those things bothered me; my problem was with molly as a character. i need this space to work through my issues with her, and it’s probably going to come across as hypercritical and a little boring, so you don’t need to read it, but i do need to write it, for my own karen reasons. i did not hate the book at all, but the problems i did have with it really got under my skin. feel free to stop reading NOW, if you’re even still here.

hi. okay, so you know how to humbert humbert, Lolita is boinkable but to most readers, there’s nothing sexxy in nabokov’s descriptions of some sticky kid with dirty feet playing with her gum? the same kind of filter applies here. we’re sold this character as an irresistibly seductive femme fatale; and in physical appearance she fits the conventional bill—beautiful, blonde, and aloof; cutting a dramatic figure in her all-white outfits, using flirtation to get what she wants while remaining inscrutable and cold, hypnotizing every single man with her sexparts; none able to look away from her legs, her breasts, her lips…

but as far as what’s on the page, she comes across more like a parody of sensuality with this pathologically frenzied male-arm-stroking and male-collar adjusting and male-chest caressing and pouting and cooing and lip biting and constant touch touch touching, but there’s no finesse to any of it. it’s compulsive rather than controlled so it reads more like a tic than a tactic; a nicholas cage fembot on ecstasy.

*dawning realization has entered the chat*

*dawning realization has left the chat*

molly half-asses her own psychological landscape:

She had learned long ago how easy it was to disarm a man, leaving him dazed and babbling and giving Molly time to formulate a plan that would lead to his ultimate demise. She supposed it was because life had damaged her enough to closet her own feelings, tuck them away, allowing her to focus on wit and irresistible external features which could subdue nearly every man she encountered.

Women she had met over the years were not as taken, not as captivated and not as kind, often apt to assess her as cold, even calculating, with more than one elevating that assessment to exalt, “What a bitch,” whenever Molly walked away.

but the thing is, they’re not wrong, and that’s what makes molly such a difficult character to root for. she’s not likable, and it’s not because she’s a murderess, and it’s not even because she kills or endangers more than a few animals which seems counterintuitive and hypocritical but reasons. it’s because she’s just…shitty to people. unprovoked low-key shittiness. to men and women, to people suspicious of and investigating her (where a little of that sugar she lays all over her victims would be strategically advisable), even to people she should consider allies, like carl—her only friend. as a gay man, he’s immune to her charms, but their relationship is basically a hate crime—she hits him in the balls, yanks on his hair, showers him with verbal abuse etc etc, while he comes across like he’s got stockholm syndrome.

…he had come to love Molly, and need her, like no one he had ever allowed into his life before. It wasn’t so much that he allowed her there, as that she had inserted herself without regard for his opinion on the matter.

we’re assured she’s got people and their motivations all figured out, including her ownself, but she’s a person lacking in compassion and empathy murdering people for…lacking compassion and empathy. case in point: the end result of what she considers to be a compassionate act is that a little boy is going to wake up beside the corpse of an animal he loves. this is exactly the kind of misguided tenderness that inspired my babysitter serve me my favorite of her “pet” rabbits for lunch when i was four. read the room, molly!

she’s unsympathetic and inconsistent, every interaction is a power play, no matter how minuscule the stakes, she’s a frankenstein’s monster of conflicting personas who’s self-deluded even by serial killer standards and if she heard me saying any of this she would think i was just jelly like allllll women are of her, but she is smug and rude, so there.

this is the scene that made me blow my top a little:

It was Tuesday night at Lola’s. Ladies night. Molly especially enjoyed Tuesdays, not because she felt more secure strolling into an environment where an abundance of women would offer her some anonymity, but because she enjoyed the sexual tension brought about by an excess of women in a bar usually filled with men. Walking up to the bar, she knew a hundred pairs of male eyes were feasting on her, pining for her attention, while at the same time a hundred pairs of female eyes shined bright with the hope that she would trip and fall on her face. This amused her. Carl often referred to her as an attention whore, and she supposed that was as close to a fitting description as one could get.

The barroom was crowded, as it usually was on Tuesdays. She squeezed her way in between two men at the bar, then turned to the one on her left. “My seat,” she said, reaching out with one hand to remove the Stetson from the man’s head, while the other brushed its way affectionately through his hair. The man surrendered his seat without protest, also happily surrendering his hat which Molly placed on her own head, tilting it back to showcase the mass of blonde curls that swept out from beneath the brim. She turned to the second man, who swung himself around enough so their knees interlocked, with one of Molly’s legs reaching out to caress the man’s thigh. “Vodka, rocks,” she said to the man, whose hand went immediately into the air as a signal to the bartender.

then she drags them both onto the dance floor, where other men flock to grind and caress her (another thing she finds “amusing,” which is such an asshole of a word) and she encourages them all, “feed(ing) their hunger,” and then:

Sometime after midnight Molly broke away. She walked over to a young man who had been assigned to guard her purse, kissing him lightly on the lips in thanks. The man blushed, his mundane night composed of standing on the sidelines watching her dance having just become a spectacular one.

this is the first we are hearing of the purse-guarding gentleman, but the whole scene, the whole night in the bar—does anything like that ever happen outside of a madonna video? this faux-empowerment gained by flirtation, instantly turning men into drooling servants, no competition between them, no expectations of her, content to have orbited her for a time and certainly not following her out of the bar, hoping for more, cuz that would have gotten in the way of the thing that needed to happen in the parking lot, but this sudden abandonment of the pursuit of her apparently irresistible bod makes it seem like these men are part of chuck e cheese’s animatronic band unable to cross the threshold.

that scene pissed me off for its sheer silliness and i could not get it out of my mind for the rest of the book so i had to write about it here to get it out of me. and now i am free.

except for hating molly immensely, i liked a lot of the book, especially the john grimm storyline.

in any case, three months of quarantine has broken my brain, so don’t listen to me, booknerds! tend your own reading paths! 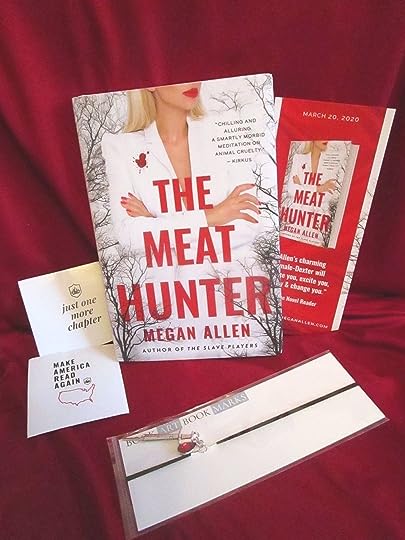 as much as i love my hypodermic needle/blood droplet bookmark: 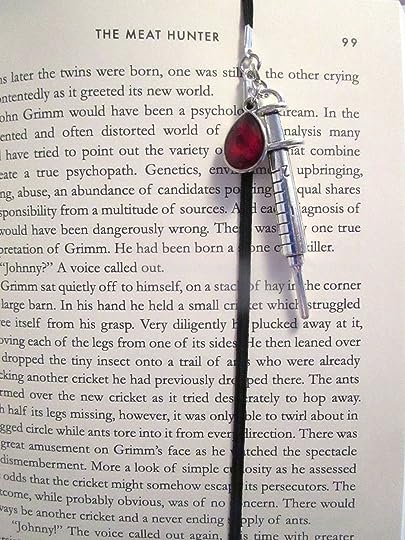 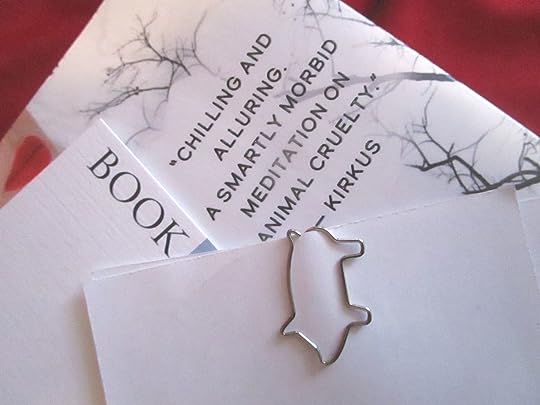 and this secret shiny bloodstain under the dust jacket!