The Book of Grief and Hamburgers by Stuart Ross
My rating: 5/5 cats

What is grief? Is this grief?

i picked this book up on the first day of april, thinking it would be a fine way to celebrate the start of national poetry month.

turns out, it was a fine way to celebrate april fool’s day, because this is not a poetry collection.

i don’t know why i assumed this was poetry. i have read five other books by stuart ross, and only two of them have been poetry, but his prose always seems filtered through a poetic sensibility, emphasizing cadence and imagery and even the way he lays it out on the page is verse-shaped: 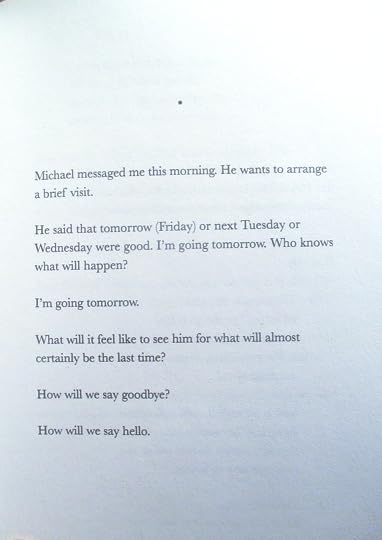 or maybe that’s all just the rationalization of an april fool.

i also don’t know why i thought it was such a great idea to read a book about grief so close to my own personal grief-anniversary, but decisions were made, tears were shed, and here we are.

this book is short enough that it can be read in one little sitting, but that’s not to say it ought to be read that way—quite the contrary.

it’s sad and beautiful and meditative, and it needs time to work its way into your soft little feeling bits, the way sand niggles at an oysterbody with, “why are you crying? why are you crying?” until the oyster suffocates all that emotional shit into an impenetrable pearl and gets on with its life.

not a great analogy, but a decent life lesson.

anyway, grief. death has taken a lot of stuart ross‘ people: family, friends, mentors, dogs, and even though writers are meant to take all the universal experiences of life and distill them into art, stu has some emotional roadblocks when it comes to the experience of grief.

the premise of this collection of…essays? prose poetry? thoughts? is that stuart ross—the affable canadian vegetarian poet—has an unusual writer-tic: whenever his work skews too close to something uncomfortable or “heavy,” a hamburger is sure to find its way into the mix.

here, hamburgers are code for grief, and, as he tries—repeatedly—to wrap words around his “enormous accumulation of loss,” inevitably he veers off into a hamburgery tangent.

It may be that I have grieved and grieved, but I did not recognize it because I don’t know what grief is. I have felt pain in my chest and at the same time an unfulfillable longing. Tears have trickled down my cheeks. I am a man of sixty-one and tears often trickle down my cheeks. I sob and curse.

I don’t know if this is anger or frustration or sadness. I don’t know if it is sadness, the degree of sadness that reaches the depths that people identify as “grief.”

Do you like pickles on your hamburger? Mayo? I’ve got some grainy mustard in the fridge. Pull up a chair.

it should be jarring, the incongruous image of a hamburger defusing the emotional tension with comic relief, pulling back to keep grief at arm’s length, but once you internalize the subtext, the hamburgers become, somehow, even more emotionally resonant.

this collection is a series of digressive memories, ruminations, anecdotes, but they keep coming back to hamburgers, and he keeps finding clever and affecting ways to talk about grief without talking about grief.

in one piece, he revisits a poem he wrote nearly two decades ago, whose narrator is a hamburger. he’s going through and critiquing it and it isn’t until the closing lines that he remembers what the poem is about.

It’s the only thing I’ve ever written about 9/11. And it is jam-packed with hamburgers.

but it’s not all hamburgers and suppressing the painful examinations of loss, it’s also full of wisdom:

Michael, I worry that I am too tired from grieving to grieve for you too.

But at the same time, I don’t even know if I have grieved. I still can’t figure out exactly what grieving is. Maybe because it’s a thing that doesn’t seem to ever end. If I grieved right, wouldn’t it end? If it’s a constant state, isn’t it just living?

reading this while feeling hyper-vulnerable by my own calendar-reminder of loss was therapeutic and reassuring, and it left me feeling a little scoured afterwards.

for someone who isn’t sure they’ve ever truly experienced grief, this book pulsates with it.

in these pages, we are confronted by the unexpected pathos in a stapler. i think the first time i cried whilst reading this book was the last sentence of page 18. it’s not even a sad line—it wraps up an almost entirely factual piece about c.s. lewis, but it’s the buildup to that line, the tonal shock as ross shifts the reader back into the place where his grief lives with five emphatically neutral words that could have been taken from lewis’ wikipedia page, but are—when contextually connected to what seemed like a non sequitur on the previous page—absolutely fucking devastating.

i mean, but that’s grief, innit? you’re going about your life, doing something completely ordinary, when suddenly something resonates, twanging a memory or a mood, and you’re caught off guard and left absolutely walloped.

there are several interstitial bits in-between the longer pieces—poems (his own and others’—take THAT, poetry month! i have honored you after all!), fragments of song lyrics or the last words of famous people with the word “hamburger” inserted somewhere, and, in an admirably determined stalling tactic (game recognizes game/staller recognizes staller), searching for the word “hamburger” in other people’s work.

To search for a single word in a physical book is time-consuming. If you recall the particular word, you may remember that it appeared, for example, in the top third of a left-hand page somewhere in the first half of the book. But with electronic books, you can just do a search.

The word hamburger does not appear in A Grief Observed.

The word burger does not appear in A Grief Observed.

C.S. Lewis does not veer from his subject matter; he does not hide or evade. There are no hamburgers, culinary or metaphorical, in his book A Grief Observed.

As I write these words, I wonder when I will turn unflinchingly to my own grief in this book. That is the particular corner I am trying to paint myself into. But I worry that I may be too clever for myself. Or too weak.

it’s the kind of book you can pick up and revisit—and i already have—rereading a passage here and there. it’s moving, elegiac, and deeply sad, but it’s also a comfort, and i hope that writing it was a comfort to him, too.

This book feels like one big hamburger. My intention was to make myself face things I don’t think I’ve succeeding in facing…I want to force myself to come to terms. That’s what I’m trying to do here.

Won’t you please join me?