Taken By The Gay Unicorn Biker by Chuck Tingle

this is one of his earliest stories, so i can write it off as a necessary learning curve, before he really let loose with the weirdness and let his freak flag fly, but man, is it ever boring.

there are a million typos, and not the fun kind, and there’s this belabored attempt at coherent storytelling that i find a turnoff in my tingles.

it’s not without its charms – the unicorn biker is named kirk, for instance, which is pretty adorable, and there’s some reasonably cute banter:

“You’re pretty cool, you know that?”  I say to the unicorn.

Kirk cracks a smile and nods to himself. “I suppose I’m alright.”

and then they cut to the chase:

“You ever fucked a unicorn?”  Kirk asks me suddenly.

I can immediately sense a change in his tone, a new direction in his unicorn mannerisms all the way down to the way the he turns his large beastly head to speak to me.

“I didn’t even realize you existed.” I confess.

but the sexual acts themselves are pretty vanilla, considering that it is taking place between a man and a majestic unicorn, whose horn does not come into play even once. i mean, why bother writing uniporn if you’re not gonna utilize the thing that makes it special and magical? just write horseporn and call it a day.

the only other charming thing in this story is this scene that occurs when mario takes kirk to his brother’s wedding in vegas:

I watch from afar as my father hoots and hollers, riding my new boyfriend around the banquet hall as the rest of the wedding party looks on in amazement.

other than that, this story is kind of a bust, and does not even come close to the genius of tingle’s later achievements in smut. if you’re looking for uniporn, try this one instead. 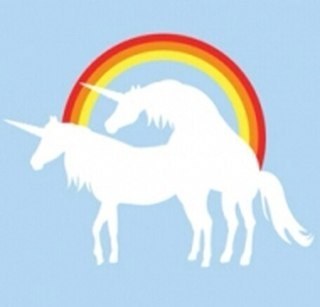