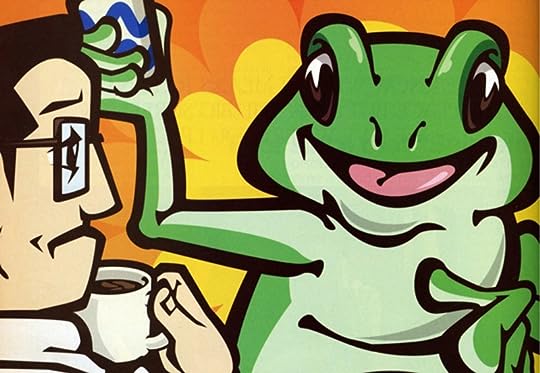 “Yes, of course, as you can see. A real frog is exactly what I am. A product neither of metaphor nor allusion nor deconstruction nor sampling nor any other such complex process, I am a genuine frog. Shall I croak for you?”

“Fine, I see, I see!” Katagiri said, worried about the thin walls of the cheap apartment house in which he lived. “That’s great. You are, without question, a real frog.”

“One might also say that I am the sum total of all frogs. Nonetheless, this does nothing to change the fact that I am a frog. Anyone claiming that I am not a frog would be a dirty liar. I would smash such a person to bits!”

well, jeez. even though i have yet to be absorbed into the cult of murakami, after reading this story i at least understand why the cult exists. it’s a coy little flip of literary fabulism about a lonely man with a shitty job who is approached one day by a six-foot tall conrad-and-tolstoy-and-dostoevsky-referencing frog who appears in his apartment one night asking for his help fighting capital-w worm in order to prevent an earthquake and save tokyo.

is one way to read it.

‘course, we are told more than once that “What you see with your eyes is not necessarily real,“ giving the reader the freedom to doubt as much or as little of the story as suits. truth, allegory, fever dream, fable? have it your own way!

it’s weird and funny and full of grotesque imagery, so maybe i will give him his third chance with a short story collection? three strikes and you’re out, though.