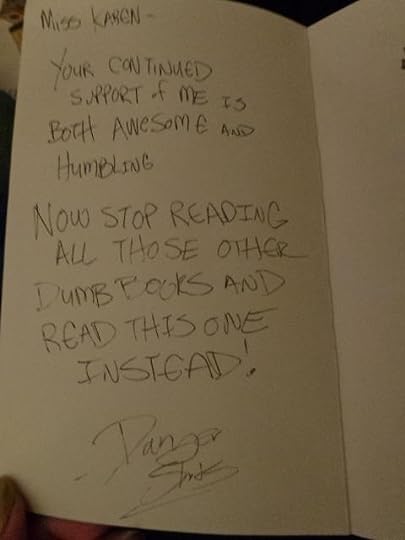 so this book has two novellas in it: computerface by kevin strange and roadvolution by danger slater. ergo: stranger danger.

computerface is about a man who managed to survive the robot uprising more or less intact, except for a pesky ipad welded to his face, making it very difficult to explain to fellow trigger-happy survivors that he is not, in fact, a robot himself. but it’s okay, because in his former life, he was kind of a dick. but not Philip K Dick, who also makes an appearance.

plenty of killer robot action and children reduced to bloodspray and regret and an overlooked note as devastating as that one that went under angel clare’s rug. d’oh!

here are some examples of the fine writing:

–“You look like a giant baby who ate a bag of dicks and babies.”

–As he landed back on the ground, he slammed the soggy bodies against the floor, picked them back up and smashed them again and again, until they were little more than messy smears, their shrieking madness ending long before the final blow was administered.

–With this, everything changes.”

–He needed more meat for his blades.

–Every one of the awful machines had one thing in common: they were designed to drive humans insane.

roadvolution is about what happens when that irish blessing of “may the road rise up to meet you” is adapted to “may the road rise up to eat you.” ditto for the lincoln tunnel. and the george washington bridge. it is the deadliest of commutes, where a punk rockabilly chick and a stuff-obsessed douchebag will try to overcome both the dangers of the road’s rage and the scathing criticism they hurl at each other to live to fight another day.

here are some examples of the fine writing:

–“We’re the scabies scuffing our way across the skins of things far greater than ourselves.”

–Her rib cage erupts outward like a pinata; viscera, poop and other assorted innards spilling from her torso like Mexican candy. The organs and guts and all that other pink gooey shit that once made her alive are now splattered across the dirt like an impressionist painting.

–The Lincoln Tunnel dives back into the ground with the ease of a dolphin dipping back into the water, kicking its tail up as it disappears beneath the soil.

–It’s too fucking hot out right now to worry about my carbon footprint.

you’re gonna have to read that one yourself—if i type out quotes, i will definitely puke.

AND THAT’S MY REVIEW OF THS BOOK!