this book is not going to win the pulitzer, but if ponies ever become wishes and they start giving out literary awards in the category of “fun, funny slasher novels,” this book will have a very good chance at winning one. it’s a very simple premise centering around the manderley – an ultra-luxe hotel with an ominous name, complete with a mandatory horror-hotel hedge maze, secret passages, an excruciatingly slow glass elevator, and asking-for-it white carpeting. on the eve before its opening night gala, the staff, hurrying from room to room making sure everything is impeccable for the overbearingly perfectionist owner charles destin, are spectacularly, splatteringly murdered one by one by unknown assailants, while security cameras feed footage to the twentieth floor monitors and to the individual within who is watching everything unfold. because, as we are told – The best security is invisible security. The most thorough safety is safety one’s object of protection doesn’t know about, so there are cameras that the guests and staff know about, and then there are … other cameras. so many other cameras.

it’s a slow reveal book which operates within the understanding fans make with the slasher genre – you know what’s going to happen to all the poor souls within the frame of the story, but you don’t know how or when. and, as far as modern horror understandings go, you know that at the center of it all will be a strong and capable woman who’s gonna dig deep and surprise all comers with her fight-back skills and her lateral thinking in a crisis.

and – spoiler alert for the movie you’re next:

so here, the sharni vinson role is played by tessa, the most efficient hotel manager ever. a good hotel manager can smile politely in the face of a cranky overprivileged guest’s tantrum and find a solution to placate and mollify their outrage. a great hotel manager can do that while covered in someone else’s blood.

“Look, Charles thinks this is a game. And what you and your team mostly do is cry wolf. But if a wolf comes at me? Last thing I’m doing? Is crying about it.”

tessa’s got a hundred-tick checklist to deal with and the last thing she needs is a man from her past popping up again after eleven years and stirring up emotions when she’s dealing with a french chef’s hissy fits, a broken dishwasher, an owner verbally abusing the entire staff, electricians who are ready to walk, and now this head on the mantel. 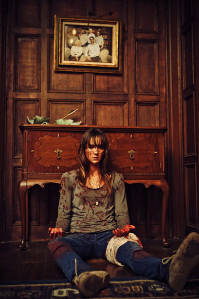 the obvious criticism one could make (and may already have made – i haven’t looked) is that “it reads like a screenplay,” but to me it doesn’t. in my head, i can see someone excited to film this, but i think it would make a really mediocre movie. there’s something about this that works as a book that wouldn’t as a movie, and i think a lot of it has to do with the power of a reader’s imagination vs. the budget limitations of your average horror film and the same vs. the average acting ability of actors willing to appear in slasher films, regardless of how clever they are. (minus christian bale, who looked like he was having a fun time in a shitty adaptation) i think this would be a completely forgettable movie, but as a book, although it follows horror movie conventions to a t: insert sex scene here, place close call here, foreshadow object here, use as murder weapon there, &etc., it was genuinely intense and it surprised me with some of its moves. i also loved the voice of the “watcher,” who is responsible for the tone of the story; equal parts detached/robotic and funny, which tone would be lost in a cinematic version.

Brian is attacking the grease on his hands with a kitchen towel. The towel has red stains on it, most likely cherry coulis. One cannot rule out the possibility that the stains are not cherry coulis.

which, now that i think about it, is one of the reasons that adaptation of American Psycho didn’t work for me – the narrative tone being the strongest appeal of the novel and sidelined in the film.

it’s very cleverly done, and as the “camera” of the narrative pans back to show us more of what it is we thought we were looking at, it just gets better and better until the end actually did make me feel something. ME! with FEELS!

it’s not as high-concept as cabin in the woods, and it’s definitely more horror than humor, but it’s smart, funny, and bloody, which is all good things as far as i’m concerned.