Review of My Cat by Tanner Ringerud, Jack Shepherd
My rating: 4/5 cats

this is my cat maggie: 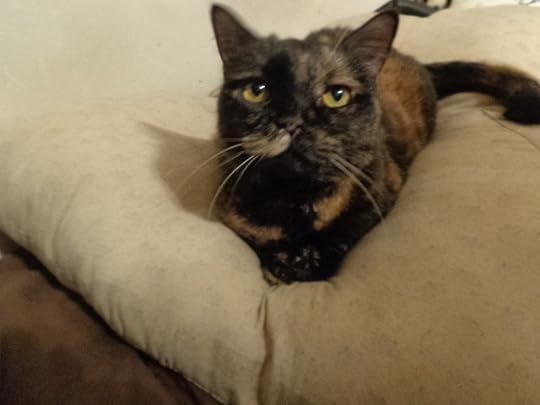 this is my review of my cat, using the guidelines offered in this book and its site: http://www.reviewofmycat.com/

anyone who doesn’t give their cat an A in this category is an asshole. i was genuinely surprised to see so many people giving their cats passing or low marks in this category. it made me want to go over there and stomp on those people and remove their cats from their horrible and judgmental assessments. i mean, my cat is particularly beautiful, yes, but saying a cat is “too fat” just means you are an asshole. seriously.

maggie is social on her own terms. and i expect nothing less. if i wanted a pet who was going to jump all over me and be demonstratively loving and loyal, i would have gotten a dog. she will allow me to pet her until she wearies of me, and then i get a swat, usually with claws retracted. sometimes, she is a little less polite about it and then i get the claws, but that’s my own fault. she really likes to be petted when she eats, though, which i think is adorable. mostly, she likes to be near, but just out of arm’s reach. so, not the most social, but whenever i am sad or sick, she will come over for snuggles. can’t ask for much more.

again, i’m not sure just how useful a cat can be expected to be. would she rescue me from a fire?? probably not. would she call 911 if i had a seizure? not likely. but she does make me happy, and that’s pretty useful. when i sing in the shower, she will pad into the bathroom and sit on the toilet seat, so she is a good audience, and every time i get out of the shower, concert or not, she will lick my arm, saving me tedious arm-drying time. also, if i ever have anything that is not shredded: a bag, important documents, my old prom dress – i know that sooner or later, she will take care of that for me. usually at 4 in the morning.

she allows very brief hugs. i have learned to get them when and while i can. after that, there is squirming and then usually a beeline to the food bowl as though she expects some kind of reward for the trauma i have caused her. i have resigned myself to the “short hug,” which is a modified hug where her hind feet do not have to leave the floor, and i just bend over and pick her up by her front paws, center her spine against my chest and rub her toe beans gently, hugging lightly around her and smelling the spot between her ears before easing her back down. this seems acceptable to her.

overall grade – A plus

yeah, i was never very good at math. but i do love my cat.