Almost anything is tolerable, provided it’s not for ever.

hey, that’s how i felt about reading this book!

okay, that was just a cheap laff but real talk—this book went way over my head. i read it in february and now it’s may and i have zero memory of it, but honestly—if you’d asked me what it was about back in february, i would probably still have been unable to answer you.

and it’s such a shame because i adored Follow Me to Ground enough to import this one into my country and when it arrived, i gasped at how beautiful the cover was—can you see the glittery sprinkles? 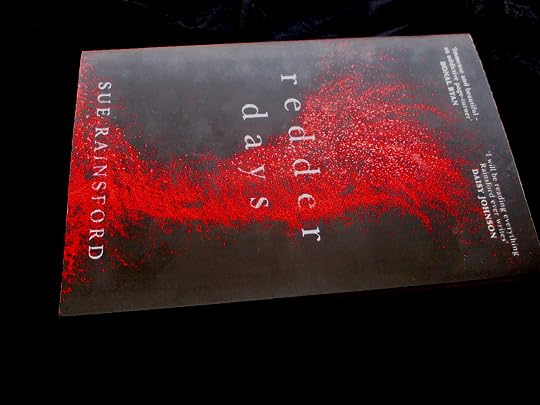 i can’t seem to capture it, but seriously, it’s like this:

and everything i loved about that one is in this book, too—the lovely poetic prose and dark ambiguous tone, but with Follow Me to Ground, while i didn’t understand everything that was going on, i understood enough. with this one, i had to stop a couple of times to read the flap synopsis just to remember what this was supposed to be about.

it’s a cult and twins and one is diurnal and one is nocturnal because cultrules, and their mom abandoned them, leaving them behind with koan, the cult’s leader, and there’s a situation like a plague turning biological entities red and that’s bad and shameful and people with the red need to be killed and i think someone gets killed who shouldn’t have been and there’s twincest and some of the plot occurs before the red and some after and the early stages are marked by people obsessively succumbing to pleasurable impulses, which are not necessarily sexual in nature but become so in the giving oneself over to them—a man begins to purr because he likes the way it feels and this is…bad?

I know what I know
The mouth is an orifice that should not weep red.
Old men should not purr.

it didn’t really come together for me, plotwise, but the prose is so sharp and striking and beautiful:

Feeling of being a bowl of broth someone wants to eat before licking clean the spoon they ate you with. Thinking If I’m to be eaten best make sure I’m scalding hot, best make sure their tongues are blistering.

but it wasn’t ultimately enough—i need a story. Follow Me to Ground was a weird-ass story, but i could follow it, this one i just could not and it makes me feel bad about myself.

i can handle a slowburning book where you don’t know what’s going on…until you do, but here i never got that moment of clarity that lit up the surroundings. this seems like obfuscation for obfuscation’s sake and that doesn’t work for me—for a long time i felt like i was just turning pages instead of reading and nothing really got absorbed because nothing was solid enough to hold on to, it was just one slippery scene after another.

trying to review this book is breaking my brain so i’m going to abandon ship and let her drive.

Slow sun today, taking its time in rising and setting and so my knees feel torn with the drawn-out devotion. Down to where the grass turns crisp with the sea and then further to where the wolves sometimes do their savaging, the soil there reddy with little cubs’ bleeding. The wolves will die out if they’re not careful, killing off their young. But then all they’re doing is all any of us can do, which is the thing that makes sense at the time.

This is how we grew up: living inside a mistake until someone told you otherwise, and then living inside the shadow the mistake had made.

People overcomplicate Nature because they think her driven by something crude and fallible, something akin to human logic, and so they detect false errors and instances of cruelty.

The simplest answer, the route most direct: that’s what we must look to.

What we know: when an interior, biological shift occurs within a species it is in response to an alteration in that species’ environment.

What else we know: this new environment is proving more hostile to some of us than others.

Not an extinction, then, but a purge.