i am a huge fan of animal-horror books. i don’t care about the type of animal or the quality of the writing—if there’s a monsterfied animal running amok and attacking folks, i am there, rooting for nature.

first things first: if you are an animal enthusiast 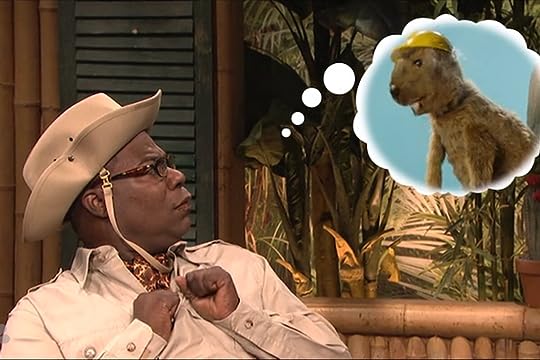 you will already know that there is a difference between a possum and an opossum. 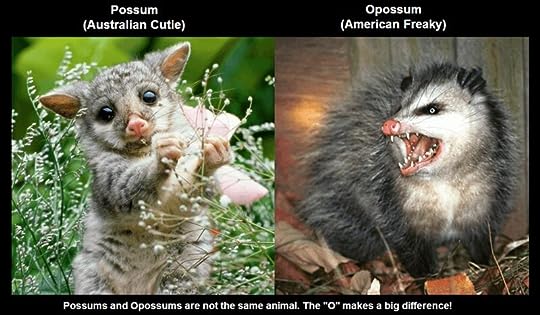 i disagree with that cutie v. freaky distinction, since i think opossums are every bit as cute as their australian counterparts 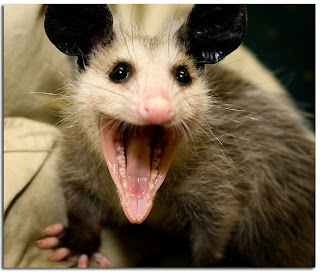 but in this book, and to most people stateside, these critters are ‘possums,’ dammit, and that silent “o” gets dropped like it was never even there because silent letters are for suckers and if you want to get noticed, it’s better to scream. 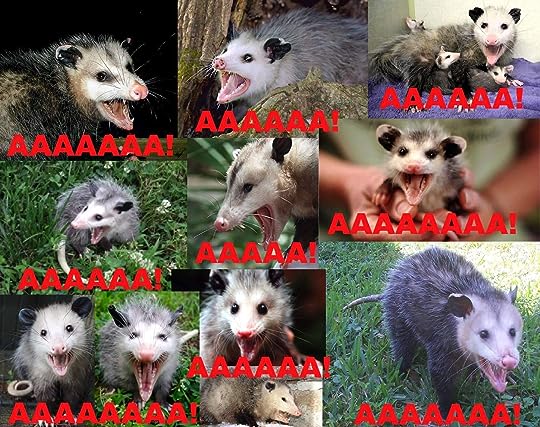 i know a lot of people have knee-jerk negative reactions to possums, with their plague doctor faces and graspy-tentacle tails 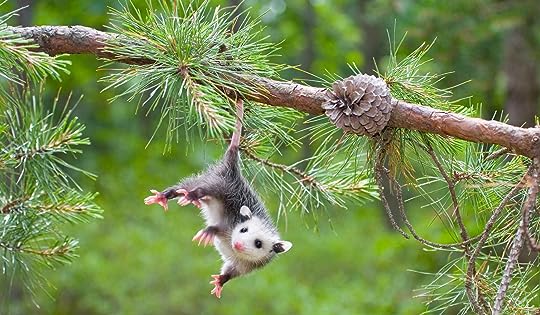 but they’re harmless little critters; their defense mechanism is pretending to be dead, for goodness’ sake, and all that hissing and tooth-baring ain’t nothing but bluster 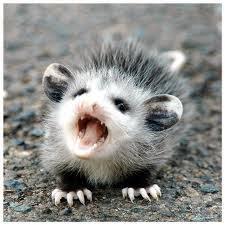 as sophia, the book’s preteen possum advocate, has learned from animal advocates on the youtube: “…it’s near impossible to provoke a possum into biting you. They’re sweethearts.” 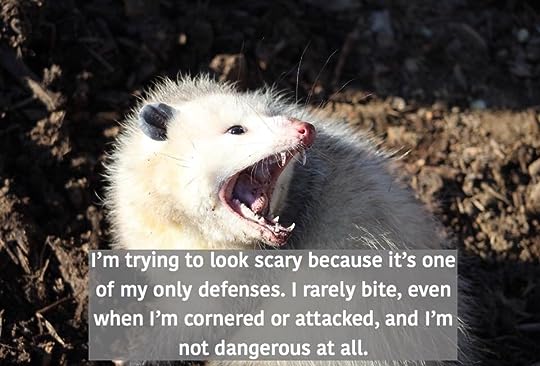 they eat ticks and cockroaches by the thousands, they’re essentially immune to rabies, and they’re the only marsupial we have in the u.s., so we should cherish them and give them all of our bananas.

however, it must be said: possums do not give a fuck. i was leaving my friend’s place one night, and as i opened the door to the foyer, i noticed a possum waddling down the stairs approaching the exterior door.

i crouched down to say hello through the glass because i am a Friend to the Animals, and that mofo hissed at me. 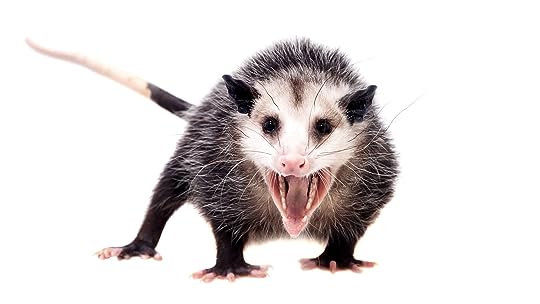 it then waddled back up the stairs and i opened the door, whereupon it looked over its shoulder at me and hissed AGAIN, like i was the intruder preventing him from getting to his apartment.

i respect that attitude.

another thing possums do not give a fuck about is genre conventions. in this book, the first victim of the monstrous marsupials, whose bites turn people into human-sized possums, is the one who would ordinarily be the final girl: a good and decent young woman who storms out of her boyfriend’s place after calling out his friends on their racist jokes. true, she accidentally hit the possum with her car, but she was trying to HELP it when it attacked her. 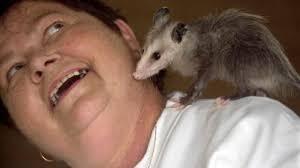 and what about the aforementioned sophia—defending their reputations, rescuing a batch of baby possums from the pouch of their dead mom, feeding them kitten formula and calcium supplements with a teensy eyedropper and trying to save their lives. do the possums spare her? 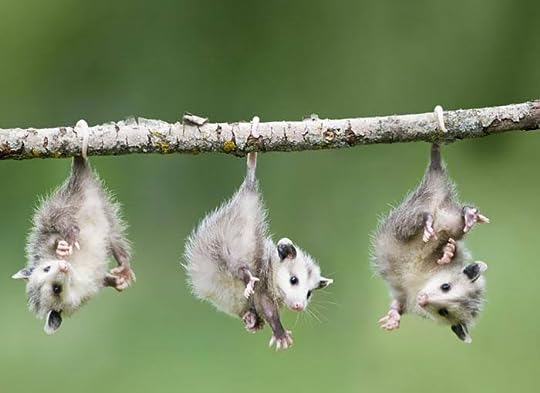 no spoilers here, although i will disclose that possums can really RUIN a wedding reception.

this one is great fun, and it ends with what i hope is a foreshadowy tease for another book, featuring another species.

fun formatting facts: there are no page numbers, it skips from chapter nine to chapter eleven (but there’s no missing content; chapter ten is just silent like the opossum’s o), there’s a secret code for those of you who speak languages or are tattoo artists:

my favorite formatting idiosyncrasy is that the trigger warnings are AT THE END of the book. no, i won’t tell you what they are. animal horror is strictly survival of the fittest.

fun fact that isn’t about formatting: the very morning i started reading this book, i was hand-feeding a squirrel (see above: Friend of Animals) and it misjudged what was me and what was nut and it BIT my thumb! i have not yet turned into a squirrel, but i’m still holding out hope. and nuts.

this book is part of a series of killer-animal books whose faux-distressed covers were designed by kealan patrick burke: 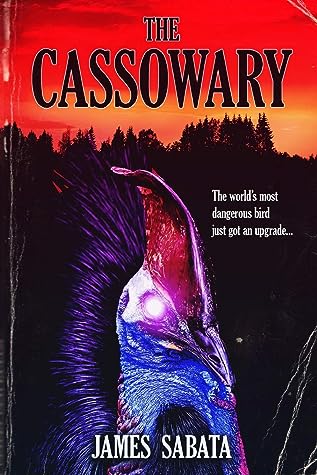 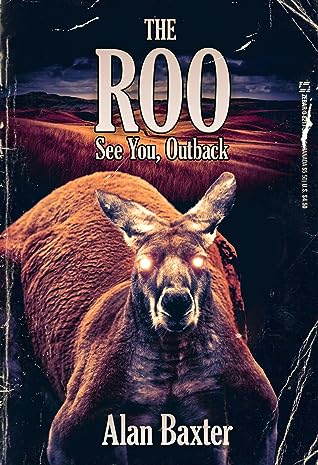 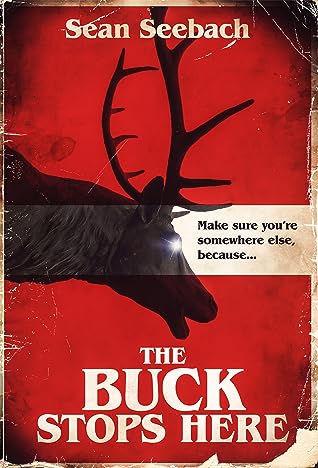 i have already read The Roo and both The Buck Stops Here and The Cassowary are on their way to me as i type this, but i have only been able to find ‘dillo mentioned online, with no way to throw money at it and have it here in my home. 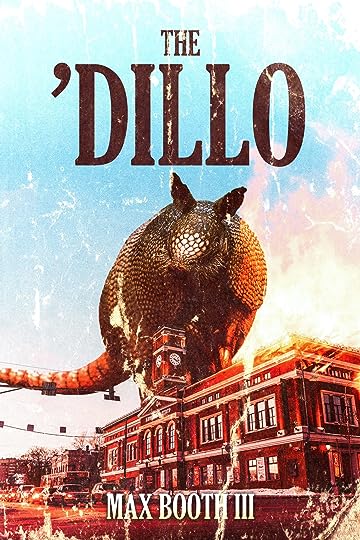 holy shit, i just learned she wrote Backyard Zombies, which i read YEARS AGO for a project. small world!