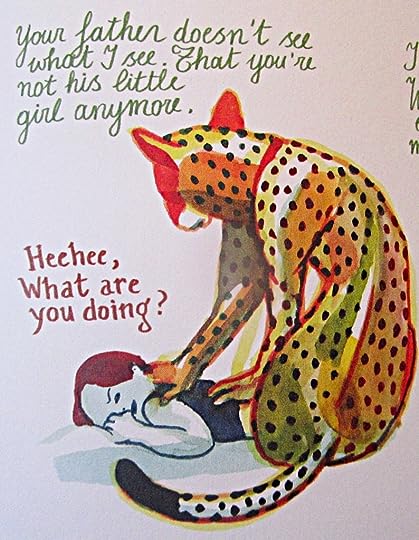 Larisa LJ recommended this book to me on the thread for my review of Beautiful Darkness, because at the end i was marveling at how much i loved the ickiness of the book, and how revolting it was:

but revolting in that way that totally rejuvenates me because i love knowing i can still be horrified.

i really want a sequel to this, or a rec for a book that is as gorgeously repellent, horrifyingly alluring, beautifully dark.

consider me hit by this one. hit so hard. this book makes Beautiful Darkness seem like a cute little children’s adventure story by comparison. View Spoiler »yeah, Beautiful Darkness – the book where a girl pokes out a giant mouse’s eyes with her thumbs, a character takes up residence in the skull of a little girl’s corpse and eats the maggots that begin to infest her new home, and a bird rams its beak down a child’s mouth in an aggressive feeding situation that kills the child. « Hide Spoiler all of THAT is less disturbing than this book.

christine is a little girl living alone with her father after View Spoiler »the apparent suicide of her mother. « Hide Spoiler her beloved cat lucy becomes sick and while christine is at school, lucy dies. 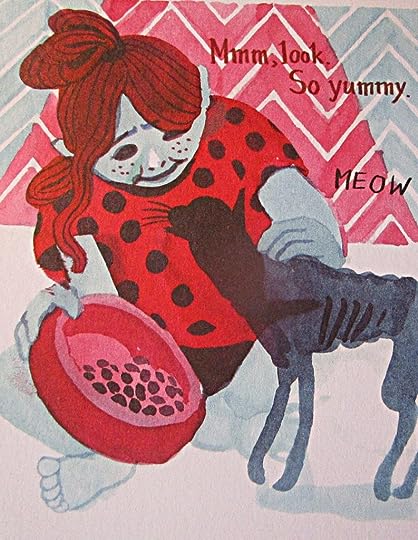 while christine is grieving for lucy in her room, a creature emerges from the bottom drawer of her bureau, attracted by the sound of her crying.

this is panther, the crown prince of pantherland, and he’s here to cheer christine up and tell her magical stories and be her playmate to distract her from her loss. 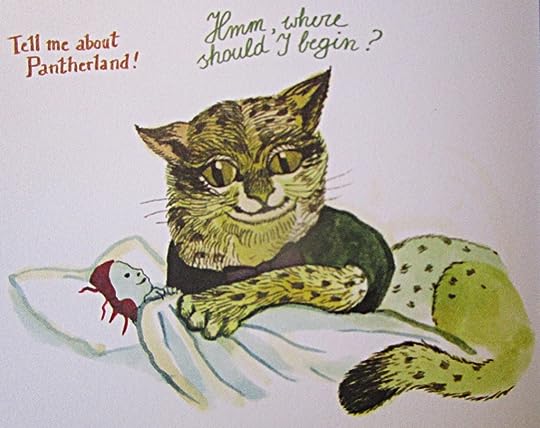 at first, everything is magical and jolly, but there are some red flags popping up – panther already knows christine’s name, he keeps adjusting his stories, responding to christine’s reactions to them and smoothly backtracking and re-tailoring them accordingly. on the one hand, it could be written off as panther trying to be the best imaginary friend possible – to be everything she needs, but there’s a sinister undertone to it – a manipulation, or even a seduction, of a vulnerable little girl, and he is stronger, bigger, more physical than christine. 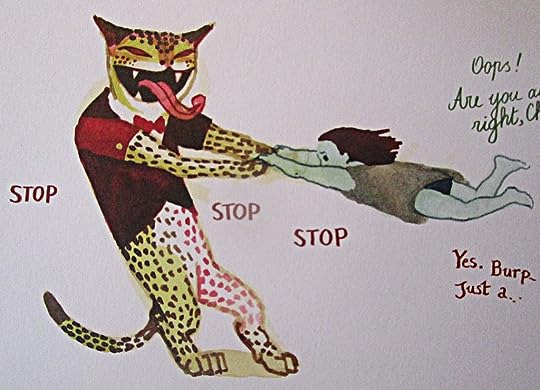 panther is drawn differently in every panel, emphasizing this chameleonish quality; the way he is able to adapt to each new situation or response from christine, and his speech is written in cursive, while hers is in block print, suggesting that panther is older, more sophisticated and experienced in the world. 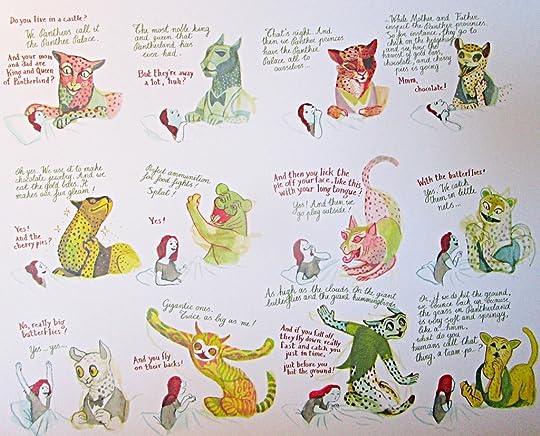 christine loves her boisterous imaginary friend, and if he is occasionally inappropriate in his play with her, it can just be written off to the high spirits of a creature unaware of the boundaries and standards of behavior in the human world. no one is outraged when a dog sticks its nose in a human’s crotch, after all… 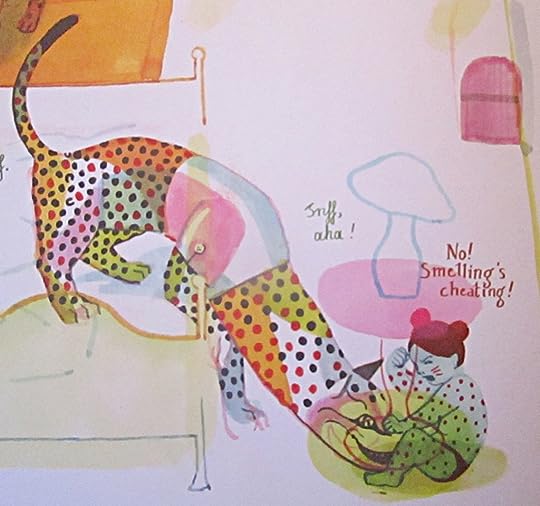 or at a cat for grooming a pal 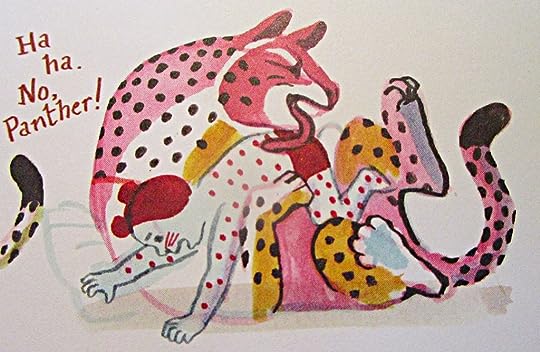 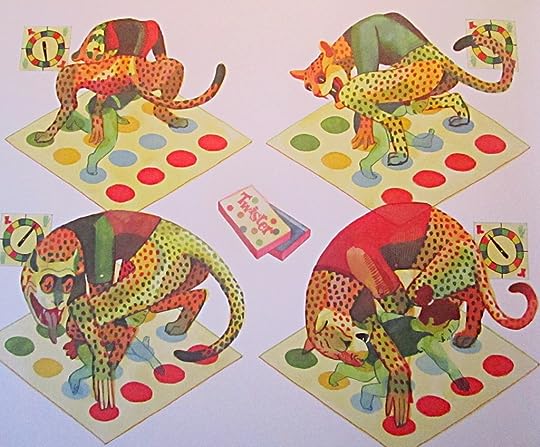 theirs is a close, cuddly relationship, like one would want to have with a giant imaginary cat – lots of snuggling, tickling, and massaging, but there’s a secrecy to it that’s mildly alarming – christine’s hiding of panther’s existence from her father, panther’s telling her not to open the bureau drawer on her own, and his suggesting that she ask her father for the keys to her room so she can have privacy. it’s a friendship with many shadowy areas. 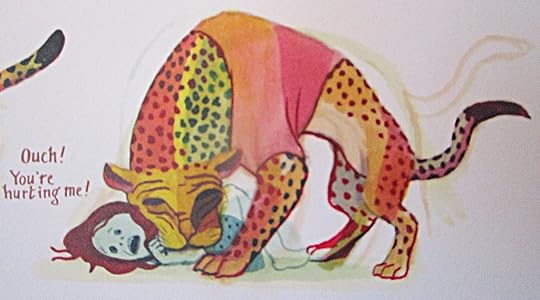 and the thing is – the thing that makes this book so gut-wrenching – is that nothing is overt. there’s not much you can point to and say – this is what is happening here. there are hints throughout, but they are brief, ambiguous, quickly twisted-away from with feline dexterity and buried under hearty friendly cheer and bluster, leaving the reader doubting their own suspicions. which doubt, when you re-place the situation into a real-world context, makes the book even more chilling.

but then, one of christine’s toys – bonzo – goes missing, after trying to warn her of panther’s seductive charms, and when he returns, emerging from the drawer-portal to pantherland, he is … changed: he can talk, he is more aggressive, and he has many vaguely frightening things to say.

and then panther throws a surprise birthday party for christine, attended by several visitors from pantherland, and what was once a subtle dread becomes unequivocally so, and the aftermath of that party is shattering. 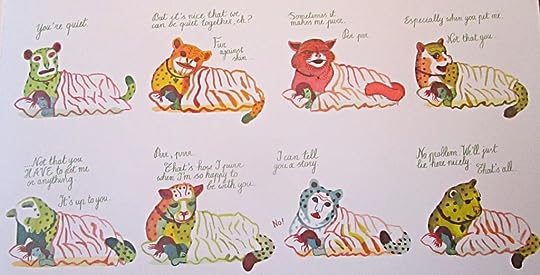 it’s a dark little book, made more so by the brightly-colored whimsy and kiddie-ness of the artwork. the ending is more suggestive than conclusive, and it kind of dumps the reader abruptly which, after a journey so sick and wrong, is very effective. we’re left somewhat complicit, with many conflicting feelings, unsure what is real, what is fantasy, what is coping mechanism, but quite shaken. and, from the interview linked in david’s review, this:

Dueben: Why did you decide to make the book in this particular shape? Were you trying to echo the shape of picture books?

Evens: Exactly, a book disguised as a children’s book. Which is not to say that I don’t want children to read it–I do.

considering how wretched this book made me feel, i would suggest maybe NOT letting your children read it. again – it’s not incredibly obvious what is happening, but there’s enough on-page to cause serious discomfort, even to readers who might not be able to extrapolate what is being suggested. and to children who, horribly, may understand what is being implied, that’s just gonna be an additional psychic scar they don’t need.

four stars cats because it’s so powerful, but it’s not a pleasant book, and it’s most emphatically not for sensitive readers.