One of Us Will Be Dead by Morning by David Moody
My rating: 4/5 cats

this book begins on page three. by page five, there is already a body count.

that’s what happens when haters are afoot.

and what are haters? haters are like superfast zombies

without the whole grubby ordeal of death and decomposition. but it’s not braaaaaaiiiins they crave, it’s paaaaaaiiiin. your pain. and, consumed by impulses they cannot control, they won’t stop inflicting pain until their victim is dead, and then it’s off to find something new to hurt. it’s a sudden-onset phenomenon – one minute you’re fine, the next, you’re killing your spouse without hesitation or provocation. and there’s no way to identify a potential hater from an unchanged (at least, not in book one!) until they (or you!) just…start..stabbing!

so this is book 4 in moody’s hater ouvre, and the first book in a second trilogy. you got that math? this one takes place on a remote island on the same chronological pieslice as the events of Hater are occurring on the mainland.

i read the first trilogy between 2009 and 2012, and i wrote three spectacularly unhelpful reviews for them – good job, younger karen! – so i don’t remember a ton about them, and any thoughtful easter eggs or nods to the first book here are lost on me. i thought all of them were written from the POV of an infected “hater,” but it might have only been the second and half of the third. who can say? however, i DO remember the basics, so a lot of the material covered in this fourth book – where it’s a frantic blur of “holy shit, what is happening and what can we do about it?” and on through the information-gathering and the not fully grasping the situation and the mistrusting those around you and yadda – that felt all “been there, done that” to me. and i know this is the first book in a new cycle, so there are new readers who need to learn what’s what and old readers who forgot the deets of so long ago and maybe read my spectacularly unhelpful reviews and remained fuzzy on the particulars, but it still feels like a lot of time is spent here going over the same ground. and even just within this book – the characters are very slow to adapt and accept, so there are a lot of very repetitive arguments and a lot of time-wasting resistance* and beating of dead horses. however – all the parts that aren’t those parts – the parts where the beatings are being inflicted on living people, well – that is some seriously scary stuff. scary because vicious killers, but also psychologically dicey since being stranded on a tiny island with extremely limited resources, with a handful of work-acquaintances and virtual strangers is nightmarish enough without the additional headache of struggling to comprehend why some of them are suddenly turning into violent, unstoppable predators, and being forced to navigate that superfine distinction between killing due to uncontrollable bloodlust and killing as pre-emptive measure against being killed by someone who might be experiencing uncontrollable bloodlust. i don’t know about you, but my co-workers are the last people i wanna be navigating that tightrope with. okay, after “subway randos.”

so, apart from some draggy (to me) bits, this is a real splattery treat. i am very excited to see where it goes from here, even if i NEVER remember what happened in the first trilogy. it’s such a fantastic concept, and the jaggedy fear of never knowing if the person standing next to you, or a person you love, or you yourself are about to snap and start rampaging is so deliciously tense.

this one made my “titles that lie” shelf because although it is absolutely a fantastic title, “one” is a gross understatement of who-all’s gonna be dead come morning. and there are a number of mornings over the course of this book, resulting in mounds of corpses.

as an homage to one or another of my spectacularly unhelpful reviews, please enjoy this song.

and as a super-special bonus, i discovered today that there’s a free short story bridging the first and second book in the first trilogy (get out your calculators), and there is ONE day left in my december advent calendar project, so guess what imma read tomorrow? (although get out your time machines, because i’m probably not going to post this review to the feed until sometime next week. and then lend me your time machine so i can go back to when i read the first three books and write better reviews for them. because that is the best thing i can think of to use a time machine for. and probably why no one will give me a time machine.)

* dear potential survivors in unprecedented situations – when three different people tell you they saw something horrible on video footage, don’t push back. arguing and doubting this intel is a waste of your time and my time and a terrible way to stay alive. just say “why thank you for telling me this. i will use this information to prevent myself from being murdered.” 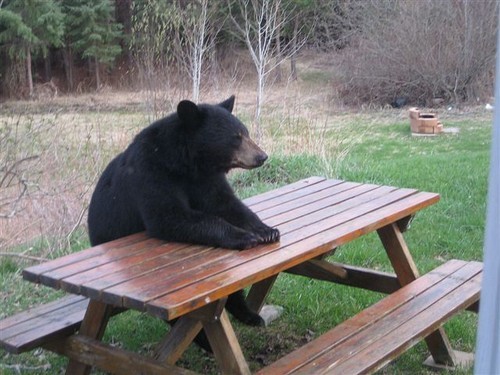 if you wait patiently enough, every series continues.

of course, i did not learn the lesson of patience too well; i bought this book the day it came out and then, wouldn’t you know it – i got my pagehabit horror box in the mail: 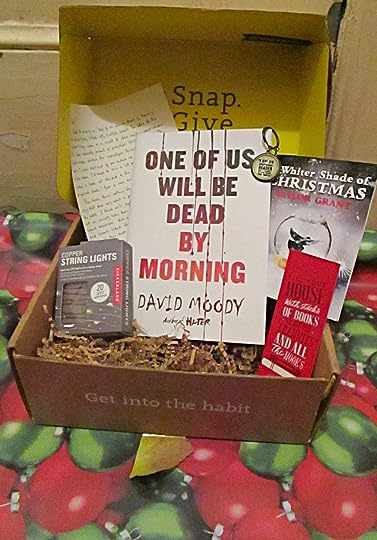 but i don’t even care – i returned my boring, unannotated copy to the store and now i get to read this much-cooler copy with notes by david moody himself (EEEE!) and christmas lights and a cool keychain and short story and BOOM! an end of 2017 miracle!

2018 resolution = have more patience. especially when it comes to buying hardcovers, you pauper!